Pushing Together by Pulling Apart: "The Fantasticks," at the Richmond Hill Barn Theatre through August 21 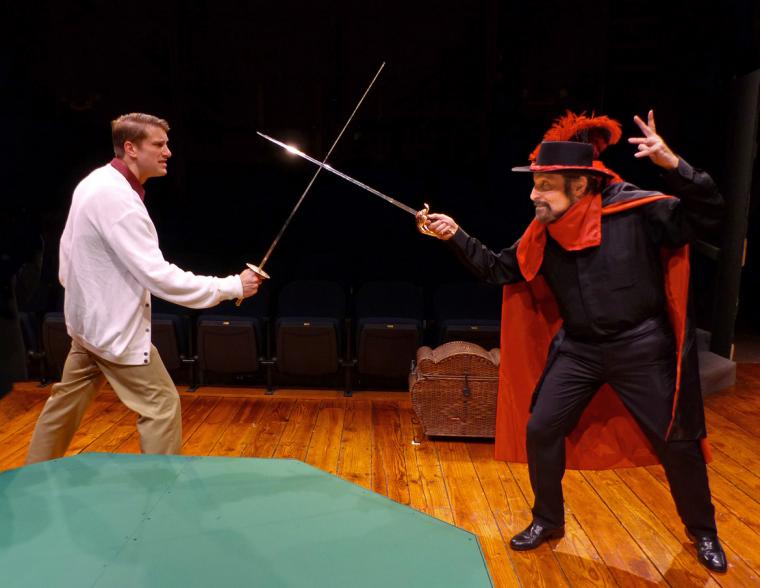 Victor Angelo and Joe LoGiudice in The Fantasticks

The Fantasticks, the 1960 musical with a score by Harvey Schmidt and lyrics and book by Tom Jones, is a love story with a twist, and the Richmond Hill Barn Theatre production that I saw on August 11 offered some sweet moments propped against a score I did not particularly care for. Its central idea and story, however, I loved.

The show begins as your typical Romeo-and-Juliet tale, with two fathers trying to keep their son and daughter away from each other by building a wall between their houses. But little do the children know that the fathers actually want them to be together, which they reveal in a cute song ("Never Say No") that describes how, as a parent, the only surefire way to get your children to do something is to tell them not to do it.

Victor Angelo plays the young, star-crossed lover Matt, and I was blown away to find out that Angelo is a real-life father of three, as I fully believed he was the 17-year-old that Matt was. Grace Burmahl portrays his girlfriend-over-the-wall Luisa, who, at the top of the show, wants nothing more than to be special, even praying, “Please, don’t let me be normal.” Burmahl delivers some fine, emotional acting, and her singing on Thursday was powerful, if a little too loud, at times, for the intimate space. Matt's and Luisa's fathers Hucklebee (John VanDeWoestyne) and Bellomy (Bruce Carmen) want desperately for their children to get married – so much so that they stage an abduction of Bellomy’s daughter by the show's narrator El Gallo (Joe LoGiudice). Their idea is that Matt can jump into the fray, rescue Luisa, and the youths will fall in love and live happily ever after, which is exactly what happens … at the end of the first act.

Carmen offers an expressive, quite vaudevillian performance, and VanDeWoestyne owns every second of his stage time and has a wonderful tone to his voice. LoGiudice keeps the pace moving along nicely, although at times it was a little difficult to hear him when he started singing (possibly because several of his songs' low notes were beyond LoGiudice's vocal range). And his fellow storyteller, simply called “The Mute,” is played by Diane Greenwood, and it was a pleasure to watch her facial expressions throughout the entire production. Even when not directly involved in the action, Greenwood viewed the proceedings from the sides of the playing area, and always suggested that she was witnessing events for the very first time.

Two others who offer help filling characters as needed are Henry, a self-proclaimed “brilliant” actor, and Mortimer, who it's said can “die better than anyone.” These two misfits are played by the very funny Ray Rogers and Michael Skiles, and one particular highlight found the latter enacting an incredibly dramatic, incredibly long death from a mimed bow and arrow. Structurally, The Fantasticks is loose, and really asks the audience to stretch their imaginations – a concept I appreciate (and, as an occasional improv comedian, am familiar with). Using broom handles for swords, and sprinkling confetti to symbolize snow and rain, the cast members also sometimes just mime their props, and I especially enjoyed the show for creating a sense that this “band of players” just threw this together using whatever was backstage.

Nancy Green does a splendid job as the production's accompanist, seen in full view of the audience and occasionally even allowed to interact with the actors. Director John Donald O’Shea, meanwhile, made strong use of the space, utilizing the entire playing area for Richmond Hill's theatre-in-the-round seating, and designer Jennifer Kingry contributed beautifully lit moments when characters were bathed in moonlight.

Overall, The Fantasticks was a fun story to watch, even though most of the music wasn't to my taste – all but two or three of the tunes are of a slow tempo with unmemorable melodies – and a few cast members seemed to struggle a bit with pitch. But if you’ve never before seen it, Schmidt and Jones do offer a new spin on an old story. Or rather, an old spin on an old story. Regardless, it does provide an intriguing look at what happens after “happily ever after.”

The Fantasticks runs at the Richmond Hill Barn Theatre (600 Robinson Drive, Geneseo) through August 21, and more information and tickets are available by calling (309)944-2244 or visiting RHPlayers.com.