River Bandit's Game: “The Robber Bridegroom,” at the Timber Lake Playhouse through August 15 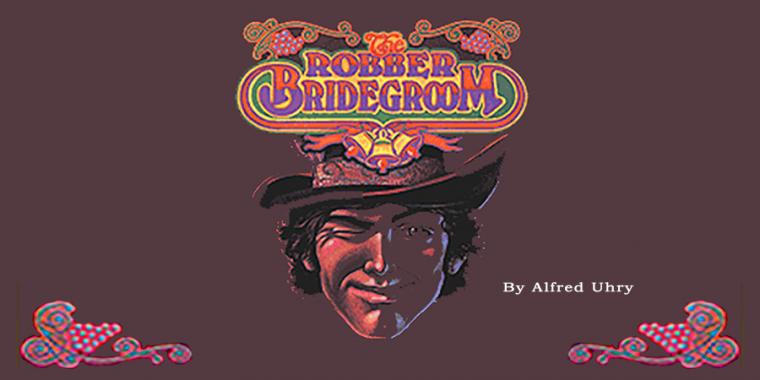 It was a lovely summer evening at the Timber Lake Playhouse on Friday night, with glowing stringed lights hanging throughout the campground that added a tranquil feeling outside. Inside the theatre, it was equally pleasant, with the welcoming, rustic set design by Sherri Howells providing a fabulous, bluegrass-and-country playing area for the venue's latest musical presentation The Robber Bridegroom.

Directed by Dan Danielowski, with its music direction by Michael McBride, this musical ran on Broadway in 1975 and 1976, and with its book and lyrics by Alfred Uhry and music by Robert Waldman, the story takes place in the late 1800s in Rodney, Mississippi. The main character, Jamie Lockhart (Jack Hale), is a gentleman and robber all in one, with his alter-ego The Bandit of the Woods boasting that he “steals with style” as he makes his way through the forest in which he meets the gorgeous young Rosamund Musgrove (Quinn Martin). What ensues are a lot of mayhem and hilarious situations that seriously cracked me up.

Hale, on Friday, projected his voice easily across the auditorium with absolute control and precision; I thoroughly enjoyed his singing, and his comedic timing was excellent. The actor donned a black leather vest, bandana, and cowboy hat furnished by costume designer Elizabeth Cipriano, and he often had his hand carefully resting inside his vest pocket to add to his charming cowboy persona. Hale also sported a naturally grown light beard and mustache that completed his look.

Martin, who is as cute as a button, wore a long, blonde wig courtesy of hair and makeup designer Corey Cochran, who also did an outstanding job on the actresses’ soft and subtle makeup. During one particular scene, Martin contorted her face in the funniest of ways as Rosamund tried to make herself look undesirable to a potential suitor. This leading lady has a naturally beautiful voice and was particularly sweet when singing over the resting Bandit in her solo performance of “Sleepy Man.”

There was an abundance of square dancing – and even one contemporary dance – impressively choreographed by Emma B. Resek. And to make everything more authentic-looking, Cipriano's Robber Bridegroom costume designs consisted of long skirts and dresses with bonnets for the women and assorted styles of cowboy hats and bandanas for the men. One of the main characters, Luis Garcia-Godoy's Little Harp, even wore a knife tied to the front of his hat to add to his mischievous personality.

Godoy did a wonderful job in the role, his crazy eye stares and strong singing ability bringing his character further to life. Like Little Harp, his sidekick and brother Big Harp, portrayed by the extremely animated Joey LaPlant, found himself in a very unusual situation as the play progressed, and this pair of actors were hilarious in their song “Two Heads.”

One of my favorite musical numbers was delivered by Margot Frank in her role as Rosamund’s wicked stepmother Salome Musgrove. As she sang “The Pricklepear Bloom,” Frank totally embodied her character and left it all on the stage with her sassy presentation of an older woman lamenting about her fading beauty and aging body.

Darren Mangler played Rosamund’s father Clement Musgrove, a man who constantly pampers his daughter while comparing her beauty to that of his first wife. (All of the attention Rosamund gets, of course, infuriates Salome, and she becomes exceedingly jealous.) Mangler was perfect for this part, and did an excellent job bumbling about and spitting out his lines in an exaggerated, boisterous way.

Another very funny performance was given by Josh Lee as Goat, a boy with, as we're told, “a brain the size of a scuppernong seed.” Salome enlists Goat to carry out her plans to kill Rosamund in exchange for a suckling pig, and Lee did a phenomenal job acting like a mindless idiot as he delivered lines while staring off into space, also boasting a ratty, messy wig that was littered with leaves and stems. Goat’s sister Airie is portrayed by Katelyn Baughman, and although her role is small, the performer was hysterical when she smiled, revealing one blacked-out tooth.

Meanwhile, Jenessa Altvater took on the role of Raven, the Harp brothers’ talking bird who initially accompanies the brothers in the show. Altvater wore a black cape-like costume that allowed her to flutter her arms like wings as she crouched down and shouted the warning “Turn back, my bonny!”, and the actress exhibited strength and flexibility when perched high atop the set, twisting her body to mimic the actions of a bird.

As for Rob Littlefield's lighting and projection, they were exquisite, with purple and orange hues accenting the set and a projection of the wooded background featuring a river running through it. The entire production was lighthearted, funny, and very entertaining, and I would say that Timber Lake's presentation of The Robber Bridegroom was one of the company's best I've seen this season.

The Robber Bridegroom runs at the Timber Lake Playhouse (8215 Black Oak Road, Mt. Carroll IL) through August 15, and more information and tickets are available by calling (815)244-2035 and visiting TimberLakePlayhouse.org.