Role Play: “Venus in Fur,” at the QC Theatre Workshop through March 25 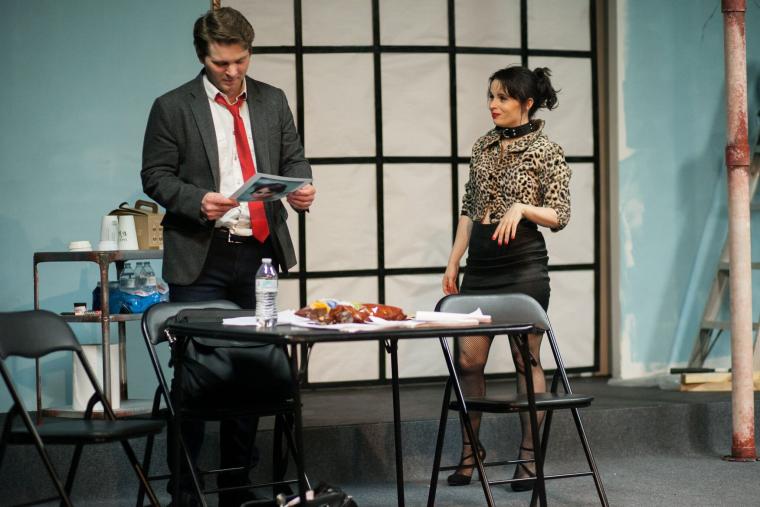 Thomas Alan Taylor and Jessica Taylor in Venus in Fur

Saturday night’s performance of Venus in Fur at the QC Theatre Workshop was … steamy. Not only in terms of the material, but in the talent on-stage, as real-life married couple Thomas Alan Taylor and Jessica Taylor set the stage ablaze in a two-person show about a young actress who all but forces her way into an audition and proves, over the course of 100 minutes, to be far more then she claims to be.

Admittedly, I was excited and a little anxious going into this production, not really having any idea what it was about beyond what I got from the publicity photos … which were also steamy. Without giving too much away, the story starts as playwright/director Thomas Novachek is about to lock up his space after a long audition process for his new play Venus in Fur, a work based on a racy 1870 book of the same name. Before he’s able to get out, though, Thomas is bombarded by the fast-talking, eccentric personality of Vanda Jordan, an aspiring actress just looking to catch a break. He obliges to hear her read for his play's female role, and surprisingly, Vanda is good. Really good. So good, in fact, that she already has the whole script memorized.

Continuing with the audition, Thomas joins Vanda in performing from the script, and what follows is a power struggle and roller-coaster ride through high and low statuses – and between two intertwined narratives – that left my brain spinning. Who is really running this audition? Who, really, is this inexplicable actress? Where do the characters from the script end and the characters playing them begin? No spoilers here. But I will tell you that by the production's finale, it seems as though author David Ives' 2010 script was ahead of its time, and Venus in Fur feels like a very relevant story given the growing headlines about inappropriate behavior by men in the entertainment industry. 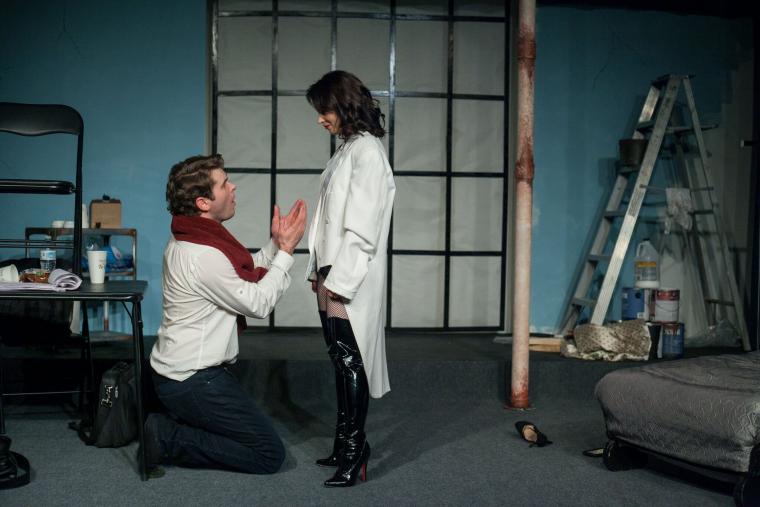 Director Mike Schulz (a Reader employee), throughout the entire performance, masterfully choreographs the show's shifting dynamics and mysterious unknowns. Scenic designer Luke Hansen makes the intimate stage space look like a dingy, beat-up basement of a theatre complete with florescent lighting, which, when turned off and on, adds to the material's jarring feeling of being taken in and out of a script. With such a small space for the actors to move around in, Schulz made every piece of movement appear intentional and not contrived, and everything flowed naturally; I never caught myself wanting the actors to move more or less.

Pairing a real-life husband-and-wife team for this was, I’m sure, a calculated casting decision. And it paid off, as witnessing these two very talented actors and they weaved in and out of the Venus in Fur storylines was a joy. It’s hard to specifically detail each of the Taylors' performances, as both actors were completely connected throughout the show – even, at times playing each other's characters from Thomas’ play-within-the-play. Jessica displayed a great sense of quirkiness, as well as command and authority when her character becomes the show's more dominant figure, and the role highlights a range of accents as well, from New York to Russian. Her off-stage husband, meanwhile, shows impressive control with his great character arc as the playwright/director gradually loses more and more power over the situation, and his best moments are not rushed and very believable. When Thomas (the character) develops a longing for Vanda, Thomas (the actor) shows that longing with his entire body. 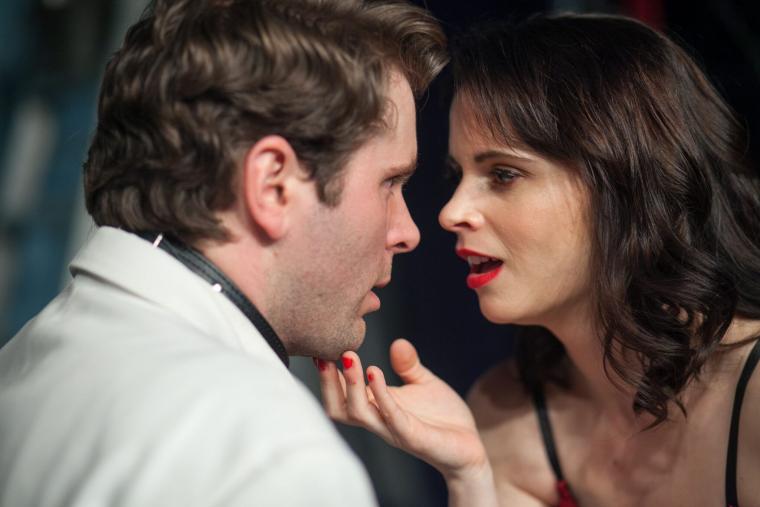 Don’t let the tone of this review fool you, however, as Venus in Fur is actually a very funny show. Ives' writing is clever, witty, and quite hysterical, and there are quickly hilarious throwaway lines – as when Vanda spontaneously decides to change a character name to “Thomas” – that might catch you off guard if you're not paying attention.

Although I fear giving too much away, as so much of the play is built on mystery, Venus in Fur was a fun and intriguing show, especially having never seen it before. And the actors do a magnificent job of keeping the audience guessing until the very end. I guess you’ll have to see it, too, just to see who ends up on top.

Venus in Fur runs at the QC Theatre Workshop (1730 Wilkes Avenue, Davenport) through March 25, and more information and tickets are available by calling (563)823-8893 or visiting QCTheatreWorkshop.org.