Sea Breeze: “The Little Mermaid,” at the Clinton Area Showboat Theatre through July 8 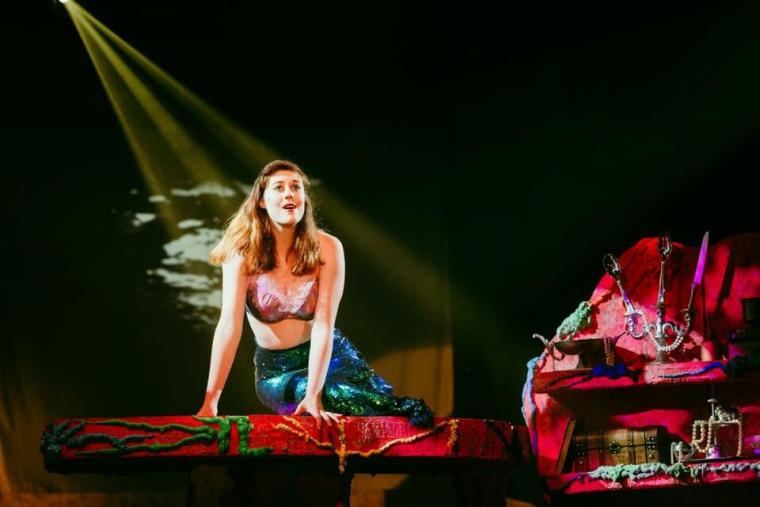 Aria Braswell in The Little Mermaid

It was a sweltering-hot day this past Saturday in the Quad Cities, but it was quite refreshing being under the sea with the cast of Disney’s The Little Mermaid at the Clinton Area Showboat Theatre. As I sat back in my seat enjoying the music, I heard the precious young girl seated behind me sweetly singing along with the teenage mermaid Ariel (Aria Braswell) in a very soft voice. I realized then how powerful and influential this musical fantasy was, and still is, for children everywhere.

With music by Alan Menken and lyrics by Howard Ashman and Glenn Slater, I also found myself escaping into a colorful world filled with beautiful sea creatures, shimmering seaweed, and aqua-blue water that glowed under designer Cameron Hoffman's purple-and-green lighting. As most of you know, Ariel is a rebellious teenage mermaid who wants nothing more than to be in the human world above. Her father King Triton (Dom Pagliaro), however, is certain that all humans are bad given that they hunt sea creatures with spears, and blames the people on the earth for killing Ariel's mother. On one of her visits to the surface, though, Ariel falls in love with the human prince Eric (Hank von Kolnitz) – an act met with great disapproval from her father – and makes a risky deal with the nasty sea witch Ursula (Samantha Bonzi), with the lovely mermaid magically transformed into a human for three days.

With her long auburn curls and delicate complexion coupled with her fantastic voice, Braswell’s entire persona just emanates “Disney princess.” In the opening number, she appears from behind some coral and sings “The World Above” complete with glimmering green mermaid tail compliments of costume designer Scott M. Anderson. Equally talented, and quite dashing, is leading man Kolnitz, who pulls off a very convincing Prince Eric. Kolnitz has an uncanny way of singing softly yet very powerfully, and the two actors were paired up nicely, making for a believable romance. 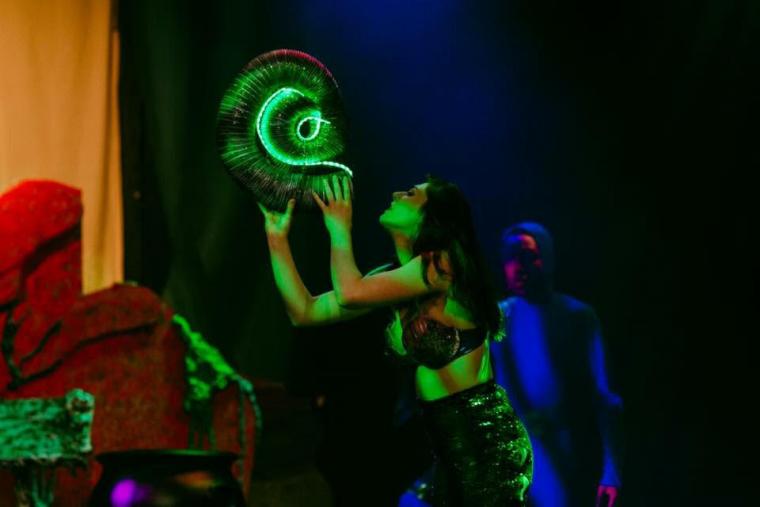 Pagliaro seemed slightly uncomfortable in his costume, which consisted of a tight-fitting merman tail that was exactly like Braswell’s. In my opinion, the tail kind of emasculated the royal character he was playing, and it may have been wiser to put the actor in a slightly different tail that might've made for a more masculine version of what the female mermaids were wearing. Either way, however, Pagliaro’s performance lacked enthusiasm and believability – although I’m guessing the children in the audience couldn't have cared less. As for Bonzi's Ursula, I felt a smidge underwhelmed, as the actress had a decent voice but didn’t deliver the true fury of an evil sea witch.

The charismatic, Caribbean crab Sebastian, though, is a lovable guy, and Gordia Hayes pulled off the role very well. Sebastian always landed on top and even managed to escape the boiling pot of Chef Louis (Nick Berninger) – and talk about a great talent, Berninger was hilarious in his roles as both Louis and Scuttle, a bumbling seagull who is forever mispronouncing words. Not only is Berninger a huge personality on stage, but he also wowed us with a very entertaining tap dance alongside his other seagull friends (Ben Cherington and Grant Reynolds) while they sang the song “Positoovity.” Berninger frequently stole the show with his ability to change his voice in the most interesting and funny of ways, going from a high-pitched shriek to a baritone in a matter of seconds, and the audience erupted in laughter when Chef Louis made his grand entrance in The Little Mermaid's second half. 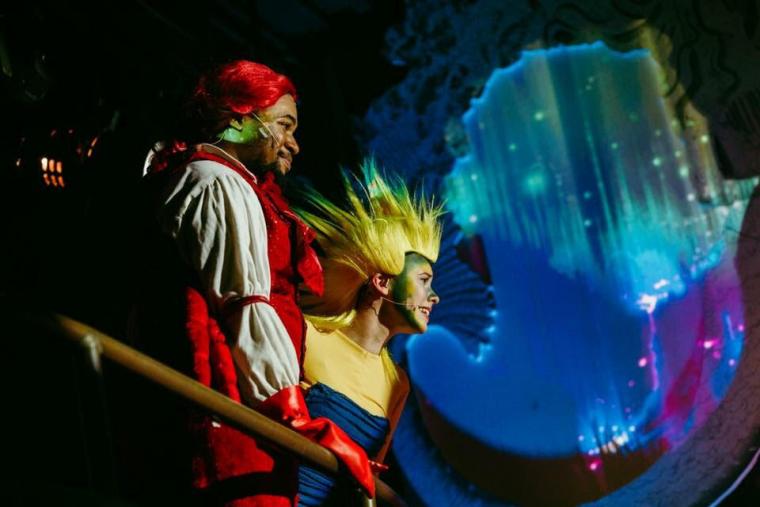 Another notable performance was that of Rosalind Blume in the role of Flounder, a brightly colored yellow-and-blue tropical fish who is Ariel’s best friend. Blume is quite a firecracker on stage, and her overall exuberance is fun to watch. But the entire ensemble created a great interactive experience by roaming around the theatre at different points in the show. The performers who played the eels Flotsam (Jahir Hipps) and Jetsam (Jordan Reeder) did a particularly outstanding job with their imaginative moray-eel puppets, and Hipps and Reeder demonstrated great, creative acting ability with their body movements and voices while portraying Ursula's evil minions.

Overall, I really enjoyed The Little Mermaid, and I know the youngsters among the Showboat's audience thoroughly enjoyed it, as well – the production is entertaining no matter what your age, and caters to the kid in your heart. Bravo to director/choreographer Jacob Brent on a job well done, as well as Laurie Lewis for her fabulous musical direction. I left the theatre feeling a little lighter and a whole lot cooler.

The Little Mermaid runs at the Clinton Area Showboat Theatre (311 Riverview Drive, Clinton) through July 8, and more information and tickets are available by calling (563)242-6760 or visiting ClintonShowboat.org.