Sherlock Gone Wilde: "Sherlock Holmes & the Case of the Jersey Lily," at the Richmond Hill Barn Theatre through October 12 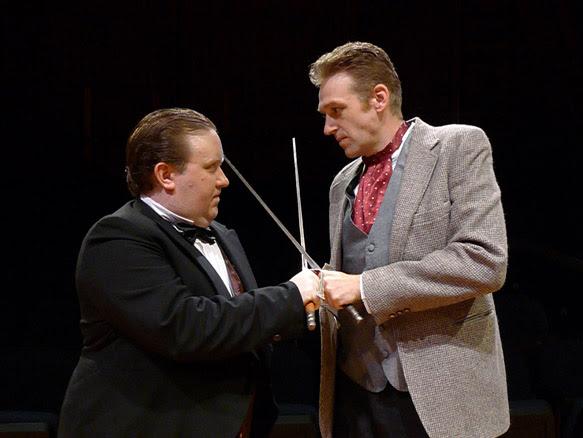 There's a line in the Richmond Hill Barn Theatre's production of Sherlock Holmes & the Case of the Jersey Lily, delivered by Tommy Ratkiewicz's Oscar Wilde (yes, that Oscar Wilde), that goes, “People are either charming or tedious.” His observation is true of director John VanDeWoestyne's staging, too, and particularly of the show's cast members. Thankfully, though, several of the supporting actors bring a charm to the stage that lightens the mood, and makes playwright Katie Forgette’s script more bearable.

As for the tediousness that, unfortunately, applies to this mystery's central character, Jersey Lily follows Sherlock Holmes as he works to figure out who stole the intimate letters of famed actress Lillie Langtry (Molly McLaughlin) in order to blackmail her. To be fair, Dana Moss-Peterson's characterization as Sherlock is loaded with laudable poise, diction, and fully-realized characterization. However, while his acting is commendable, it's also a weakness in this particular production. Moss-Peterson's Sherlock is an intellectual snob, so full of condescension in his interactions that it often seems like he's bullying Larry Lord's genial, humble, utterly lovable Dr. Watson. Sherlock's joylessness flattens any humorous lines he delivers, sucking the fun out of almost every moment he's on stage, and I found it difficult to differentiate Moss-Peterson’s Sherlock from Bryan Woods’ Professor Moriarty. Both are equally arrogant, but while Woods’ evil air was fitting enough to leave me wanting more of his dastardly character, Moss-Peterson’s similar haughtiness is so unlikable that it left me struggling to find a connection to the play. (Seriously, Woods' Moriarty is so deliciously villainous that I would enjoy an entire play centered on him.) 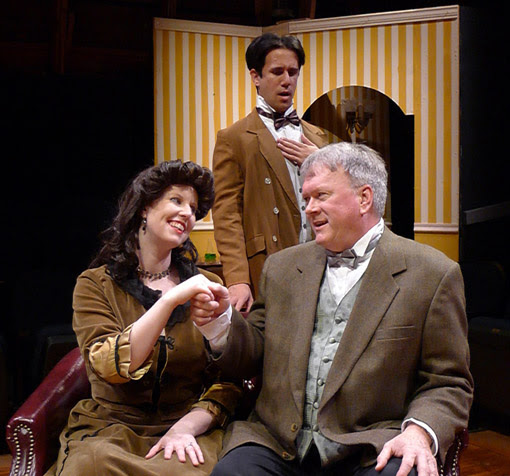 In contrast, Ratkiewicz’s flaming countenance as Oscar Wilde, while arguably overdone, brings with it a buoyancy that lightens the mood, and I couldn't help but grin whenever he was on stage during Friday's performance. Even though Ratkiewicz is oftentimes a caricature, Oscar is an amusing one, and could be credited with singlehandedly saving Richmond Hill's otherwise boring play – that is, if several other actors didn’t also provide similar senses of humor to what’s supposed to be a mystery/comedy.

McLaughlin makes for an admirable Lillie Langstry, the Jersey Lily of the title. Her British accent, though occasionally peppered with a Southern drawl, is spot-on, and her portrayal is among the most sincere I’ve yet seen from the actor. Jackie Patterson, a Richmond Hill favorite of mine, doesn’t disappoint, as she brings a comedic edge to her role as Lillie's personal assistant Mrs. Tory. Patterson, perhaps more than anyone other than Ratkiewicz, understands that this play is also a comedy rather than just a mystery, and consequently provides many of the evening’s biggest laughs. Josh Wielenga is also to be commended, not only for clearly differentiating his portrayal of Abdul Karim (a secretary of the Queen) from his John Smythe (the rapscallion who is Moriarty’s henchman), but also for giving Smythe a delectable likability within his bad-guy persona. 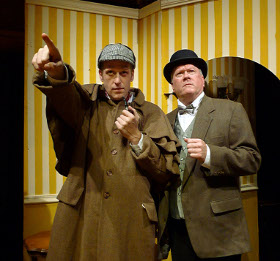 Unfortunately, Forgette’s wordy script, to me, seems an obvious, lazy attempt to blend Oscar Wilde with Sherlock Holmes creator Arthur Conan Doyle. (The Wilde portion basically comes through lines similar to those from his The Importance of Being Earnest, rather than any effort at mimicking the playwright’s voice.) It doesn’t help that VanDeWoestyne doesn’t attempt to emphasize the humor that’s present in Forgette’s writing, instead staging the play as a high drama by an expert wordsmith, even though it’s not. And while I understand the limitations of set design for theatre-in-the-round, I wish VanDeWoestyne chose an option other than covering the furniture used in Sherlock’s flat with black cloth when transitioning to Lillie’s abode, as it looked, on Friday, like Lillie had no design sense.

All is not lost, though, as costume designer Suzanne DeReu decks every cast member in impressive ensembles, with actors making multiple costume changes. Actor Larry Lord’s sound design also includes some of the most impressive incidental music I’ve yet heard in a local play, with scene changes accompanied by what sounded like a fitting film score. Still, even considering Ratkiewicz’s laudable performance, I’m torn as to whether or not I liked Richmond Hill's Sherlock Holmes & the Case of the Jersey Lily. But I have to admit that when, about halfway through the first act, my partner’s 11-year-old daughter whispered into my ear, “I’m sorry, but this kind of bores me,” I replied, “Me, too.”

Sherlock Holmes & the Case of the Dragon Lily runs at the Richmond Hill Barn Theatre (600 Robinson Drive, Geneseo) through October 5, and more information and tickets are available by calling (309)944-2244 or visiting RHPlayers.com.