“Singin' in the Rain,” September 11 through November 2 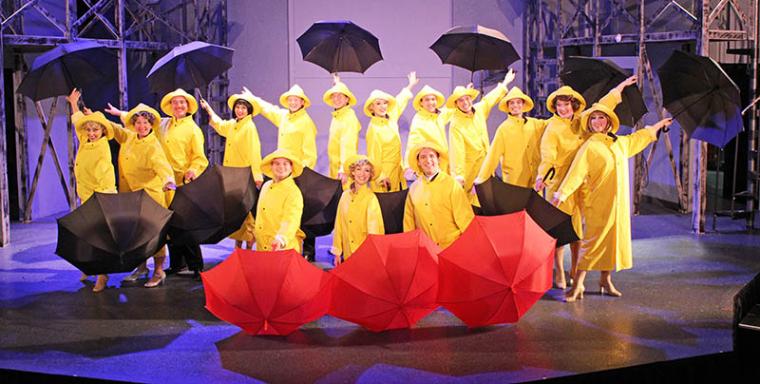 "Singin' in the Rain" at the Circa '21 Dinner Playhouse -- September 11 through November 2.

Lauded by Broadway World as “a fantastic production sure to satisfy old fans and charm new ones,” the theatrical adaptation of one of Hollywood's most revered movie musicals – the timeless Singin' in the Rain – makes its long-awaited return to Rock Island's Circa '21 Dinner Playhouse September 11 through November 2, a Tony Award-nominated stage version that Chicago Theatre Review called “a glitzy, glamorous homage” that “offers up a flood of entertainment.”

Stanley Donen's peerless Singin' in the Rain movie topped the American Film Institute’s 100 Years of Musicals list and, in 2007, was ranked as the fifth-greatest motion picture of all time. Having been adapted for the stage by the legendary theatre team of Betty Comden and Adolph Green, the Singin' in the Rain stage musical “pours down” delight, capturing the waning days of the silent-screen era as they give way to newfangled “talkies.” With The Jazz Singer premiere making Hollywood frantic, the studios are forced to suddenly change all the movie-making rules at once in order to accommodate sound, and in doing so, they leave silent pictures – and some of their stars – behind. When Monumental Studios consequently turns its silent The Dueling Cavalier into the musical The Dancing Cavalier in order to stay relevant, it's faced with a problem: The movie's star Lina Lamont can’t sing, and in truth, can barely talk, as her voice sounds something akin to nails on a chalkboard.

Enter Kathy Selden, an aspiring actress whose dulcet tones are able to cover Lina Lamont’s, calling into question what it means to act, how credit is distributed, and how one gets a truly fair shake in the movie business. Filled with romance, nostalgia, and even on on-stage rainstorm, this delightful treat for all ages features some of the best-loved comedy routines, dance numbers, and love songs ever written, including “Good Mornin’,” “Make ‘em Laugh,” and, of course, hoofer Tom Lockhart's show-stopping dance number “Singin’ in the Rain.”

In addition to its 7:45 p.m. public previews on September 11 and 12, Singin' in the Rain runs September 13 through November 2, with performances on Fridays, Saturdays, and Wednesdays at 7:45 p.m.; Sundays at 5:45 p.m.; and Wednesday afternoons at 1:30 p.m. All shows will be preceded by meals and pre-show entertainment by the theatre's performing wait staff of Circa '21 Bootleggers, and more information and tickets are available by calling (309)786-7733 extension 2 or visiting Circa21.com.