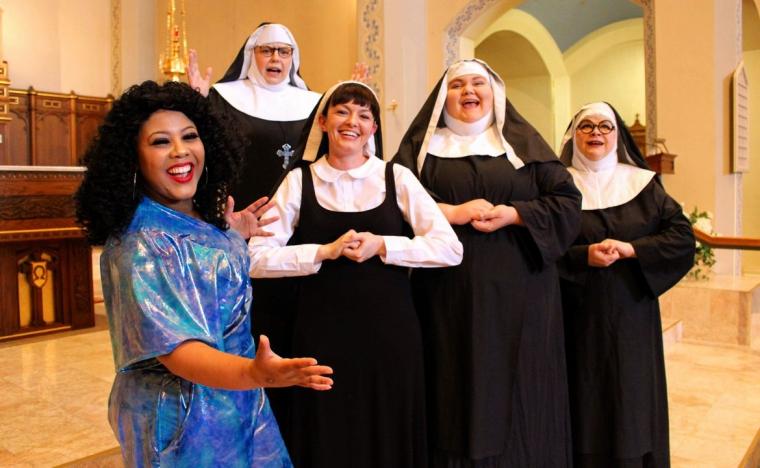 Nominated for five 2011 Tony Awards including Best Musical, and based on the beloved film comedy starring Whoopi Goldberg, the tuneful and riotous Sister Act wraps up Quad City Music Guild's 2019 summer season, the show's August 9 through 18 run demonstrating why the Associated Press deemed it “frothy, giggly, and yet often poignant,” as well as “a musical that hits all the right spots, achieving something close to Broadway grace.”

With its music by multiple Oscar and Tony winner Alan Menken, Sister Act finds Deloris Van Cartier an aspiring disco diva in Philadelphia, where she is auditioning to perform at the nightclub of her gangster boyfriend Curtis. After Curtis tells her that she's not ready for “the big time,” Deloris decides to break up with him – but when she goes to find him, she accidentally witnesses the man killing one of his cronies. Deloris consequently runs to the police, who place her in hiding at a convent until Curtis is brought to trial. At first, Deloris, disguised as a nun, chafes against the constraints of convent life and its immovable Reverend Mother. But after she's introduced to the struggling choir at the convent, everything changes. She finds that many of the nuns at the convent are not that different from her and actually quite fun to be around, and as they help Deloris discover her true purpose, the sisters show her a genuine love and affection that was missing in her life. Filled with powerful gospel music, outrageous dancing, and a truly moving story, Sister Act is a sparkling tribute to the universal power of friendship, with the New York Daily News calling it “a feel-good crowd-pleaser worth celebrating.”

Sister Act runs at Moline's Prospect Park Auditorium August 9 through 18 with performances at 7:30 p.m. on Fridays and Saturdays and 2 p.m. on Sundays. Admission is $11-16, and more information and tickets are available by calling (309)762-6610 or visiting QCMusicGuild.com.