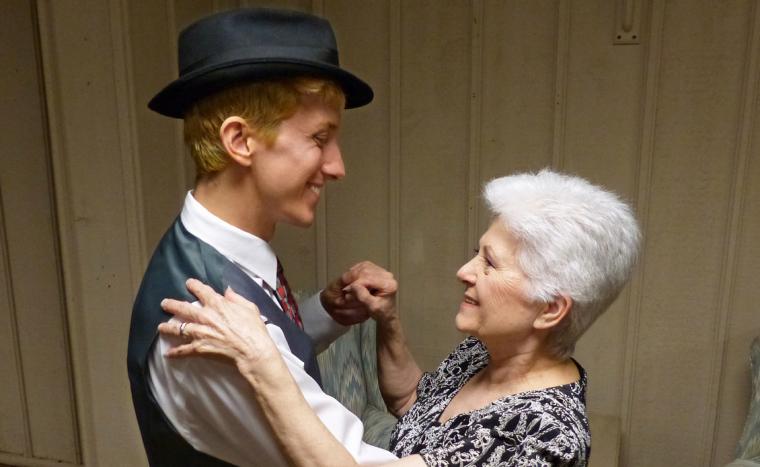 Adam Cerny and Stephanie Naab in "Six Dance Lessons in Six Weeks" at the Playcrafters Barn Theatre -- October 1 through 10.

Lauded by Theatre in L.A. as “a touching and human comedy” about characters who “discover an unlikely but profound connection,” playwright Richard Alfieri's Six Dance Lessons in Six Weeks enjoys an October 1 through 10 run at Moline's Playcrafters Barn Theatre, the two-person show praised by the Los Angeles Times as a “crowd-pleasing combination of sass and sentiment.”

In Alfieri's 2001 work, Lily, an aging but formidable retiree, hires Michael, an acerbic dance instructor, to give her dance lessons at her condominium in St. Petersburg Beach, Florida. The initial antagonism between a gay man and the wife of a Southern Baptist minister eventually gives way to profound compatibility as the pair swing dances, tangos, foxtrots, and cha-chas while sharing barbs and intimacies along with the dance steps. By the final lesson, Lily shares with Michael her most closely guarded secret, and he shares with her his greatest gifts: loyalty and compassion. A poignant comedy with music and dance, Six Dance Lessons in Six Weeks also address the serious issues of ageism and intolerance, and since its Los Angeles premiere and Broadway opening, Alfieri's tender comedy has been translated into 14 languages, has been performed in 24 countries, and inspired a 2014 film starring Gena Rowlands and Cheyenne Jackson. 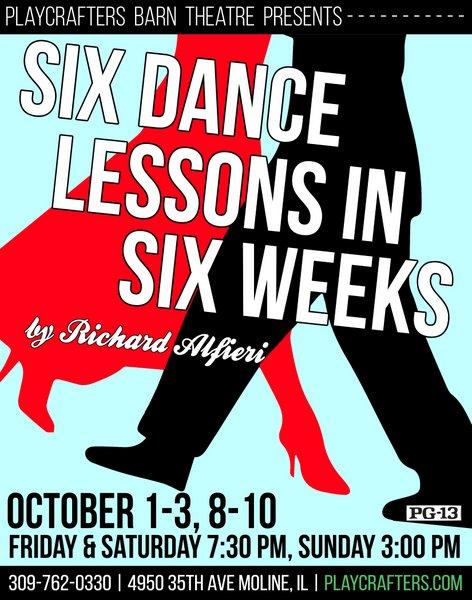 Directing Six Dance Lessons in Six Weeks for Playcrafters is Jennifer Kingry, a frequent area-theatre director, designer, and performer whose previous offerings for the Moline venue have included 4,000 Miles, Sylvia, and the Neil Simon musical Promises, Promises. Lily is portrayed by Stephanie Naab, previously seen in such Playcrafters presentations as The Game's Afoot and Enchanted April, and Lily's dance instructor Michael is played by Adam Cerny, whose numerous engagements for the theatre have included roles in The Woman in Black and Prescription: Murder. Kingry also serves as Six Dance Lessons in Six Weeks' lighting and sound designer, and the rest of her show's production includes Elizabeth Melville as stage manager, Eric Landuyt as producer, Phil Cathoir is set builder, Marcia Templeman as property master, Katie Newport as poster designer, and Tom Naab as choreographer.

Six Dance Lessons in Six Weeks runs at the Playcrafters Barn Theatre October 1 through 10, with performances Fridays and Saturdays at 7:30 p.m. and Sundays at 3 p.m. Admission is $13-15, and more information and tickets are available by calling (309)762-0330 and visiting Playcrafters.com.