“Something Intangible,” July 12 through 21 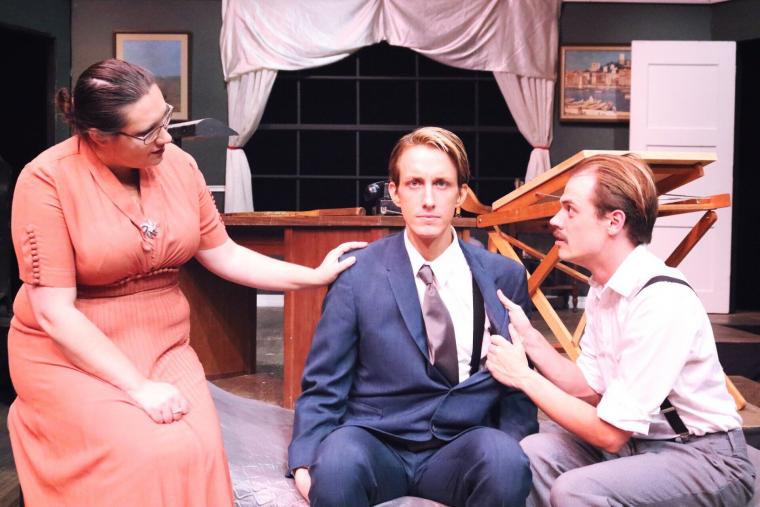 Kayla McKay, Adam Cerny, and Anthony Natarelli in "Something Intangible" at the Playcrafters Barn Theatre -- July 12 through 21.

With Talkin' Broadway calling it “a lighthearted look at the struggle between art and commerce” as well as “a play that you can't help but love,” the Hollywood period comedy Something Intangible serves as the latest production at Moline's Playcrafters Barn Theatre, with the show's July 12 through 21 run sure to prove why the Philadelphia City Paper deemed it an “:insightful exploration of artists and the people who love – and suffer – them.”

Its inspiration based on the early Hollywood careers of Walt Disney and his brother Roy, playwright Bruce Graham's Something Intangible is set in 1941 at the movie studio run by Wiston brothers Tony and Dale – a studio most famous for its beloved cartoon dog, Petey Pup. Gifted Tony longs to move beyond Petey and create a feature-length animated film set to classical music. His loyal brother Dale, meanwhile, manages everything – including unrealistic budgets, unpredictable Tony, and unrelenting deadlines – while trying not to lose himself or his family in the wake of Tony's feverish genius. Humming with humor and brimming with humanity, Something Intangible finds Dale and Tony showing us, and one another, the remarkable ways in which brothers offer support, sometimes in spite of it all.

Directing Something Intangible for Playcrafters is venue veteran Mike Turczynski, who recently helmed the theatre's musical smash Avenue Q alongside co-director Callen Brown and has appeared as an actor in the company's productions of Clybourne Park and Stupid F---ing Bird. Tony and Dale Wilson are portrayed, respectively, by familiar Playcrafters performs Anthony Natarelli (Avenue Q, Stupid F---ing Bird) and Adam Cerny (The Woman in Black, Some Girl[s]). And rounding out Turczynski's cast are a trio of area talents with Playcrafters credits of their own: Bruce Duling (Stupid F---ing Bird), Kayla McKay (Rumors), and Eric Teeter (The Crucible).

Something Intangible runs July 12 through 21 at the Playcrafters Barn Theatre, with performances at 7:30 p.m. on Fridays and Saturdays and 3 p.m. on Sundays. Admission is $7-13, and more information and tickets are available by calling (309)762-0330 or visiting Playcrafters.com.