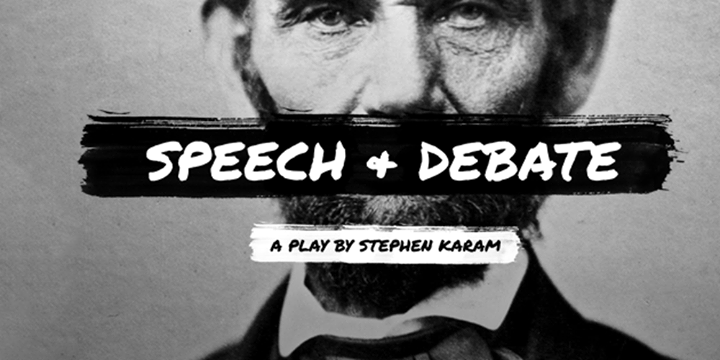 "Speech & Debate" at the Playcrafters Barn Theatre -- September 27 through 29.

A widely acclaimed work in which, according to Variety magazine, “conflicts explode in consistently intriguing ways,” the comedic drama Speech & Debate serves as the final production in the Playcrafters Barn Theatre's 2018 Barn Owl Series, its September 27 through 29 run demonstrating why the Washington Post deemed it a “suspenseful tale that fuses keen-eyed civic critique with riotous and even campy humor.”

When, in Speech & Debate, the Republican mayor of Salem, Oregon, is caught in a sex scandal involving underage boys and the Internet, local high-school student Solomon sits up and takes notice. Intelligent and aggressive, this nerdy, single-minded teen with journalistic ambitions wants to investigate homophobic closeted men in positions of power in the state capitol, whether or not they're politicians. Meanwhile, Howie, a gay high-school transfer student, is disgusted by the Puritan culture of Salem, in which he can't get a Gay-Straight Alliance sponsored at school but can get picked up by a teacher in a chat room. And dramatic, determined Diwata, a young diva with adult burdens and a grudge against the drama teacher who refuses to cast her, is the nervous witness to an illicit student/teacher encounter. When these three students realize they each have a piece of the same scandalous puzzle, purposes are double- and triple-crossed, conversations explode, secrets are bartered, and ultimately, and in spite of themselves, an alliance is formed.

Written by Stephen Karam, who won a Best Play Tony Award for The Humans, Speech & Debate is a hilarious and emotional story of misfit teens who explore sexuality, identity, and personal power as they learn to deal with misunderstanding and dismissal from the adult world. Playcrafters' production is being directed by Max Moline, whose area-theatre credits include roles in the QC Theatre Workshop's Peter & the Starcatcher and St. Ambrose University's The Complete Works of William Shakespeare (abridged), and features three fellow SAU alumni in its cast: Helene Devine (The Cat in the Hat, Junie B. in Jingle Bells, Batman Smells), Jordan McGinnis (The Tempest, The Importance of Being Earnest), and Jordan Webster-Moore (Glengarry Glen Ross, Hedda Gabler).

Speech & Debate's September 27 through 29 run finds performances starting at 7:30 p.m., admission is $5-8, and more information and tickets are available by calling (309)762-0330 or visiting Playcrafters.com.