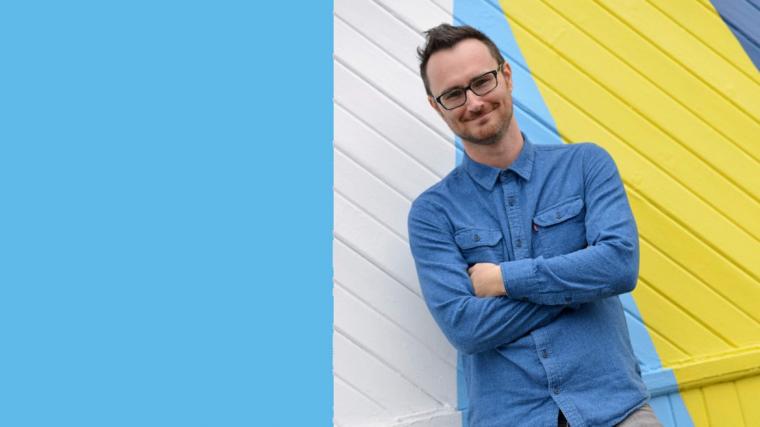 Deemed “extraordinary” by the London Times and “seriously funny” by the Charleston City Paper, David Lee Nelson's one-man-show Stages will be available for March 5 through 21 viewing in a virtual presentation by Iowa City's Riverside Theatre, the late writer/star's final offering a work that, the Charleston City Paper continues, “gives the audience a glimpse of a man wrestling with his fate, coming to grips with a death sentence, and yet accepting it with humbling joviality.”

In 2017, award-winning solo performer Nelson, at the age of 38, received news that would change his life: He was diagnosed with Stage Four Colon Cancer. Nelson consequently kept a blog of his time in chemotherapy – a heartbreakingly funny chronicle of a disease that affects over nine million Americans. This material became the basis for his solo play Stages, first performed in 2020 and created with Riverside Theatre’s Producing Artistic Director Adam Knight. Nelson's solo piece is not simply a play about sickness; it’s a story of life’s setbacks and surprises, and about searching for hope in the most unlikely of places. Filmed at the Gilbert Street Theatre in March 2020 and presented virtually in partnership with the Iowa Cancer Consortium and Holden Comprehensive Cancer Center, Stages is a vital, heartrending, and hilarious work, one that led The Gazette to state, “You may need a tissue, but you will leave uplifted.”

Last September, Nelson passed away from complications caused by his cancer, but the artist had an intensely prolific theatrical life prior to 2020. He was also the author of the solo pieces The Elephant in My Closet, Status Update, and Silence of Lucky, with Nelson's other plays including A Sudden Spontaneous Event, Folly Beach, Free to a Good Home, and Mary & Joseph at the Hampton Inn. The recipient of a BA from the College of Charleston and an MFA from the Alabama Shakespeare Festival, Nelson's regional and New York acting credits included roles in Shakespeare's Hamlet, The Tempest, The Merry Wives of Windsor, and Much Ado About Nothing, and other credits include Arms & the Man, Stupid F---ing Bird, and AMC's Turn. Stages's virtual presentation was directed by Adam Knight, with its crew also composed of Chris Rich (scenic design), Lauren Duffie (lighting design), and Miles Boinest (original sound design).