A Tale Told by an Eliot: "Murder in the Cathedral," at Area Churches through March 25 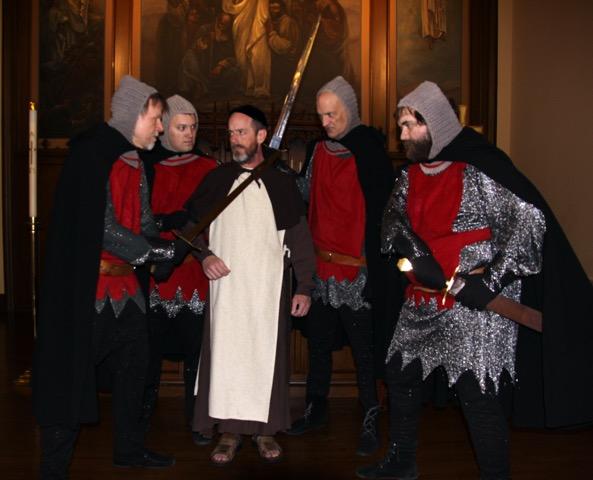 I went to church on Friday night, March 10, and the “house” was packed. We were at Davenport's Trinity Episcopal Cathedral to participate in a ceremony – the ceremony of theatre as constructed in T.S. Eliot’s Murder in the Cathedral, presented by the Genesius Guild under the direction of Don Wooten. The play enacts the martyrdom of Thomas Becket, a man who had been installed as archbishop by former friend King Henry II in order to consolidate the power of the crown, but who now, after becoming head of the church, is a man of conscience who refuses to bow to kingly power.

A central theme of Eliot's drama is that of the wheel symbolizing the flux of time, wherein “acting is suffering and suffering is action”; the still, unmoving center of the wheel is eternity, which is beyond time, and cannot be influenced by human action or suffering. Dense with poetic images and profound ideas such as these, Murder in the Cathedral – a work perhaps better read than staged – concerns Becket’s knowledge of, and preparation for, his martyrdom to come.

The year is 1170, and the play opens with the Women of Canterbury chorus speaking of how they've been “living and partly living.” Eliot’s choral poetry is magnificent, and was, for me, the most impressive part of Friday's presentation. Chorus members Kathy Calder, Rae Mary, Sue Staley, Melita Tunnicliff, and Kathryn Wherry do justice to Eliot’s words, ringing true in enunciation, clarity, and just the right touch of emotion, and there were particular moments in which fellow chorus member Kyah Johnson’s piercing words really touched my heart.

Three priests (Koami Kunakey, Don Wooten, and James Loula) are also discussing the situation when the Herald (Tyler Henning) enters to say that Becket (Michael King) has returned from self-exile in France, and once he's back at Canterbury, he must face four tempters. The first three (Phillip Tunnicliff, Gregory Braid, and Doug Adkins) represent temptations he has already overcome: a life of pleasure, friendship with the king, and partnership with the barons against the king. However, the fourth (Luke Currie) presents the last and perhaps most difficult temptation: Becket’s martyrdom for the sake of his own glorification – “doing the right deed for the wrong reason.” This scene with King and Currie is, I think, the strongest in the play, and King’s presentation of Becket’s inner conflict is compelling and believable.

Becket overcomes the temptation for self-glorification, but rather than showing this, Eliot more or less tells us that Becket has become a changed man. With this transformation taking place in Murder's first half, the plot now has nowhere to go, structurally speaking. Although Eliot has created a play that not only incorporates the elements of Greek tragedy but attempts to recreate a sense of medieval theatre, it's evident that Eliot is more interested in ritual than revealing the story as a playwright. Meanwhile, the notion of the play's structure mirroring that of a Mass is reinforced by Eliot’s insertion of Becket’s Christmas Day sermon, and although written for Becket, Wooten opted to read the sermon himself from the pulpit. This was unorthodox, yet no matter what occasioned it, I wasn't distracted by the choice. Instead, I found that it somehow brought Becket’s words and message into the moment, creating an intertwining between past and present – knitting us, the play's “congregation,” into a fabric with the congregation that heard Becket’s original words.

King Henry II was said to have uttered, “Will no one rid me of this meddlesome priest?”, and four barons who overheard him took those words as a signal that the King wanted Becket dead. Consequently, following the sermon, four knights (Henning, Braid, Adkins, and Don Faust) enter and begin a verbal confrontation with Becket. And although written to take place on-stage, Wooten has Becket’s subsequent murder take place behind the scenes, after the knights have ordered him off.

This leads to a very odd exchange in which the knights return to address the audience directly and justify what they've done. Faust elicits laughs as he introduces his fellow knights, who speak informally while presenting arguments that can’t be taken very seriously. Yet this is such an odd change in tone. Why was this done? To shock us into facing our own modern sensibilities that may question the validity of a martyr’s death?

Although there were a few dropped lines and occasional awkward silences, the actors performed with overall confidence and skill, and the experience itself was unique, worthwhile, and, as attested by the sustained applause, very well-received. Murder in the Cathedral is greatly worth seeing – and reading, too.