Teach Us How to Shimmy: The Clinton Area Showboat Theatre's “Smokey Joe’s Café,” at the Riverview Park Bandshell through June 27 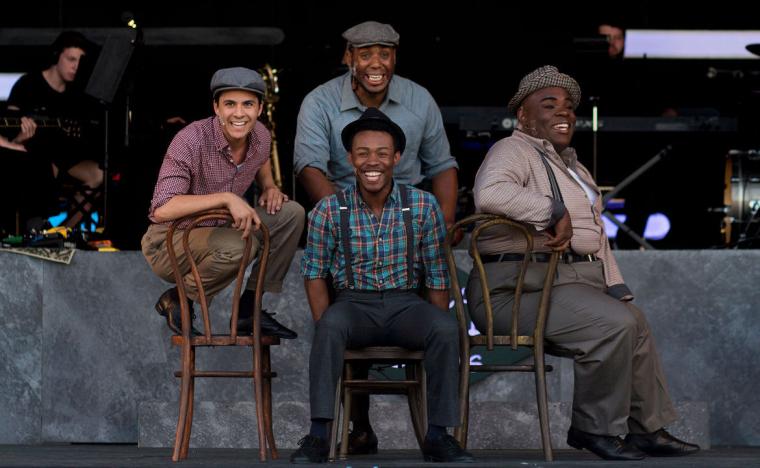 It was a beautiful summer night on Saturday, and I was thrilled to attend the Clinton Area Showboat Theatre’s energetic new musical Smokey Joe’s Café. Celebrating the songs of Jerry Leiber and Mike Stoller, this production took place outdoors, across the street from the Showboat in the charming Riverview Park Bandshell. And from the first note of the first song, I knew I was in for a treat.

Directed and choreographed by Jon Martinez, and with music direction by Kory Danielson and Harrison Roth, the show's company of singers started off with great harmonies and a smooth silky sound in the opening number “Neighborhood.” Next up, four incredibly talented young men: Melvin Gray, Jr., Je’Shaun Jackson, Mateus Cardoso, and Robert McFletcher-Jones, who performed a wonderful rendition of “Young Blood.” Throughout Smokey Joe’s Café, each singer offered his own unique flair and personality to every song they performed together, reminding me of a well-oiled machine that was both perfectly blended and polished. Gray, Jr. was also an excellent dancer, Jackson delivered lyrics in a way that was soulful and sweet, Cardoso is the total package, and McFletcher-Jones had a deep bass voice that was awesome.

Backed up by the equally talented band Elmo Glick & the Sparks, the entire ensemble delivered memorable tunes such as “Stand by Me,” “On Broadway,” and “Love Potion #9.” The musicians were fantastic, with Kory Danielson conducting and on piano, Harrison Roth on keyboard/synthesizer, Don Salting on guitar, Jakob Lamphere on bass, Hannah Harder on saxophone, and Nolan Mancl on drums. The only downside to being outside was there were some other sounds to compete with, such as the traffic and the next-door baseball diamond, but sound engineer Dylan Dutro did a great job turning up the volume as to mostly drown out the peripheral noise. 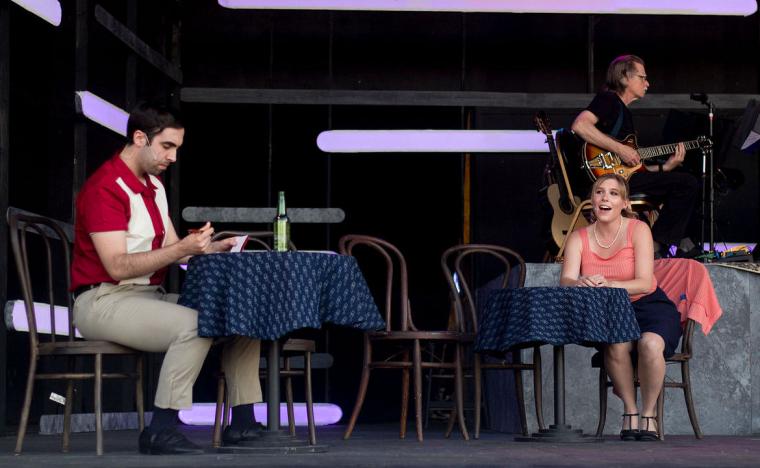 Producing artistic director James Beaudry and executive director James Kyle Davis should be extremely proud of this production, as it is one of the best I have seen in the area. Smokey's lighting by Davis and assistant designer Samuel Verdino was exquisite, with long beams of lights surrounding the stage that changed colors from different shades of pastels to simple glowing warm white lights. The whole stage background was black, so the lights really stood out, emanating a cozy glow throughout the night and especially as the sun began to set. There was also a great Smokey Joe’s Café neon sign that changed colors throughout the evening.

Getting back to this fantastic cast, Grant Alexander Brown is another phenomenal singer and dancer who really shined in more than one number, but I particularly enjoyed his performance with fellow cast members in the song, “Teach Me How to Shimmy.” Meanwhile, Savannah Cooper’s musicality was rich and beautiful, and I loved her interpretation of “Don Juan.” She was convincing and sassy as she sang, “Don Juan, your money is gone, and when your money is gone, Don, your babe is gone.”

Kris Lyons left it all on-stage and belted out her songs like nobody’s business. She was good in everything, but really excelled in the last song before intermission, when she and the rest of the company took us all to church in the toe-tapping ditty “Saved.” Not to be outdone, Kaela Dawn Massey brought the house down with her solo performance of “Pearl’s a Singer.” And rounding out this topnotch cast was Ava Schmidt, who was exceptionally sweet in her solo rendition of “Falling.” 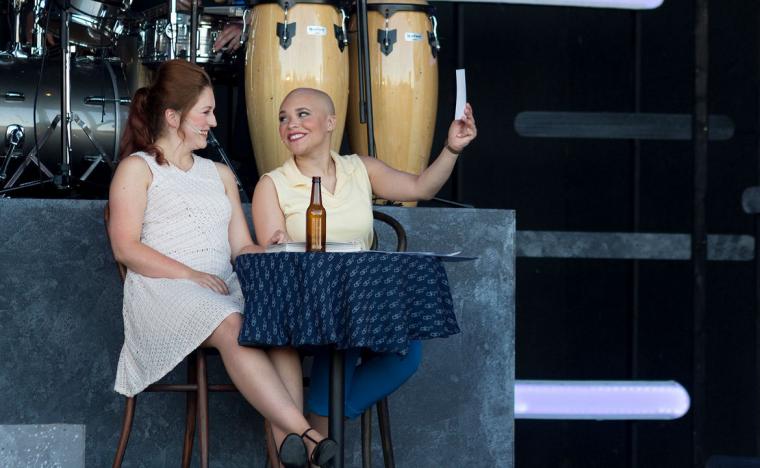 The entire show was fast-paced, and the cast transitioned seamlessly from one song to the next. The choreography by Martinez was also excellent, and I particularly enjoyed the routine he came up with for “On Broadway.” Jackson, Cardoso, Gray, Jr., and McFletcher-Jones were all decked out in white jackets with colored handkerchiefs in each pocket, their wardrobe courtesy of costume designer Montana Carlson and supervisor Rebecca Rankin. The costuming was simple and effective, with basic color schemes paired with scarfs on the women and suspenders and hats for the men.

Tetta Askeland's scenic design consisted of round tables covered with a black material and white circles drawn on them that were cleverly turned over to resemble train wheels in the “Keep On Rollin'” sequence. There was also a quaint bar with stools situated stage left, and the band was positioned behind the singers and elevated, making for a nice sound blend and view.

I could not contain my enthusiasm throughout the night, and even found myself letting out a holler every now and then, just because of how great Saturday's production was. I thoroughly enjoyed myself, and was impressed with the level of talent that it took to pull off a fabulous night in the Clinton Area Showboat Theatre’s superb presentation of Smokey Joe’s Café.