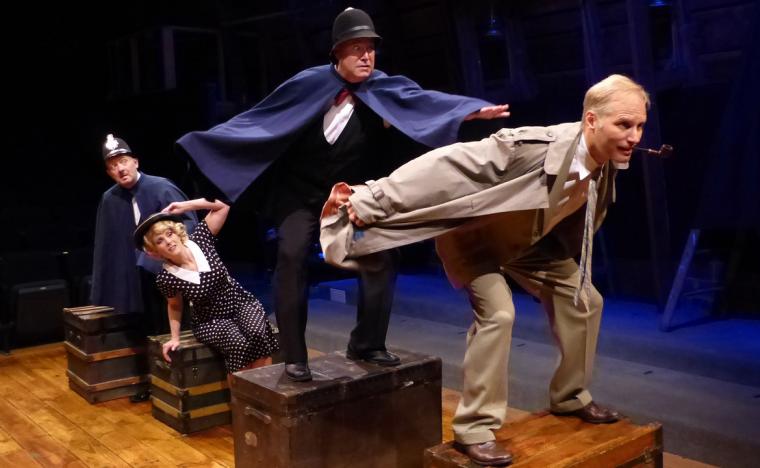 Kevin Babbitt, Jessica White, Mike Kelly, and Jonathan Grafft in "The 39 Steps" at the Richmond Hill Barn Theatre -- August 15 through 25.

Based on John Buchan's 1915 novel that was adapted into Hitchcock's 1935 film classic, The 39 Steps opens with mild-mannered Richard Hannay at a London theatre when a fight breaks out and a shot is fired. In the ensuing panic, he finds himself holding a frightened Annabella Schmidt, who talks him into taking her back to his flat. There, she tells him that she is a spy being chased by assassins out to kill her. She also claims to have uncovered a plot to steal vital British military secrets, implemented by a man who is the head of the espionage organization “The 39 Steps.” The next day, however, Hannay wakes up to find the woman dead, and what follows, in Barlow's imagining, is pure slapstick hilarity in which the entirety of Hitchcock's movie is performed by a cast of four. Boasting on-stage plane crash, handcuffs, missing fingers, and good-old-fashioned romance, The 39 Steps' serious spy story is played mainly for laughs in Barlow's theatrical adaptation, with his script full of allusions to (and puns on the titles of) other Alfred Hitchcock films including Strangers on a Train, Rear Window, Psycho, Vertigo, and North by Northwest.

Directing The 39 Steps' Geneseo presentation is Richmond Hill Players veteran Jennifer Kingry, whose previous directorial offerings for the Barn Theatre include Marvin's Room, Vanya & Sonia & Masha & Spike, and last fall's commedie del'arte slapstick Scapin. Protagonist Richard Hannay is portrayed by Jonathan Grafft, familiar from such Richmond Hill productions as Escanaba in da Moonlight, Flowers for Algernon, and The Boys Next Door, with Annabella Schmidt (and two additional roles) played by Jessica White, another venue favorite with credits including Wrong for Each Other, Rabbit Hole, and Proof. And between them, Michael Kelly and Kevin Babbitt enact dozens of additional men, women, children, and occasional inanimate objects; Kelly's recent stage credits include Escanaba in da Moonlight and The Boys Next Door, while Babbitt enjoyed leading roles in the Playcrafters Barn Theatre's On Golden Pond and Tuesdays with Morrie.

The 39 Steps runs at the Richmond Hill Barn Theatre August 15 through 25, with performances at 7:30 p.m. on Thursdays through Saturdays and 3 p.m. on Sundays. Tickets are $12, and more information and reservations are available by calling (309)944-2244 or visiting RHPlayers.com.