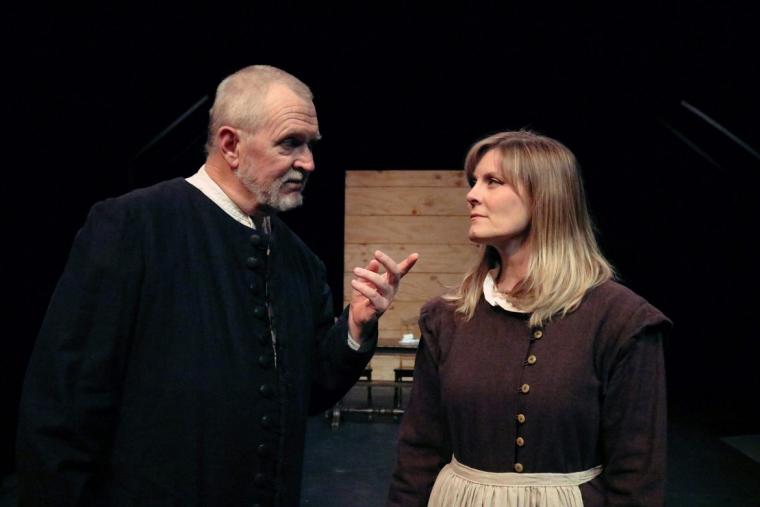 Michael Carron and Jessica White in “The Crucible" at the Playcrafters Barn Theatre -- March 8 through 17.

One of America's most powerful and iconic works by one of the world's preeminent playwrights, Arthur Miller's Tony-winning drama The Crucible will enjoy a March 8 through 17 staging at Moline's Playcrafters Barn Theatre, with the New York Times stating that Miller's wrenching, timeless tale “insists that we identify with not only the victims of persecution but also with those who would judge them.”

Since its premiere in 1953, The Crucible – a masterful and chilling portrayal of the historic Salem Witch Trials and an allegory for the rise of McCarthyism in the late 1940s – has rightfully become an American classic serving as both a cautionary tale and provocation that compels each generation to reflect upon the harrowing world it portrays. In Miller's 1953 Tony Award winner for Best Play, the people of Salem are whipped into a bloodthirsty frenzy by a series of escalating misinterpretations after a group of teenage girls are accused of dancing devilishly in the woods. Fearing retribution, the girls begin a chain of finger-pointing until neighbor turns against neighbor, whispers become testimony, fabrications become facts, and the once powerless teenage girl Abigail Brown suddenly has the ability to decide the fate of all those around her. As the hearts of the townsfolk become poisoned, even John Proctor, a principled farmer and family man, must wrestle with a corrupt court and his own transgressions to protect his good name, as well as that of his damaged yet devoted wife Elizabeth.

The Crucible runs March 8 through 17 at the Playcrafters Barn Theatre, with performances at 7:30 p.m. on Fridays and Saturdays and 3 p.m. on Sundays. Admission is $7-13, and more information and tickets are available by calling (309)762-0330 or visiting Playcrafters.com.