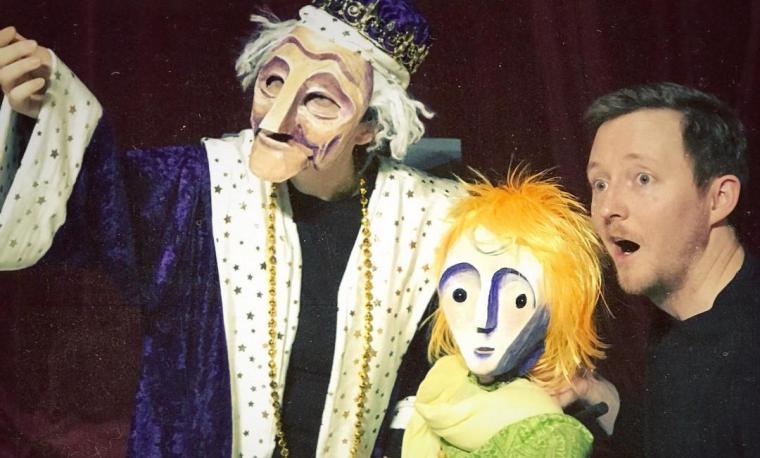 Amelia Fischer and Daniel Rairdin-Hale in "The Little Prince" at the QC Theatre Workshop -- May 3 through May 19.

First published in 1943, Saint-Exupéry's The Little Prince is the story of a pilot whose plane crashes in the Sahara desert, leaving him desperate to find a way home. During his trek, however, he inexplicably encounters a little boy who claims to be a prince exploring the cosmos and traveling from one world to the next. The pilot consequently comes to realize that there is perhaps much he can learn from this strange little boy, and what follows in The Little Prince resulted in one of world literature's most well-loved and universally popular works. Since its publication, Saint-Exupéry's masterpiece has been translated into more than 300 languages and dialects and has sold nearly two million copies annually, and with its current sales of more than 140 copies worldwide, it is one of the best-selling books ever published.

In addition to writing the adult-oriented dramas A Green River and Broken, QC Theatre Workshop Artistic Director Randolph has scripted a number of student-performed comedies for Davenport Junior Theatre, among them stage adaptations of The Emperor's New Clothes and 20,000 Leagues Under the Sea. Randolph also serves as The Little Prince's director, portrays the story's pilot, and is composing original music for the production, with Zach Lawson serving as stage manager, Aaron Hook as lighting and scenic designer, and the show's three-person cast completed by St. Ambrose University theatre professor Daniel Rairdin-Hale and Workshop veteran Amelia Fischer (Almost, Maine), the latter playing nine different characters. The Little Prince himself is enacted by a puppet manned by Rairdin-Hale, and the debuting presentation also features puppet versions of the story's Snake, Fox, and Flower created by Rairdin-Hale and Hook.

The Little Price will be staged May 3 through 19 with performances at 7:30 p.m. on Fridays and Saturdays and 3 p.m. on Saturdays and Sundays. Admission is “Pay What It's Worth” ticket pricing, and more information and reservations are available by calling (563)823-8893 or visiting QCTheatreWorkshop.org.