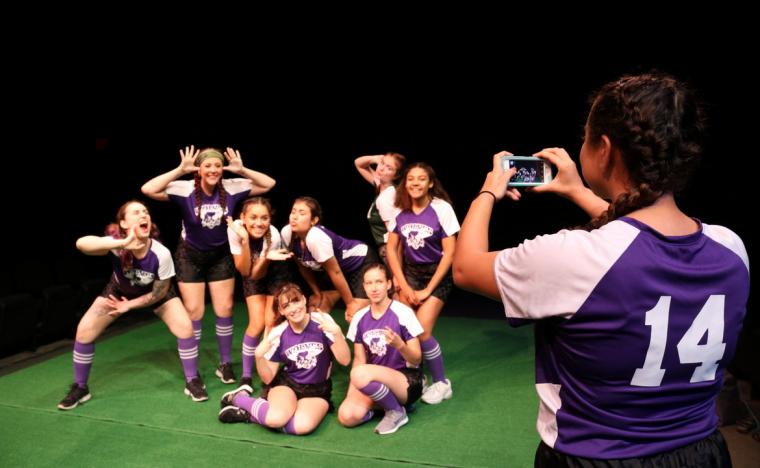 Described by The Village Voice as “a delightful meditation on society, sex, and soccer” and by The Hollywood Reporter as “a dizzying whirl of attitude, anxiety, and adolescent hormonal volatility,” The Wolves makes its area debut at Moline's Playcrafters Barn Theatre September 13 through 22, this funny and moving 2016 work inspiring the New York Times to rave “The scary, exhilarating brightness of raw adolescence emanates from every scene of this uncannily assured first play by Sarah DeLappe.”

Left quad, right quad, lunge – a girls' indoor soccer team warms up in The Wolves, and from the safety of their suburban stretch circle, the team navigates big questions and wages tiny battles with all the vim and vigor of a pack of adolescent warriors. A portrait of life, liberty, and the pursuit of happiness for nine American girls who just want to score some goals, DeLappe's first professionally produced work was a finalist for the 2017 Pulitzer Prize for Drama, with the award's committee calling it “a timely play about a girls’ high school soccer team that illuminates with the unmistakable ping of reality the way young selves are formed when innate character clashes with external challenges." The Wolves was also a finalist for the Susan Smith Blackburn Prize awarded to female playwrights and scored plaudits from critics nationwide, with The Hollywood Reporter saying, “This is one of the most striking playwriting debuts in recent memory, and absolutely not to be missed.”

Directing The Wolves for Playcrafters is venue veteran Cynthia Safford, whose other recent productions for the theatre have included And Then There Were None and The Laramie Project. Three performers also familiar from Playcrafters presentations – Madison Duling [Avenue Q], Alice Guzman [Some Girl(s)], and Jo Vasquez [(a work in progress)] – appear in The Wolves alongside Valentine Chenus, a castmate in Countryside Community Theatre's summer production of Mamma Mia! And joining them are six performers all making their Playcrafters debuts: Arissa Constantino, Delaney Gahagen, Inna Gomez, Lidia Gomez, Amaris Olivia-VanDeWalle, and Celeaciya Olvera.

The Wolves runs September 13 through 22 at the Playcrafters Barn Theatre, with performances at 7:30 p.m. on Fridays and Saturdays and 3 p.m. on Sundays. Admission is $7-13, and more information and tickets are available by calling (309)762-0330 or visiting Playcrafters.com.