“Their Town,” September 23 through October 1 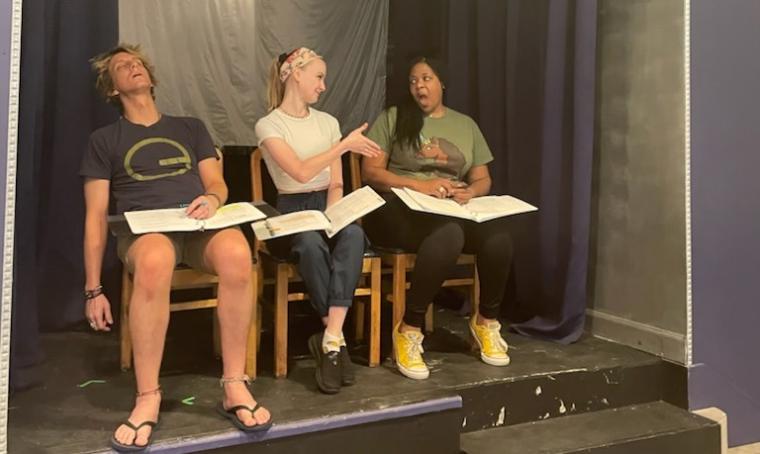 Adam Cerny, Taylor Lynn, and Alisha Haynes rehearse "Their Town" at the Mockingbird on Main -- running September 23 through October 1.

From September 23 through October 1, Davenport venue the Mockingbird on Main will house writer/director Alexander Richardson's re-imagining of Thornton Wilder's stage classic Our Town, fittingly titled Their Town. If the title sounds familiar, that might be because the show was recently staged at the Playcrafters Barn Theatre in Moline. If you weren't able to see it, Richardson absolutely understands a potential reason why: It was staged in March of 2020.

“The first thing I noticed when I was re-reading the script,” says Richardson, “was that it was set in June of 2019, which, at the time, wasn't a really salient or important date. It ends in January of 2020, which, at the time, didn't really mean anything. But now, in retrospect, I thought, 'Oh... this is like that last moment before COVID.' And now that we are effectively out of it, even though people are still getting sick by the day, and we're back to 'normal,' I knew that I wanted to do it again. We literally closed that show the day before the national quarantine started, so not many people saw it – which was the safe call at the time.”

Those who did see Their Town saw a charming production that both paid tribute to and slyly tinkered with Wilder's unassuming yet thematically grand portrait of life in small-town New England at the turn of the 20th century. (Reviewing Richardson's drama for the Reader, Pamela Briggs wrote, “I suspect that no matter who you are, you'll find a Their Town character – probably more than one – with whom you'll identify. ... I encourage you to check this one out and be amazed by the breadth and depth of our local talent.”) Yet that didn't mean that, in the 30-month interim between Playcrafters and Mockingbird productions, Richardson didn't see room for improvement.

“I ran the script by [former St. Ambrose University theatre professor] Cory Johnson,” he says, “and she gave me a bunch of wonderful feedback. And one of the things she challenged me with was saying, 'You use projections, but you don't do much with them.' Like, I have the Stage Manager role from Our Town split into a man and a woman. They play all of the ensemble roles in the town, and we kind of did it documentary-style, where they would play a new character and we would project, for instance, 'Amanda Burner, 29,' giving the character's name and their age. But we had a performance during the run where the projector just didn't work that night, so we had to cut the projections entirely, and I was like, 'Wow … we didn't really lose anything.'”

With a laugh, Richardson continues, “So that got me thinking, 'Yeah, maybe I can find a better way to use the projector.' So this time around, the projector kind of informs how characters are feeling. There's a scene in the show where Emily Webb gets some really devastating news from a doctor, and we see her inner monologue running down the walls, projecting her inner thoughts. And there's a scene where George Gibbs is buying his parents' farm and he's out all the paperwork, and the notary who's helping him finds out that he's buying this farm for his girlfriend and she doesn't know it. Tthe notary is like, 'You might want to pump the brakes on this decision.' So now, when George gets to the final signature line, we see the signature on the wall, and the line starts wrapping around the entire stage, because it's such an overwhelming thing for him.

“I was trying to find out how I could make the projections more impactful – where if we lose the projector for the night, it actually is going to set the show back a little bit.” 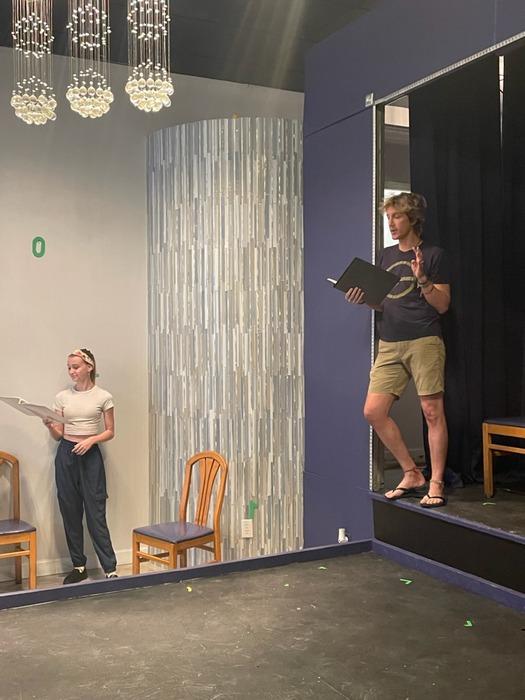 Regarding other elements of his updated Their Town, Richardson says, “The second and third acts I didn't really have to do too much to. I did make some tweaks and cuts that made it flow a little smoother. And I've found, from directing my own shows, that the interests of the writer and the director could not be more separate. I've had a lot moments during this process where there'll be a really nice little speech, but it's not getting us any closer to what I want to say, so we've gotta get rid of it.

“But most of the changes I made were in Act I,” he continues, “and I think they really solidify the through-line of the show, which is asking people to take stock of their lives and where they are and where they've been. Which is, I think, kind of the moral of Our Town. And what we're doing with this show, I think, is trying to find ways to tell that same moral, and that same message, in a way that feels more relatable to people today.”

Yet even identical aspects between the 2020 Their Town and its 2022 version will be inherently dissimilar, given that Richardson has employed a completely new cast for the Mockingbird's presentation.

“I actually made a deliberate effort not to bring anyone over from the Playcrafters production,” says Richardson. There was one particular role – it was Brant Peitersen's – where I was like, 'He's literally perfect for this.' But I didn't want to go back to him again, because he's already done it perfectly. I mean, it would have been nice to have him do it again, but if I have six other people in the cast who are all different, why not just find another actor and make it all new?”

Consequently, Richardson's new version features Adam Cerny and Taylor Lynn in the paired Stage Manager roles; Emmalee Hilburn as Michelle, the radio-DJ character formerly played by Peitersen; Alisha Hanes from Richardson's Mockingbird productions of Your Better Self and An Enemy of the People; and Drew DeKeyrel, Brittany Anderson, and Louie Fischer. If you've attended a show at the Circa '21 Dinner Playhouse over recent years, you'll likely recognize Louie – though not from his stage performances.

“I think he's there every night,” says Richardson with a laugh. “He's been a benefactor of Circa for so many years now, he sees everything many times over, he takes the casts and the Bootleggers bowling every Sunday after the show … . And he's never acted before – ever. Deciding to act for the first time at, like, 71 years old. He's so sweet. He's so sweet and doing such a great job – and the Bootleggers said they're going to show up to final dress rehearsal with signs cheering him on. Of everyone, he's the one I'm most excited to see: 'Where does he go from here?'”

Their Town runs in downtown Davenport from September 23 through October 1, with performances Fridays, Saturdays, and Thursday September 29 at 8 p.m. Admission is “pay what you can” ticket pricing, and more information and reservations are available by visiting TheMockingbirdOnMain.com.