These Doors Are Made for Slamming, and That's Just What They'll Do: “Noises Off,” at the Timber Lake Playhouse through June 30 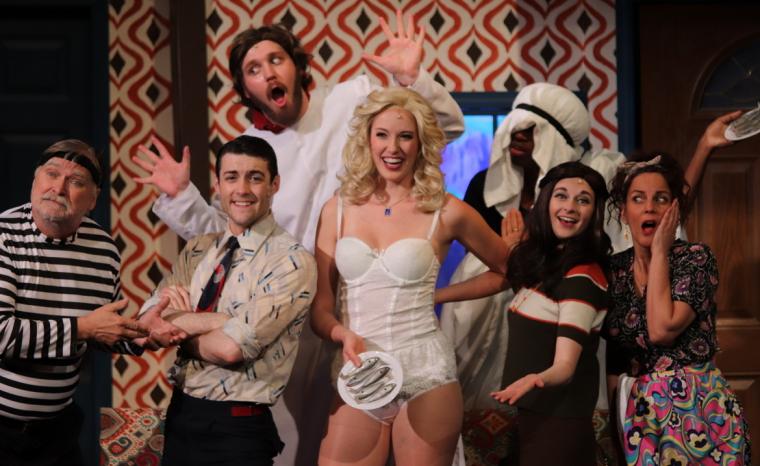 Noises Off, by English playwright Michael Frayn, is a 1982 comedic farce of epic proportions, and you will likely either love this show or hate it. The guy sitting next to me, for instance, did not come back after intermission. The lady in front of me laughed hysterically. And an older fellow in the front row seemed to be dozing off. So there was definitely a wide range of audience reactions to this gag-filled production.

Personally speaking, I thought Sunday’s matinée performance, directed by Kevin Thies, was technically strong, compliments of technical director Addison Calvin. But even though I can appreciate talented performers when I see them, I just don’t find slapstick all that funny, and found Noises Off's plot thin yet so difficult to follow that a little pre-show research wouldn’t be a bad idea if you're unfamiliar with the storyline. There are, however, silly running themes having to do with doors and sardines, with added trouser drops and lots of physical action.

Set in 1978 London, the play within the play takes place in the living room of a country home where a third-rate company of actors are rehearsing for the play Nothing On, a mindless sex farce with an energy level that is definitely off-the-charts. The performers are constantly running up and down stairs, in and out of doors, and through the audience; you will be exhausted, even a little dizzy, just watching the action, and there was so much going on at once that I found it hard to keep up.

The uniqueness of this show is that it gives the audience a backstage view of the goings-on that include volatile relationships, love triangles, and mayhem of all sorts, and Timber Lake's rotating stage really came in handy as the audience got to see the set spin around for a dramatic backstage view. Technically, Thies' production was quite complicated, full of various doors and front and back staircases that the actors had to masterly maneuver in order to pull off a multitude of very physically demanding gags. And, admittedly, the timing and preciseness of the cast members' slapstick bits were brilliantly done.

Conor Jordan portrayed Noises Off leading man Garry Lejeune, a womanizer incapable of finishing a sentence unless it's written down, and he probably had one of the most demanding roles in the entire show. (He also plays estate agent Roger Tramplemain in Nothing On.) Jordan came across as a James Bond gone wrong, and with his sexy British accent, it really worked for me. Playing his love interest Dotty Otley and also the absentminded Mrs. Clackett, Laura Spaeth employed a spot-on British accent and her stage confidence really shined through.

James Tweedale, as the sarcastic and frustrated director Lloyd Dallas, was quite entertaining as he started the show behind the audience shouting directions to his actors. As the play continues, Tweedale makes his way through the audience with a certain savoir-faire that makes him very likeable. Portraying Brooke Ashton, the young self-absorbed actress who is constantly losing her contact lens, Evan Bertram is one tall, well-cast drink of water. As the seductress Vicki in Nothing On, Bertram barely had anything on, and was clad in lingerie for the majority of this play that also required her to crawl around on the floor a lot.

Morgan Arrivillaga’s portrayal of Poppy Norton, the bumbling assistant stage manager who is forever trying to save the show, was one of my favorites. I found Arrivillaga’s energy and total abandon in the role refreshing, and Blake West does a fine job with his dim-witted character Freddie Fellowes, who also stars as Phillip Brent in Nothing On' dressed in a leisure jacket, large-collar shirt, and loud pants by costume designer Kat Anderson, Freddie is a poster child for the '70s era. And rounding out the cast are Rebecca Marowitz, Jean Christian Barry, and Paul Vander Vennet, all of whom were delightful to watch.

Although Noises Off wasn’t my cup of tea, I think it was very well done for the slapstick genre, and if you like that sort of thing, you'll probably love the show. I was at least impressed with the talented performers, who pull this production off like it’s easy, and God knows it can't be easy.

Noises Off runs at the Timber Lake Playhouse through June 30, and more information and tickets are available by calling (815)244-2035 or visiting TimberLakePlayhouse.org.