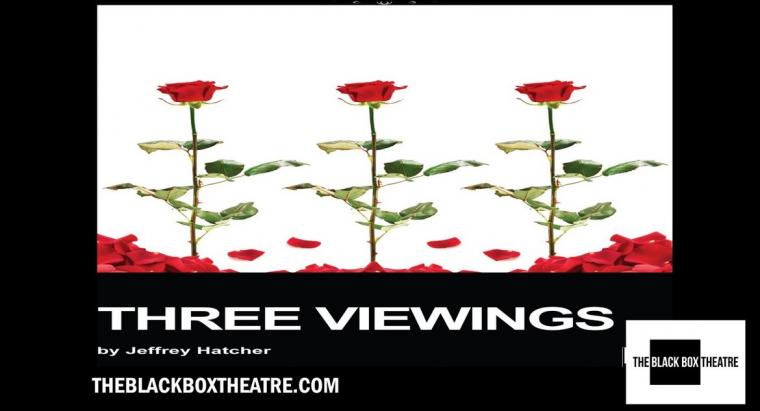 "Three Viewings" at the Black Box Theatre -- September 24 through October 3.

With its author praised by the New York Times for “his knack for telling stories that, at the very moment when they seem to be settling into predictable paths, throw in a zinger,” Jeffrey Hatcher's darkly hilarious Three Viewings enjoys a September 24 through October 3 run at Moline's Black Box Theatre, the playwright lauded by the Los Angeles Times for “his gifts [that] are distinctive, unmistakable, and quite a bit of fun to boot.”

A trio of alternately comedic and dramatic monologues set in a Midwestern funeral parlor over a three-day Christmas weekend, Three Viewings is the third Hatcher play to be produced at the Black Box, following the theatre's 2017 production of Murderers (the venue's debut offering) and this past July's The Turn of the Screw. The first solo piece, “Tell-Tale,” is the story of Emil, the mild-mannered undertaker whose unspoken passion for a local real-estate woman – one who comes to all his funerals – leads him to commit crimes and plot a way to confess his true feelings before time, and bodies, run out. “The Thief of Tears” concerns the Los Angeles drifter Mac, who makes her living stealing jewelry from corpses. When her wealthy grandmother dies, leaving her nothing, Mac returns to her hometown and attempts to pry loose her inheritance: a diamond ring she was promised as a child. “Thirteen Things About Ed Carpolotti” tells the tale of Virginia, a contractor's widow who discovers that her husband has left her in debt to the banks, her family, and the mob, and that she has exactly three days to come up with one million dollars. Taken together in Three Viewings, Hatcher's monologues result in what the River Cities' Reader called “about as enjoyable a stage presentation as you're likely to find anywhere.”

Directing the play for the Black Box is venue co-founder and artistic director Lora Adams (Murderers), who also helmed the recent The 39 Steps: A Live Radio Play and performs one of Hatcher's trio of Three Viewings monologues. Two additional Black Box veterans, meanwhile, complete the new production's cast: James Driscoll (War of the Worlds: A Radio Play) and Kayla Jo Pulliam (The Turn of the Screw).

Three Viewings will be staged at the Black Box Theatre from September 24 through October 3, with performances Thursday through Saturday at 7:30 p.m. and Sunday at 2 p.m. As the theatre is abiding by Illinois' Phase 4 restrictions, patrons will be required to wear face masks, and only certain seats will be available in order to conform to social-distancing guidelines. Temperatures will be taken before entry, and the theatre has hand sanitizer available and will be disinfecting every seat before each show. Advance purchase of tickets is highly recommended in order to avoid the handling of money, and more information and reservations are available by visiting TheBlackBoxTheatre.com.