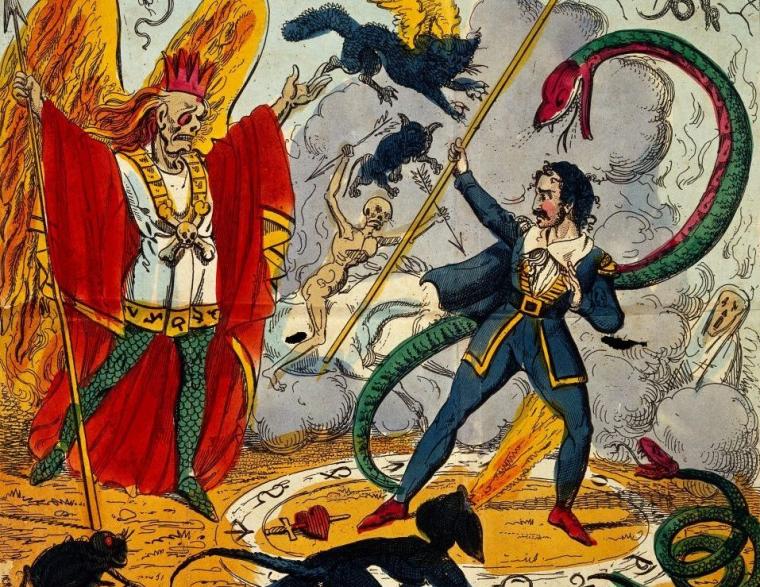 Although audiences for its live performances, due to current health and safety measures, are being restricted to the college's students, faculty, and staff, the general public will still be able to see the Augustana College theatre department's season-opening production of The Tragical History of Doctor Faustus, the thrilling and terrifying Christopher Marlowe classic that will be shown in virtual format on November 7.

The Tragical History of Doctor Faustus opens with its title character dissatisfied with the studies of medicine, law, logic, and theology, and deciding to turn her attentions to the dangerous practice of necromancy, or magic. When she is alone in her study, Faustus begins experimenting with magical incantations, and suddenly Mephistopheles appears in the form of a hideous devil. After initially sending him away, Faustus discovers that it is not his conjuring that brings forth Mephistopheles, but rather that when anyone curses the trinity, devils automatically appear. Faustus consequently sends Mephistopheles back to hell with the bargain that if Faustus is given 24 years of absolute power, he will then sell his soul to Lucifer. What comes of this unholy deal is laced with horror, tragedy, and even humor, resulting in a theatrical classic that has enthralled theatre-goers ever since its debut in the late 16th Century.

Serving as The Tragical History of Doctor Faustus' director is Augustana senior SophiaRose Brown, whose acting credits at the college have included roles in In the Next Room (or The Vibrator Play), The Children's Hour, and The Crucible. Doctor Faustus is played by Lauren Larson, a castmate in Augustana's How to Succeed in Business without Really Trying and She Kills Monsters, with Mephistopheles portrayed by Alyssa Frazier. The show's ensemble is completed by Lauren Clarke, Meghan Gove, Titus Jilderda, Maxwell Johnson, Emily Keiner, Roger Pavey (also serving as sound designer), and Haley Tromblee, and its production staff includes Trinity Filut, Synthia Gonzalez, Noah Hill, Megan Hoppe, Jacqueline Isaacson, Cassandra Karn, and Johan Roman.

Augustana's online presentation of The Tragical History of Doctor Faustus will take place at 7:30 p.m. on November 7, virtual tickets are available at “pay what you can” pricing, and ticket-holders will be sent a Zoom link to the performance within two to three business days. For more information on the event, call (309)794-7306 or visit Augustana.edu/theatre.