Tricks in Their Pockets, Things Up Their Sleeves: The Mississippi Bend Players' “The Glass Menagerie,” at Augustana College through July 22 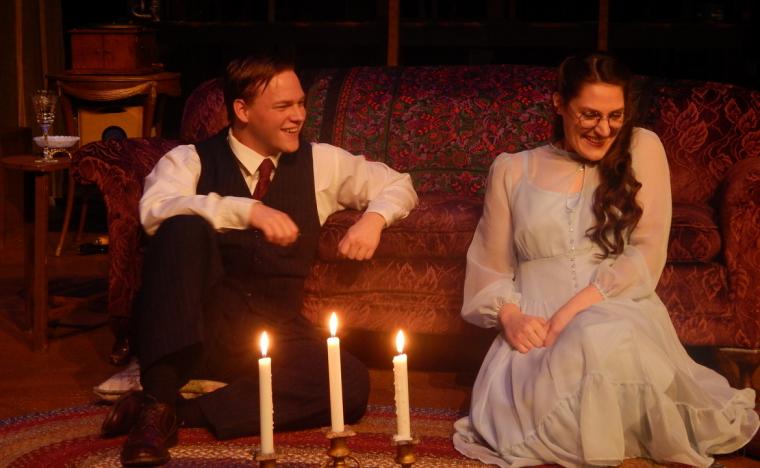 As the wind blew and the rain poured, I was concerned about making it to the current play at Augustana College's Brunner Theatre Center without being swept away by the currents of water flooding the streets of Rock Island. Thankfully, though – and with added thanks to Cart to the Art driver John D'Aversa – even a severe thunderstorm couldn't keep me from the Mississippi Bend Players' opening-night production of The Glass Menagerie.

Once I was happily seated in the theatre, I was treated to director Corinne Johnson's cozy, dimly lit, and very welcoming set – complete with a lovely chandelier – compliments of scenic designer Susan Holgersson and lighting designer Chris Howard. The sight was an appropriate start to Tennessee Williams' memory play, one based on the author's own family, narrated by Tom Wingfield (Seth Kaltwasser), a young man who recollects life with his Southern-belle mother Amanda (Megan Cox) and fragile sister Laura (Marjorie Gast), and who references the absent father that abandoned them.

The Wingfields are housed in a small apartment in St. Louis where Amanda longs for better days, but her overbearing and controlling behavior has caused animosity between her and the grown children she so much loves. In the opening dinner scene, for example, Amanda thinks she's being helpful in explaining to Tom and Laura the proper way to chew their food, while Tom laments that he's not even able to enjoy it due to her excessive micro-management. 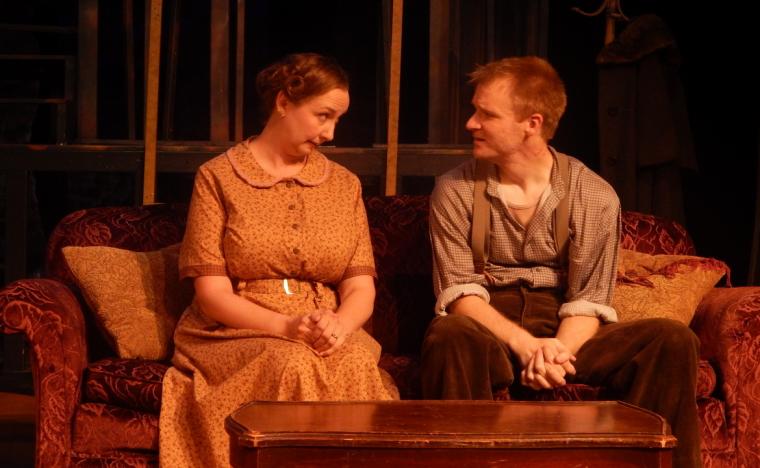 Cox gave an outstanding performance – so much of one that at times I felt like I was watching a one-woman show. I was fascinated by Cox's ability to flutter about the stage, practically singing her lines, while she completely transformed herself into the well-meaning yet extremely annoying Amanda. Throughout the show, Cox was a pleasure to watch, and earned many laughs from our audience.

Kaltwasser was equally fascinating to watch, the actor portraying Tom's built-up frustration and anger over years of trying to support his family on a meager income while dreaming of becoming a great writer. Thanks to Kaltwasser, I truly felt for Tom in his dilemma – loving his family but being so ready to leave and pursue his own dreams.

Much of The Glass Menagerie involves Amanda trying to fix Laura up with a beau and prepare her for her gentleman caller Jim O'Connor (Keenan Odenkirk) – a co-worker of Tom's who aspires for more in life by taking public-speaking classes that he believes will help him become an executive. Jim and Laura actually knew each other in high school, where Jim was quite popular and well-liked, and Odenkirk is very well-cast in his role. A boisterous actor with a strong speaking voice and stage presence, Odenkirk delivers exactly what Jim's confident character requires. Jim’s overconfidence nicely contrasts with Laura's weak and quiet figure, and with Gast wearing a leg brace, costume designer Christina Johnson dressed her in the frumpiest of clothes and nerdy glasses, adding visual impact to Laura’s inferiority complex. 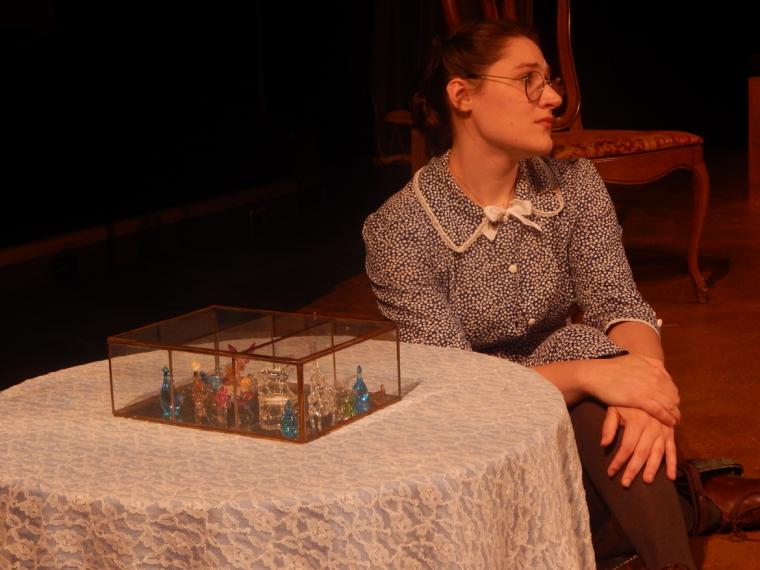 As the tale progresses, we learn how Laura had been stricken with pleurosis during her high-school years (prompting Jim to nickname her “Blue Roses”), with Jim now taking it upon himself to try to build Laura’s confidence, encouraging her to embrace her differences rather than loathe them. And aided by her costuming and hairdo, Gast played her role wonderfully. She really mastered Laura's awkward body language and difficulty in making eye contact, which helped me feel compassionate toward her odd character. As Laura gazes into her glass-animal collection (the menagerie of the title), you can’t help but wonder what's going on in that strange little head of hers.

Although there were only four characters in the play, it had quite a complex and intriguing storyline, while the violin music and rumbling rain effects (by sound designer Calvin Vo) and Holgersson's great fire-escape-staircase design helped create an enchanting experience. With Johnson's actors proving exceptionally talented, and with credit also going to Isabel Dawson's behind-the-scenes stage management, the entirety of this Glass Menagerie was very well done.