“Tuesdays with Morrie,” September 14 through 23 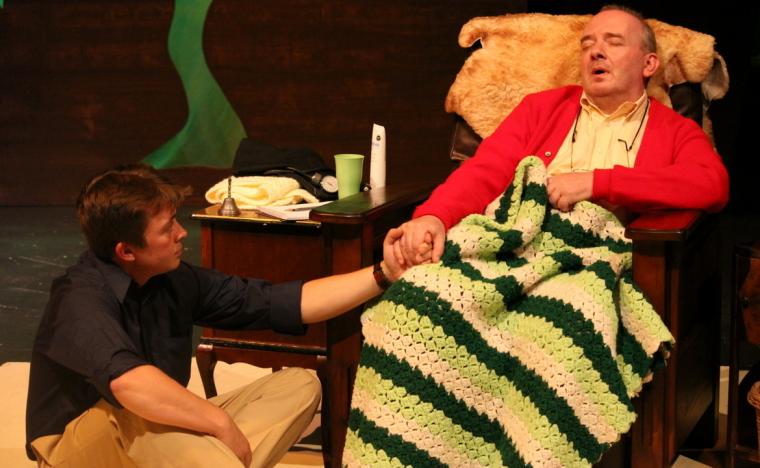 Aaron Lord and Kevin Babbitt in Tuesdays with Morrie at the Playcrafters Barn Theatre -- September 14 through 23.

Described by ChicagoCritic.com as “very beautiful and moving” and “a wonderful tale of personal bonding that transcends the grave,” Tuesdays with Morrie – the stage adaptation of Mitch Albom's bestselling memoir – runs at the Playcrafters Barn Theatre September 14 through 23, with Variety magazine calling the two-man drama a “life-affirming” work “poignantly emphasizing the necessity of enjoying life while we have it.”

Adapted by playwright Jeffrey Hatcher, Tuesdays with Morrie is the autobiographical story of Albom, shown here as an accomplished journalist driven solely by his career, and Morrie Schwartz, the writer's former college professor. Sixteen years after graduation, Mitch happens to catch Morrie's appearance on a television-news program and learns that his old professor is battling Lou Gehrig's Disease. Mitch is consequently reunited with Morrie, and what starts as a simple visit turns into a weekly pilgrimage and final class on the meaning of life. Also the basis for an Emmy-winning TV-movie starring Jack Lemmon and Hank Azaria, Tuesdays with Morrie topped the New York Times Non-Fiction Bestsellers list for 2000, remaining on the list for a remarkable 205 weeks. Albom's book has also been translated into 45 languages and is now the best-selling memoir of all time, with more than 14 million copies sold worldwide.

Directing Tuesdays with Morrie is Jeff Ashcraft, a River Cities' Reader theatre reviewer who previously directed On Golden Pond for Playcrafters and musicals including Children of Eden and Jesus Christ Superstar for Countryside Community Theatre. Portraying Morrie is Ashcraft's On Golden Pond star Kevin Babbitt, a theatre professor at Scott Community College whose own directing credits include The Laramie Project, God of Carnage, and Baby with the Bathwater. And playing Mitch Albom is Playcrafters veteran Aaron Lord, whose credits for the Moline venue have included roles in this past spring's The Christians, and Neil Simon's Proposals and Rumors.

Tuesdays with Morrie runs September 14 through 23 with performances on Fridays and Saturdays at 7:30 p.m. and Sundays at 3 p.m. Admission is $13, and more information and tickets are available by calling (309)762-0330 or visiting Playcrafters.com.