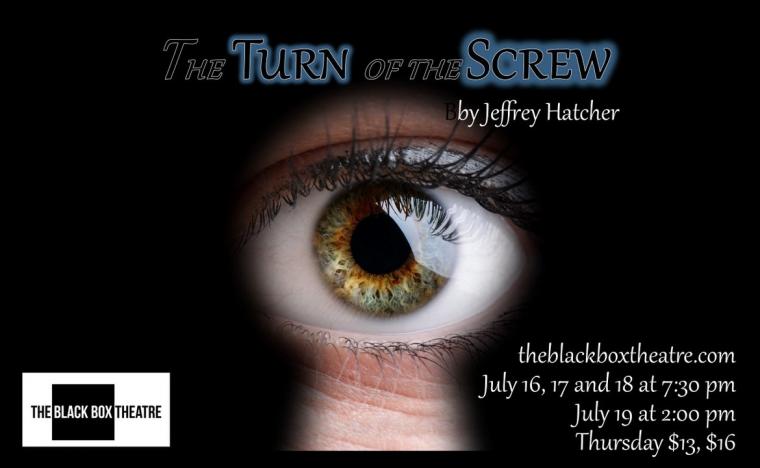 Described by the Los Angeles Times as “an ingenious twist on an old-school ghost story” and, according to the British Theatre Guide, boasting “plenty of moments that are funny, frightening, or exciting,” playwright Jeffrey Hatcher's take on Henry James' classic chiller The Turn of the Screw enjoys a four-performance run at Moline's Black Box Theatre July 16 through 19 – the Quad Cities' first stage production since theatres nationwide closed in mid-March.

Based on James' 1898 horror novella that has led to numerous radio, film, stage, and television adaptations over the years, Hatcher's 1997 The Turn of the Screw gives the famous story a unique twist by being performed by only two actors. Its story finds a young governess journeying to a lonely English manor house to care for two recently orphaned children. She is not, however, their first governess, as the young woman's predecessor Miss Jessel, drowned herself when she became pregnant by the sadistic valet Peter Quint, who was himself found dead – under mysterious circumstances – soon after. Now the new governess has begun to see the specters of Quint and Jessel haunting the children, and she must find a way to stop the fiends before it's too late. But one frightening question tortures The Turn of the Screw's would-be-heroine: Are the ghosts real, or are they the product of her own fevered imagination?

With Hatcher's spine-tingling version of this legendary ghost story called “a spooky tale that keeps the audience gripping their seats until the very end,” the Black Box Theatre's take on The Turn of the Screw is being directed by the venue's co-founder and artistic director Lora Adams, whose most recent productions for the company include The Man with Bogart's Face, Silent Sky, Lady Day at Emerson's Bar & Grill, and this past January's I Never Saw Another Butterfly. Adams also designed the thriller's set and costumes, with Black Box co-founder David Miller serving as lighting designer and the set constructed by Michael Kopriva.

Portraying the show's unnamed governess protagonist is Kayla Jo Pulliam, a recent new arrival to the Quad Cities who makes her area stage debut with Adams' presentation. And portraying four distinct characters opposite Pulliam, Matt Walsh appeared in the Black Box's production of The War of the Worlds: A Radio Play, as well as Genesius Guild's The Tempest, As You Like It, and The Merchant of Venice.

The Turn of the Screw will be staged at the Moline venue from July 16 through 19, with performances Thursday through Saturday at 7:30 p.m. and Sunday at 2 p.m. As the theatre is abiding by Illinois' Phase 4 restrictions, patrons will be required to wear face masks, and only certain seats will be available in order to conform to social-distancing guidelines. Temperatures will be taken before entry, and the theatre has hand sanitizer available and will be disinfecting every seat before each show. Advance purchase of tickets is highly recommended in order to avoid the handling of money, and more information and reservations are available by visiting TheBlackBoxTheatre.com.