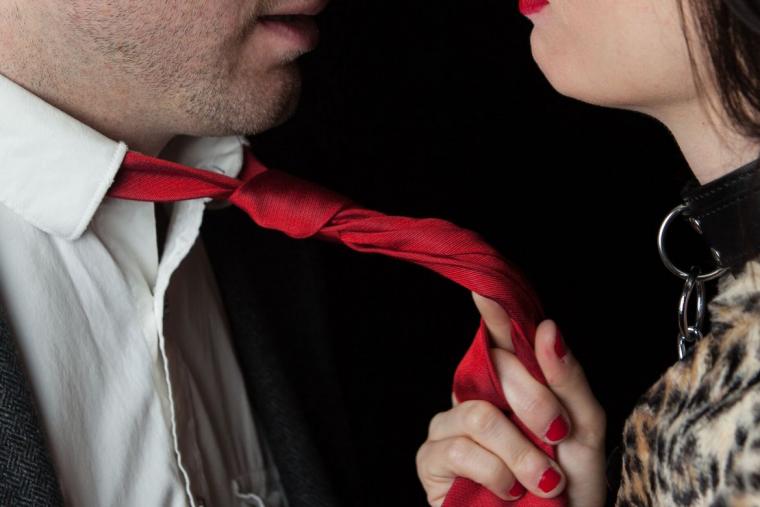 Venus in Fur at the QC Theatre Workshop -- March 9 through 25.

A dark comedy of desire, gamesmanship, and shifting power dynamics hits the QC Theatre Workshop when the Davenport venue presents the area debut of the Brodway hit Venus in Fur, a 2011 Tony Award winner that the New York Times called “a seriously smart and very funny stage seminar on the destabilizing nature of sexual desire,” and that Time Out New York lauded as “deliciously twisty and witty fun.”

Written by Tony nominee David Ives, Venus in Fur opens on writer/director Thomas Novachek as he attempts to cast his stage adaptation of an 1870 German novel that helped coin the term “masochism.” Frustrated by a lack of options for his female lead, Thomas is on the verge of giving up when actress Vanda Jordan bursts into the room – brash, vulgar, and seemingly all wrong for the part. But Vanda convinces Thomas to let her audition, and as lightning flashes and thunder crashes, she shows astounding insight into the play and her character that seem nearly impossible to believe.

Directing Venus in Fur is Reader employee Mike Schulz, who has appeared on-stage in such Workshop presentations as Peter & the Starcatcher, Buried Child, and Bat Boy: The Musical. And portraying the two-character play's Thomas and Vanda are Workshop veterans and newly married performers Thomas Alan Taylor and Jessica Taylor (née Denney), who co-starred in the theatre's productions of Broken, A Green River, Private Eyes, and boom! Thomas' other Workshop credits include The Pillowman, A Steady Rain, and the venue's 2012 debut RED, while Jessica has enjoyed roles in Peter & the Starcatcher, Inheritors, and Tribes.

Venus in Fur runs Fridays and Saturdays at 7:30 p.m. and Sundays at 3 p.m., admission is “pay what it's worth” ticket pricing, and more information and reservations are available by calling (563)823-8893 or visiting QCTheatreWorkshop.org.