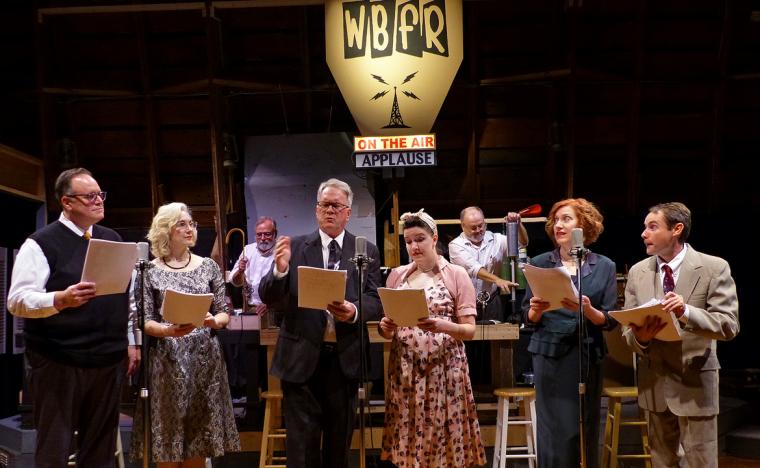 One of the most recognizable and adored filmmakers of all time will have three of his classics reinterpreted in a brand-new yet old-time way from September 29 through October 9, with the Richmond Hill Barn Theatre serving up chills, laughs, and even some catchy jingles in the Geneseo run of Vintage Hitchcock: A Live Radio Play.

In Vintage Hitchcock, spies, murder, love, and other Alfred Hitchcock trademarks all come to life as a 1940s-era radio broadcast of the Master of Suspense's early films, showcasing The Lodger, Sabotage, and The 39 Steps. This is the Hitchcock of the 1920s and ‘30s, before he came to America – a familiar figure in many respects, but also one to surprise those who aren’t yet acquainted with Hitch’s work while he was still honing his craft. Richmond Hill's presentation is a triple feature complete with vintage commercials, one that recreates, among numerous other thrilling events, a serial killer’s ominous presence, a daring train chase, and a devastating explosion utilizing the magic of live sound effects and musical underscoring. It’s a spooky, exciting piece performed in a singular format, and one that the Atlanta-Journal Constitution called a "well-crafted" work that celebrates "the aural magic of this tingly film auteur."

Vintage Hitchcock runs at the Richmond Hill Barn Theatre September 29 through October 9, with performances Thursdays through Saturdays at 7:30 p.m. and Sundays at 3 p.m. Admission is $12, and more information and tickets are available by calling (309)944-2244 and visiting RHPlayers.com.