“The Wedding Singer,” February 14 through 23 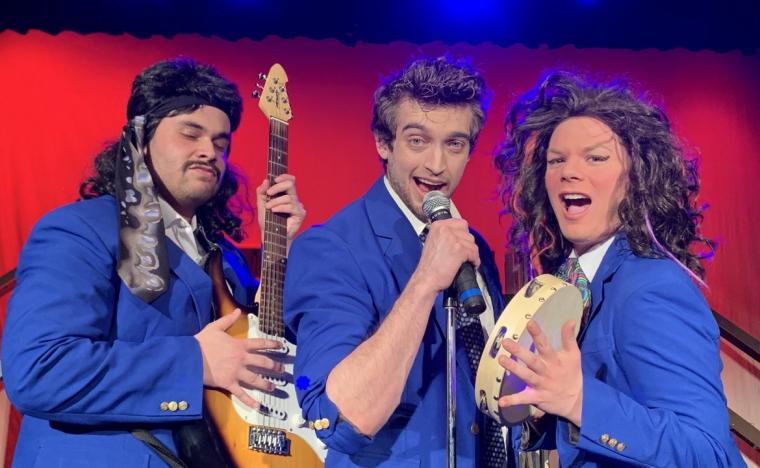 Adam Sanders, Chase Austin, and Sethe Christensen in "The Wedding Singer" at the Spotlight Theatre -- February 14 through 23.

Nominated for five 2006 Tony Awards including Best Musical and described as a “fizzy confection” by Variety magazine, the musical version of Adam Sandler's film-comedy smash The Wedding Singer enjoys a local run at Moline's Spotlight Theatre February 14 through 23, with composer Matthew Sklar and lyricist Chad Beguelin praised by New York Theatre Guide for their 1980s salute and its “truly clever and often hilarious score.”

It's 1985 as The Wedding Singer opens, and rock-star wannabe Robbie Heart – who still lives in his grandmother's basement – is New Jersey's favorite wedding singer and the life of every party … until his fiancée Linda leaves him at the altar. Shot through the heart, Robbie is so distraught that proceeds to make every wedding reception as disastrous as his own. When he meets an admiring young waitress named Julia, however, Robbie falls madly in love. The only trouble is that Julia is about to be married to a Wall Street shark, and unless Robbie can pull off the performance of the decade, the girl of his dreams will be gone forever. With a score that pays loving homage to the pop songs of the 1980s, The Wedding Singer takes audiences back to a time when hair was big, greed was good, collars were up, and a Jersey wedding singer might just have been the coolest guy in the room.

The Wedding Singer runs at the Spotlight Theatre from February 14 through 23 with performances at 7:30 p.m. on Fridays and Saturdays and 2 p.m. on Sundays. Admission is $20, and more information and tickets are available by calling (309)912-7647 or visiting TheSpotlightTheatreQC.com.