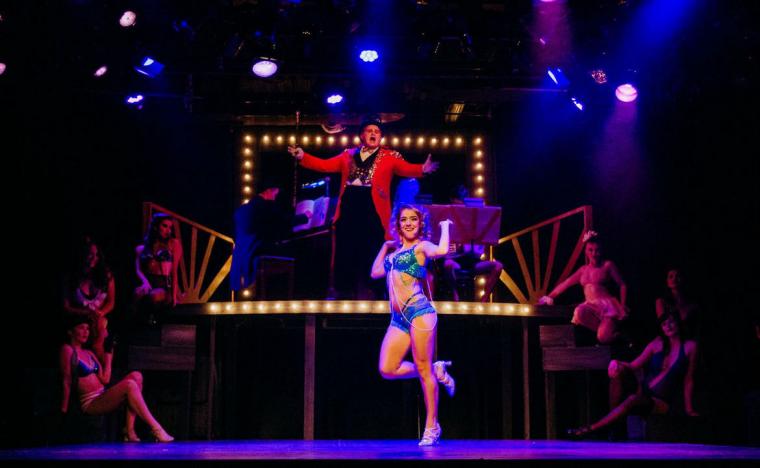 The first thing I noticed as I walked into Thursday's stunning, powerful, opening-night performance of the Clinton Area Showboat Theatre's Cabaret was the temperature. As I glanced around looking for meat hooks, I realized that many of the theatre's more seasoned attendees had brought along sweaters, coats, and even blankets. But the chill in the air gave no indication of the show's eventual heat.

A Tony-winning musical with book by Joe Masteroff, music by John Kander, and lyrics by Fred Ebb, Cabaret takes place in early-1930s Berlin at the beginning of the rise of Nazism, and while the inside of the theatre may have been frigid, on stage – inside the smoky Kit Kat Klub where the lion's share of Cabaret takes place – it's unmistakably steamy. So hot, in fact, that as the Emcee (Nick Berninger) introduces the club's Kit Kat Girls, he remarks, “Every night we have to battle with the girls to keep them from taking off all of their clothing.” Not that there's a lot of clothing to be removed, as neither the Girls nor the two Cabaret Boys are wearing more than the bare minimum. (Attendance hint: Don't bring the young 'uns.) Even the band members, who perform on an up-stage platform, get into the act, with several musicians dressed in drag and/or fishnet stockings.

But don't be fooled by the sultry dancing and bawdy sexual innuendos. For in Cabaret, what starts out as a salacious song-and-dance revue eventually descends into dehumanization and death. The Emcee here is not only instrumental in moving the action along at the Kit Kat, but also embellishes the plot through musical numbers (“Two Ladies,” “Money”), and Berninger commands the stage with both a carnival barker's booming voice and a natural knack for physical comedy and timing. His voice was at times as angelic as a boy soprano's, as in the song “Married,” but Berninger's demeanor could change as fast as that of a pit bull protecting her litter. It's a riveting performance. 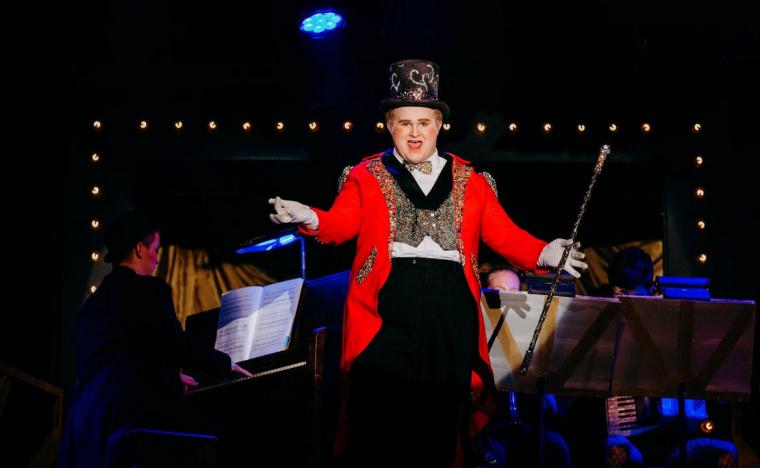 The story opens on Cliff Bradshaw (Grant Reynolds), an aspiring American writer visiting Germany for the first time. On the train to Berlin, he befriends the small-time smuggler Ernst (charmingly played by Ben Cherington), who helps Cliff get settled in Berlin by helping him acquire lodging at the boarding house of Frauhlein Schneider (Nancy Teerlinck). They plan to celebrate that night at the Kit Kat, which is where Cliff meets Sally Bowles (Madison Deadman), a professional party girl and featured performer who has left her native England in search of stardom, fun, and gin.

Deadman's Sally is like a kitten with ADHD, full of energy and charm, and consequently overwhelming Cliff and disrupting his life and work. Reynolds, meanwhile, does an outstanding job of playing a man who has suddenly found himself in the middle of a hurricane in unfamiliar surroundings. As a romance between Sally and Cliff unfolds, it becomes clear that Cliff's moral indignity over the rise of the Nazis is at odds with Sally's laissez-faire attitude, even as she struggles to foreswear her decadent lifestyle. She's tempted to run to America to start a family with him, and after she makes her ultimate decision, Deadman's rendition of the title song is one of the most powerful I've ever heard, full of realization, resolve, and maybe a little regret.

Cabaret also offers a budding romance between the aging spinster Schneider and Herr Schultz (Rob Engelson), a fruit-shop owner who delights in surprising Schneider with fresh produce. The playful chemistry between Teerlinck and Engelson especially played out in the song “It Couldn't Please Me More,” with Engelson's facial expression as he's invited in for the evening, and the obvious affection they show for each other when they announce their engagement, making it all the more tragic when Teerlinck sang of their unfortunate break-up in “What Would You Do?” Also of note is Cherington's portrayal of Ernst, whose character evolution through the course of the show was seamless and believable. 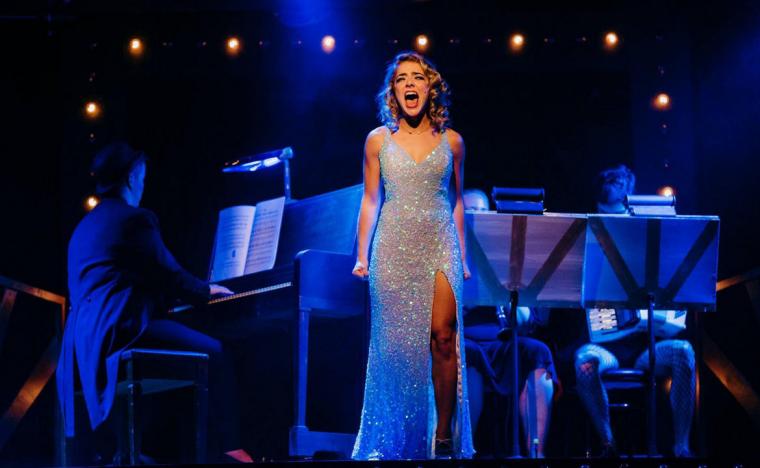 Director Matthew Teague Miller is to be credited for delivering a fast-paced and energetic production throughout. Although I was a little taken aback, at first, by the use of canned applause and laugh tracks, they proved to be employed sparingly and appropriately to help convey the atmosphere of the club. And Heather Banks also deserves credit for some of the most – ahem – provocative choreography I've ever seen on an area stage.

One of the most intriguing moments of the evening, for me, was our crowd's reaction to Berninger's performance of “If You Could See Her” in the second act. The audience members, myself included, appeared conflicted as to whether it was appropriate to applaud the jarring end to what was otherwise a beautifully sung number. And at the show's conclusion, we all sat in stunned silence at what I can only describe as one of the most powerful moments I've ever experienced at a theatrical production, and one I will remember for a long time to come. Come to the Cabaret, Old Chum. You won't regret it.

Cabaret runs at the Clinton Area Showboat Theatre (311 Riverview Drive, Clinton) through July 22, and more information and tickets are available by calling (563)242-6760 or visiting ClintonShowboat.org.