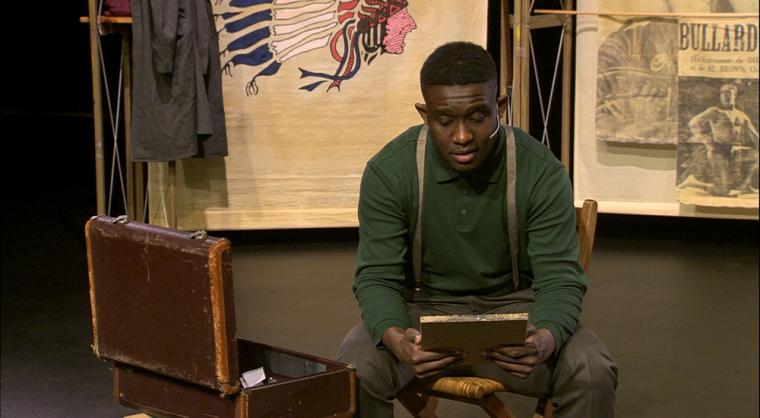 “Wings of Courage" at the University of Dubuque -- October 18.

A remarkable and largely unsung historical figure will be celebrated at the University of Dubuque's Heritage Center on October 18 when the venue and guest presenter Dr. Robert F. Jefferson Jr. present a screening of the theatrical drama Wings of Courage, the astonishing true story of adventurer Eugene Bullard, the first African American to fly a plane in combat.

An original play with music by Mad River Theater Works, Wings of Courage is based on the life of Bullard, whose biography would be unbelievable if it weren't all true. Over the course of his life from 1895 to 1961, Bullard was a professional boxer and a World War I flying ace. He was a jazz musician. He was even a spy. Born in Columbus, Georgia, Bullard traveled the world, joining the French Foreign Legion after being denied a meaningful place in the United States Army. As a part of the famous Lafayette Escadrille during World War I, he rose through the ranks and flew against the famous “Red Baron." But when the Escadrille was incorporated into the new U.S. Army Air Corps in 1917, the color of Bullard’s skin prevented him from taking his place alongside the other American heroes of his day. Yet this American inspiration went on to fame as a bandleader in Paris in 1920s, and in its employment of storytelling, music, and drama, Wings of Courage shows how Bullard’s determination and perseverance helped him to overcome discrimination throughout his remarkable life. Mad River Theater Works' presentation is an uplifting tale of vision and hope, and one that deserves to be known by every American.

Serving as special guest speaker for the October 18 event, Robert F. Jefferson, Jr. is an Associate Professor of History at the University of New Mexico, and his research focuses on the relationships between race, gender, and citizenship in 20th Century United States history. Jefferson is the author of Fighting for Hope: African Americans and the Ninety-third Infantry Division in World War II & Postwar America, which was nominated for the William Colby Book Prize, and he is currently working on two books: The Color of Disability: Vasco Hale and 20th Century America and American Negritude: Will Mercer Cook, the American Society of African Culture, & the Politics of Liberation, 1957-1968. He has also written extensively on the Black Panther Party and the relationship between African American GIs and their communities during the Second World War, and Jefferson's articles have appeared in Oral History and Public Memories, the Journal of Family History, the Annals of Iowa, Quaderni Storic, Contours: A Journal of the African Diaspora, and the Historian.

Wings of Courage and Jefferson's subsequent presentation will take place at the University of Dubuque's Heritage Center on October 18 at 7:30 p.m., and the play will also be available for viewing via paid stream between October 19 and November 19. Admission to the Monday-night event is $5-10, and more information and tickets are available by calling (563)525-7469 and visiting Dbq.edu/heritagecenter.