Witching Ours: “The Crucible,” at the Playcrafters Barn Theatre through March 17 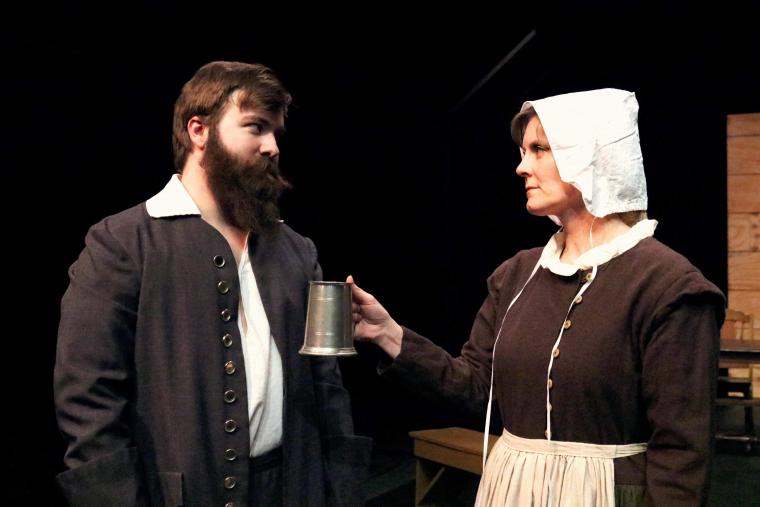 Andy Curtiss and Jessica White in The Crucible

A cold chill ran through the Playcrafters Barn Theatre at Friday's opening-night performance of Arthur Miller's 1953 play The Crucible; a riveting, partially fictionalized story about the hysteria that took place during the Salem Witch Trials in the Puritan town of Massachusetts Bay Colony in 1692. A group of young women are accused of casting spells, communing with the dead, and putting curses on children. The subsequent Salem Witch Trials, meanwhile, consisted of depositions, legal proceedings, hearsay, evidence (or lack thereof), and religious leaders of the day investigating alleged heresy and evil-doings involving the practices of witchcraft and black magic. Director Patti Flaherty delivered a provocative and captivating production that kept you interested and on the edge of your seat.

At the start, Reverend Parris (Bill Peiffer) discovers his daughter Betty (Kaitlyn Jacoby), niece Abigail (Mattie Gelaude), and other girls dancing in the woods with his slave Tituba (Jacque Cohoon). Consequently, Betty becomes ill and bedridden, and before you know it, rumors of witchcraft spread throughout the town, with the allegations escalating into full-fledged pandemonium. Tituba finally admits that she has indeed communed with the devil, and begins to name other witches in the town.

Miller's story then unfolds with twists and turns as we learn of local farmer John Proctor (Andy Curtiss), a family man who made a terrible mistake, having had an affair with Abigail when she was a servant in his home. Proctor now feels deep remorse about his indiscretions, and is scrutinized by Reverend Hale (Mischa Hooker) for not being a good Christian and attending church regularly. But Mary Warren (Bella Kuta), Proctor’s subsequent servant, learns that his wife Elizabeth (Jessica White) has now been implicated as a witch herself. 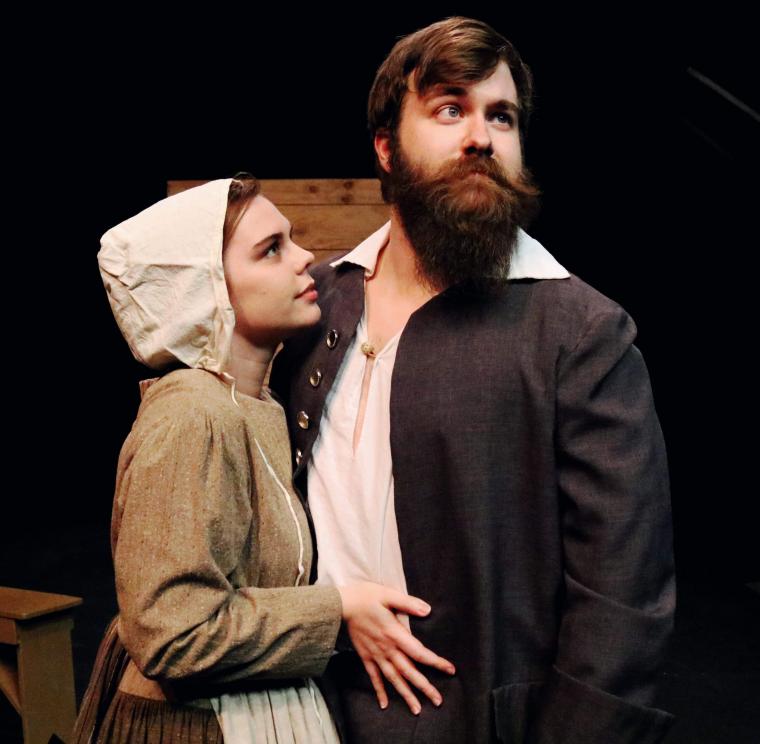 During the trial, Deputy Governor Danforth (Michael Carron) is relentless in his questioning of John Proctor and Mary Warren so as to get to the bottom of the scandal, and the young ladies who are accused sit on a courtroom bench and hiss with disapproval. The accused witches portrayed by Jacoby, Jillian Maxwell, and Cassie Dowell all do exceptional jobs of acting in unison with both their reactions and words as they eerily sync up during the court proceedings.

Curtiss and Gelaude have fantastic stage chemistry in Playcrafters' The Crucible, and both performers commanded their respective corners of the platform. For her part, Gelaude contorted her face in ways that were both fascinating and frightening, and used her eyes dramatically as she stared out into space imagining all kinds of dark entities – but were they real? That was a tangible question in Flaherty's production, and amidst all the speculation, judgment, and condemnation, it was at times hard to know what actually occurred.

Jennifer Kingry's lighting design was hauntingly beautiful and set the tone for each scene, and the sparse scenery built by Phil Cathoir was effective, with its rustic wooden look working well against the black stage and walls. I also felt that the actors all did great jobs with their Puritan dialects, and their line deliveries were understandable and easy to follow. Curtiss’ portrayal of the beguiled Proctor was particularly outstanding, with the actor mastering anger under control through his rigid body language that occasionally caused him to slightly shake. Kuta, with her ability to really connect to the character's emotions, was convincing as the fragile, hysterical Mary Warren. And Linda Larson was impressive in her small role as Rebecca Nurse, a prominent and respected older woman who is drawn into the witchcraft trials. Larson, on Friday, emanated professionalism and gave a heartfelt performance. 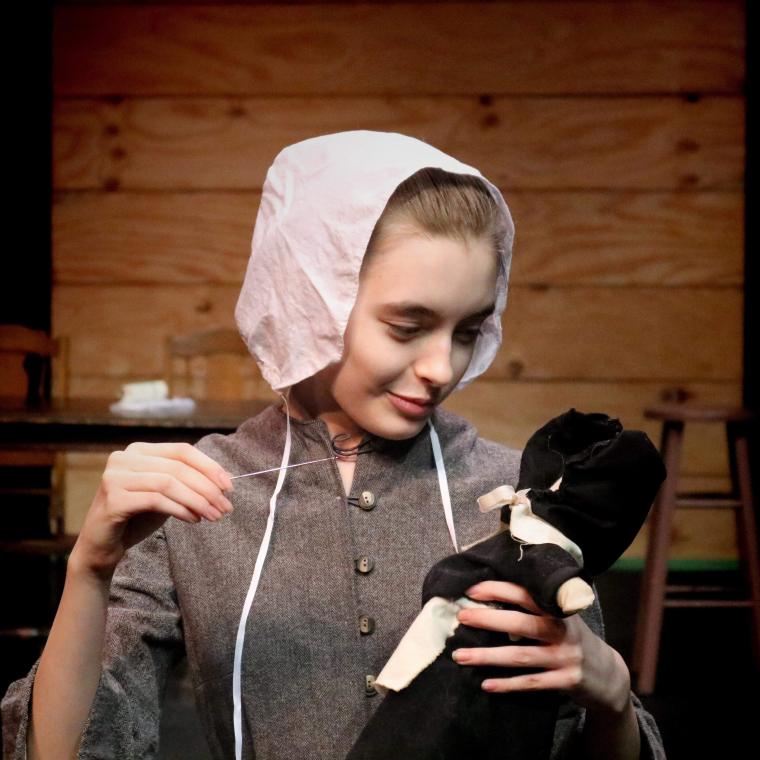 All of Flaherty's cast members, however, were quite good and well-cast, which made for a believable performance that was spellbinding. I felt like I left with a much better understanding of what happened during this time period and how it parallels with our modern-day witch hunts. Rather than trying to understand the dilemmas of those involved and help them out of occult practices, the leaders of the day instead chose to sentence them to death. As the accusations began to mount, innocent people were also brought into the situation that had nothing whatsoever to do with witchcraft or sorcery. How quickly things can get out of control when we choose to point fingers and heap everyone into the same category.

This was my first time seeing The Crucible on stage and I wasn’t sure if I was going to like it, but I honestly did enjoy learning about what happened during those tumultuous times of the Salem Witch Trials. The entire production was clean, concise, and well put together, while also giving viewers plenty of food for thought as to how the human psyche works, and how easily we can destroy life rather than value it.

The Crucible runs at the Playcrafters Barn Theatre (4950 35th Avenue, Moline) through March 17, and more information and tickets are available by calling (309)762-0330 or visiting Playcrafters.com.