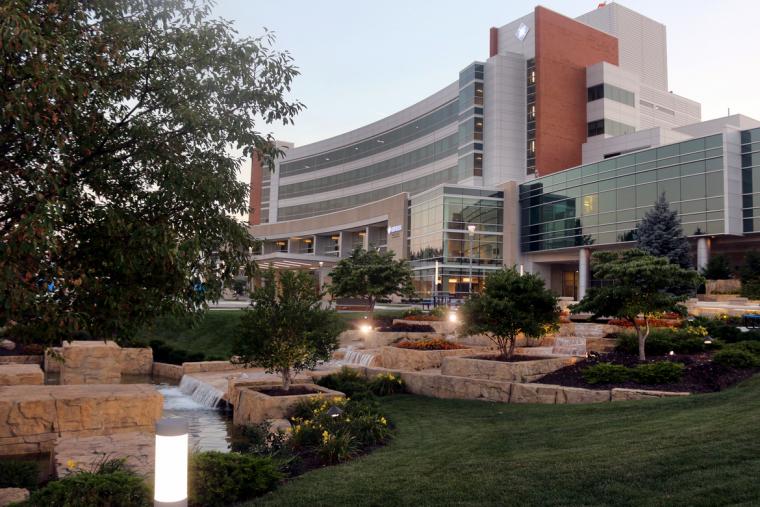 During the First World War, construction began on St. Luke’s Hospital at 1227 East Rusholme Street in Davenport. The hospital has been renovated several times in the intervening century, but never as impressively as the $150 million renovation and construction project – the largest in Quad Cities history when it was announced in 2013 – that has been recently completed. The hospital, renamed Genesis Medical Center, is at the center of a beautiful campus that also includes the Genesis Heart Institute and medical office buildings.

At the hospital’s main entrance is Tempest Ballet, a stainless-steel sculpture that spirals upward. Nearly 10 feet in height, the sculpture was created by Amie Jacobsen, a remarkably multi-faceted artist and designer who lives in Kansas City. Jacobsen earned her MFA in illustration at the Savannah College of Art and Design, where she also taught in the foundations, illustration, and e-learning departments. Her current work includes metal sculptures, artisan furniture, décor, and painting.

Jacobsen wrote that the sculpture’s title was “inspired by the form itself. I thought it reminded me of the wind swirling, like in a storm, which is where 'tempest' came from. But it's also graceful and coordinated, like a dance.” 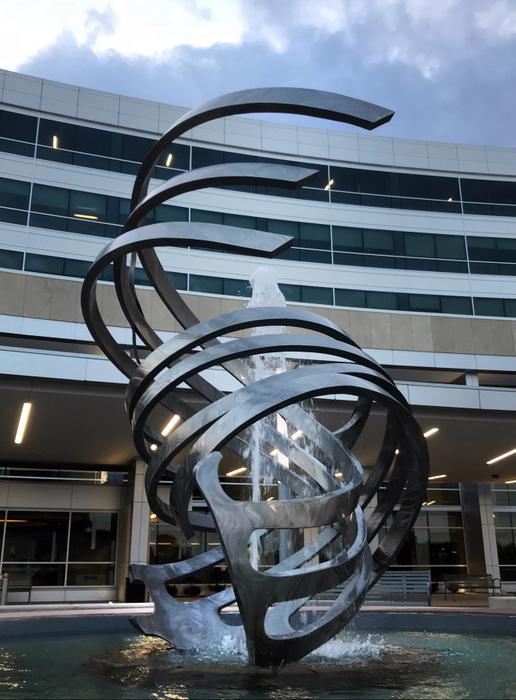 The sculpture’s design included the jet of water that sprays upward through its center. She also wrote that “the water adds movement to the piece, and also enhance the shiny, glittery quality. I choose the center of the fountain because the piece was designed to swirl around it.”

To the north of the main entrance is a waterfall. The water begins overhead from twin sources in a stone formation, flows under a walkway, cascades down a waterfall, descends over stone slabs and passes through massive blocks of stone before gently pooling at the bottom. The water descends about a dozen feet as its travels the fountain’s 100-foot length. Surrounding the stone fountain are landscaped beds of flowers and plants.

Leo Bressanelli, first president and CEO of the Genesis Health System, wrote that the waterfall enhances the beauty of the campus. It is “sensitive to the “neighborhood” nature of our location” yet also complements a very modern facility design.

Bressanelli also felt that the fountain is a pleasant gathering place for patients, visitors, and staff. It provides a respite from the somewhat sterile and technology laden environs of the medical center. 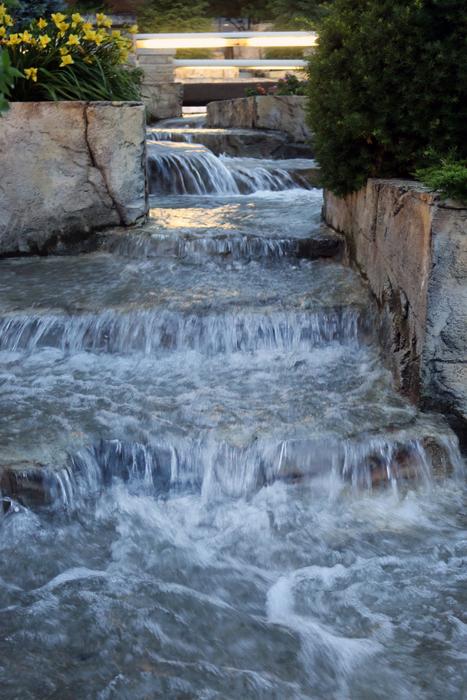 Water is the central force in Tempest Ballet and the waterfall. In this sense, each is a fountain. Yet they create different impressions. Tempest Ballet’s bands of stainless steel seem to spin upward, protecting its central jet of water. The water is its life-force, its core of energy.

Conversely, the waterfall expresses a sense of journey – perhaps an idealization of life. The water passes from its fountain head, over waterfalls, through massive stones and into a gentle pools – allegorical to childhood, youth, adulthood and old age. Unseen, the water is cycled back to the fountain’s head.