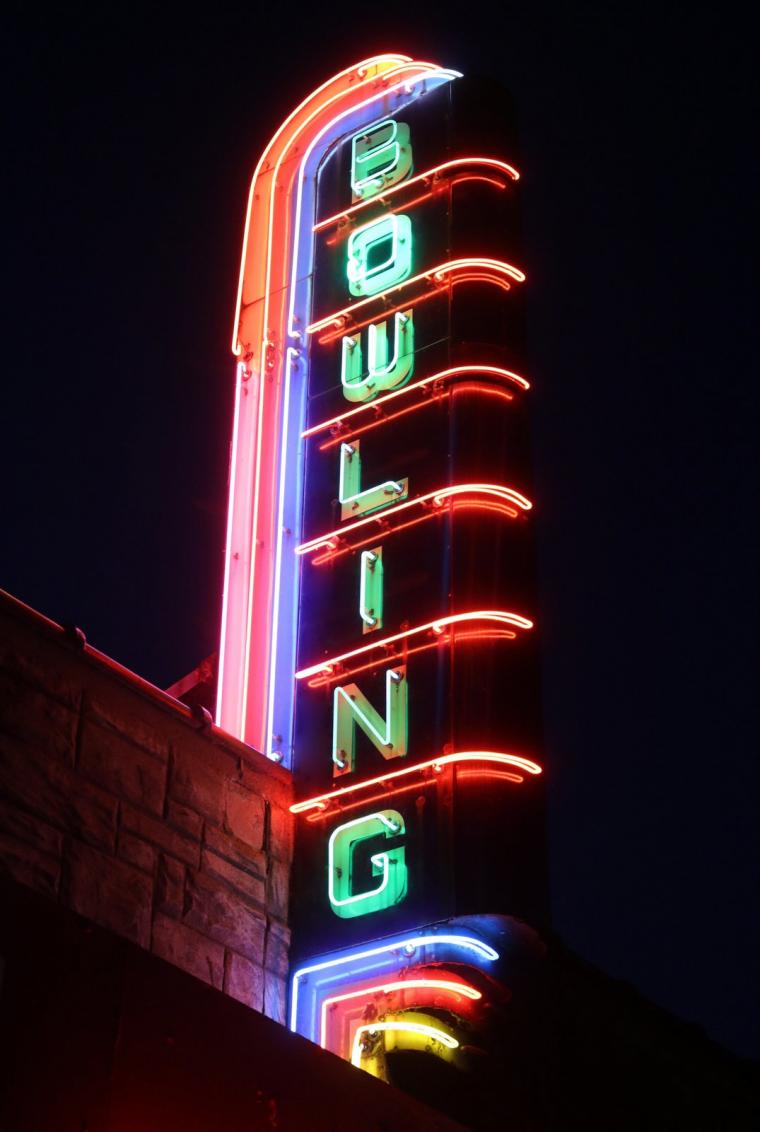 The neon sign at Bowlmor. Photo by Bruce Walters.

The 76-year-old “BOWLING” sign that rises vertically over the entrance to Bowlmor Lanes at 2953 Brady Street in Davenport is the area’s most striking example of an Art Deco neon sign. Its curved, streamlined shape, receding stepped base, and sans-serif letters are characteristically Modern.

The sign dates back to 1940 – before America entered World War II – when the bowling alley first opened. Bowlmor was billed as “Iowa’s Bowling Palace” – the largest bowling alley between Chicago and Denver (a 1,000-mile journey on Route 6, which passes through Davenport). The sign exudes this confidence. 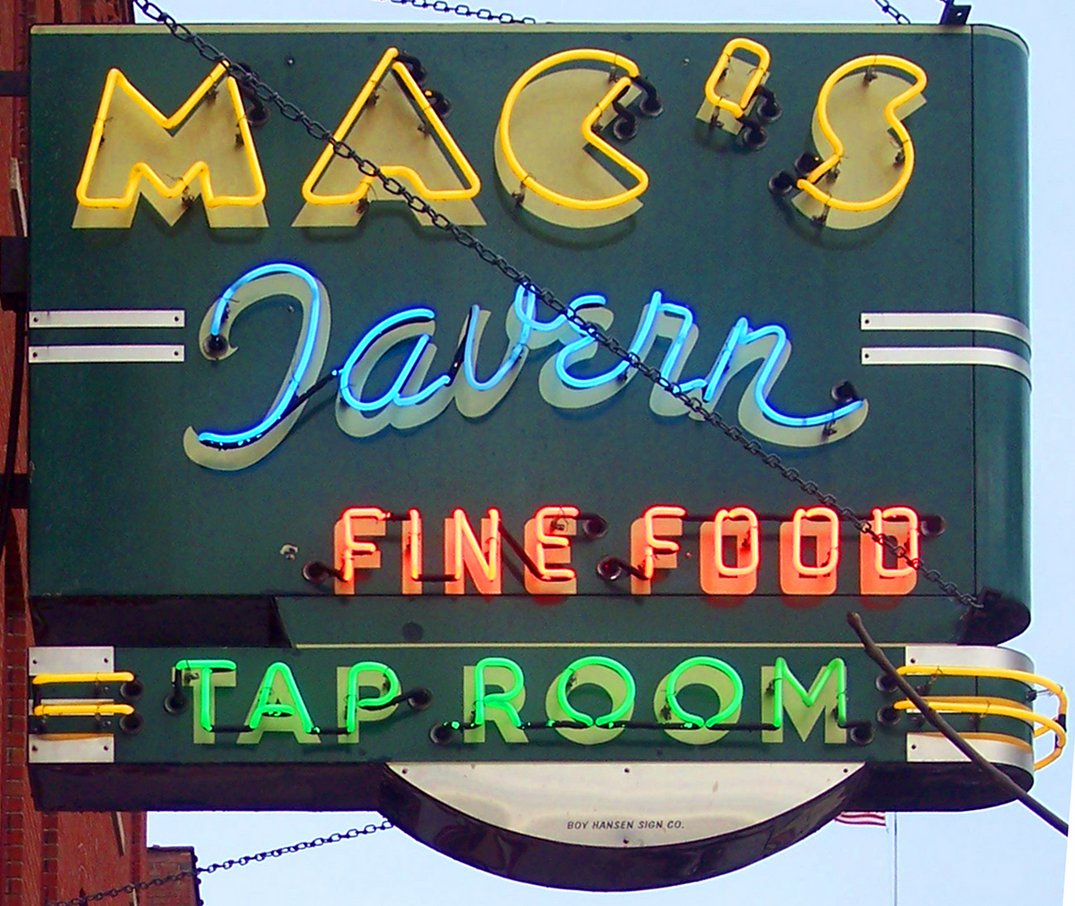 Other iconic neon signs include those at Lagomarcino’s (1422 Fifth Avenue in Moline) and Mac’s Tavern (316 West Third Street in Davenport). They are not as flamboyant as Bowlmor’s, but that is not their visual message; their smaller size and more-modest designs give them a neighborhood feel.

The Harris Pizza sign at 1601 West Third Street in Davenport has a tilted, angular Mid-Century Modern sensibility. It is delightfully enhanced by flashing lights within a bright-yellow arrow. 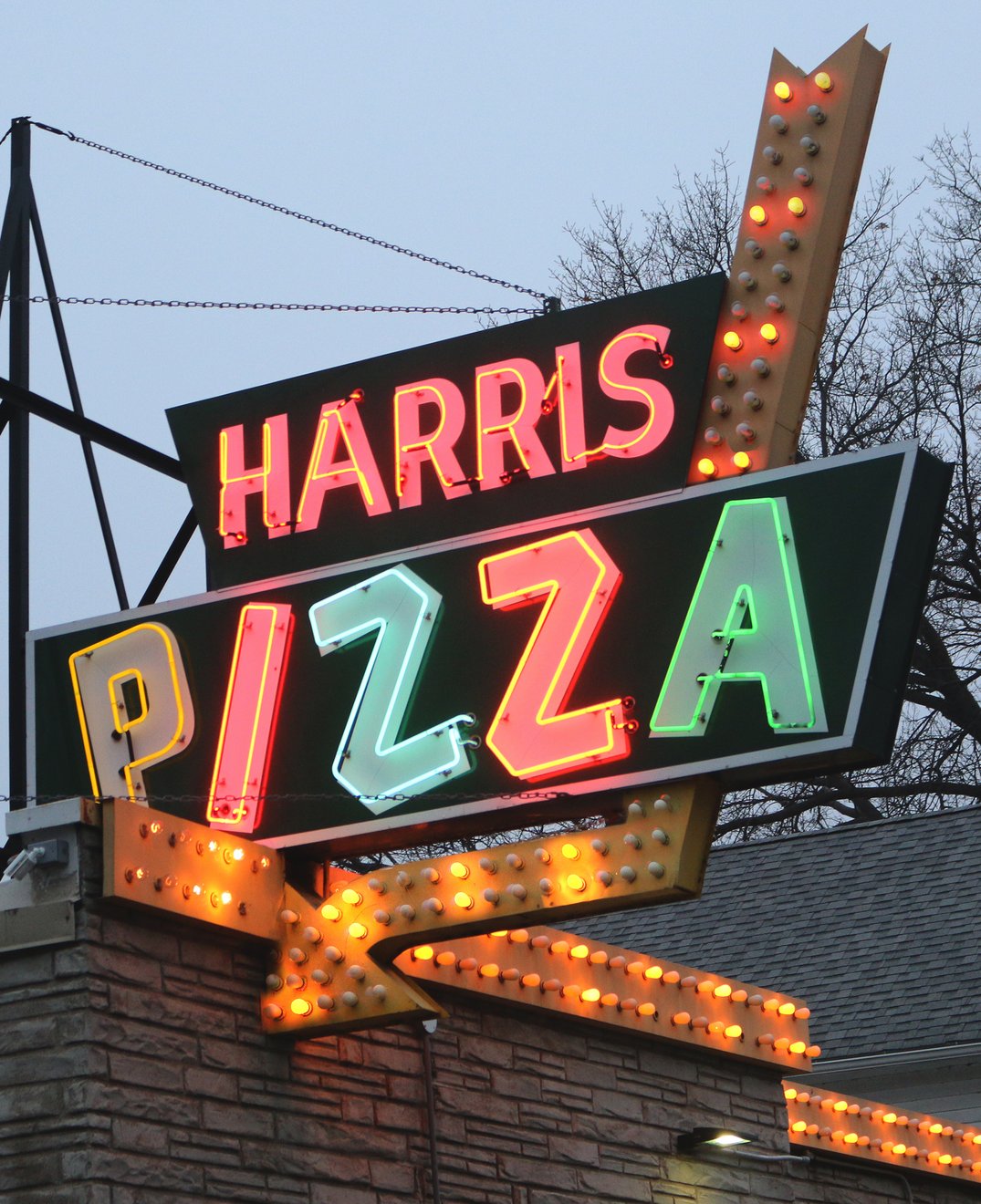 While these signs are characteristically urban, the neon lighting across the ceiling of the bus-terminal lobby at the Charles J. Wright Ground Transportation Center taps into the romance of the highway – another association with neon signs. The artwork, created by Stephen Antonakos in 1985, is composed of long, gentle, arcing neon tubes that call to mind red taillights at night.

Neon lighting was first demonstrated in public by its inventor, Georges Claude, at the Paris Motor Show in 1910. Neon signs, however, weren’t introduced to America until after World War I. The brilliant red light fascinated the public and was dubbed “liquid fire.” It quickly caught on in outdoor advertising and signage. The timing of its introduction perfectly fit the youthful spirit of the Roaring ’20s, which embraced the new.

Neon gas itself only gives off a red-orange light. Other gases and chemicals were soon used to produce additional colors: Hydrogen produces red, helium yellow, carbon dioxide white, and mercury blue. Since the development of phosphors for color televisions in the 1950s, more than 100 new colors for neon-tube lighting have been developed.

Although neon signs can last for decades, their numbers began to fall with the advent of less-expensive fluorescent lighting. This has only accelerated with the introduction of and continuing improvements in new materials, digital technologies, and LED lighting.

Neon lighting, however, has an aesthetic that perhaps is only now being fully appreciated, as we become more aware of its disappearance. Enjoy these broad-shouldered American poems written in glass and steel while they are still vibrant pieces in the open-air museum of our community.