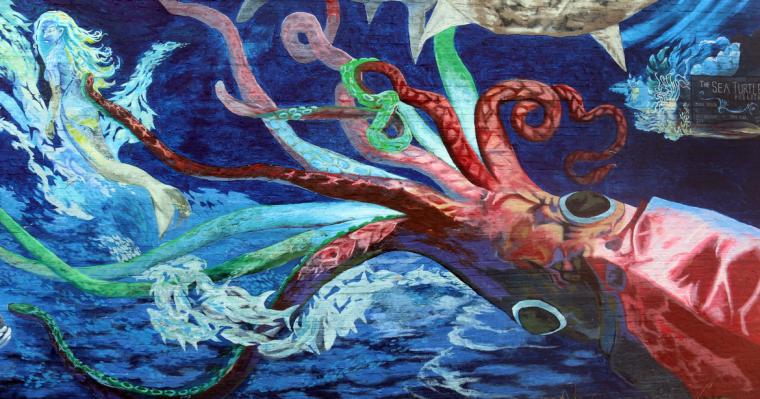 “It was so hot,” says Heidi Sallows. “I remember I filled a small tub full of water. Laughing, we took turns getting in it like a tiny squatting pool. And then we would climb back up and paint in the heat.

“I was painting low and she was standing on a ladder on the scissor lift painting more than 35 feet in the air. It was scary at first and it was a lot of fun by the end.”

Ten years have passed. Yet the Sea Turtle mural is still as vibrant and alive as Sallows remembers painting it with Sarah Robb.

Painted on the east wall of the building at 2104 Fourth Avenue in Rock Island, the mural jolts us out of our familiar world – plunging us into an underwater world populated with beautiful, mysterious, mythical, and dangerous creatures. 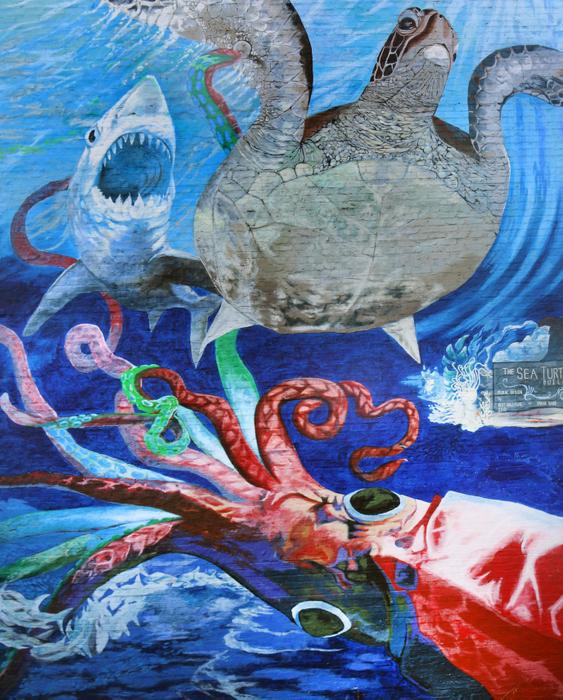 The mural was one of her favorite projects working with Robb. “I brought her in on the project because of the size and the amount of time we had to get it done. I felt that her style and my style, though very different, lent themselves to one another very nicely. She painted with bold colors and could cover areas quickly and I could come back in and sweep in details with yes a very painterly style.”

On the 1800 block of Bettendorf's Lincoln Road is a mural painted last year by Heidi Sallows with her team of Metro Arts students. A 177-foot-long mermaid dominates the mural. Like the mermaid who represents the present in the Rock Island painting, she is looking directly at us. There is also danger in this mural: pollution.

As Sallows said, “The mural was designed by the kids, but in many different sections like a puzzle. We wanted to focus on the climate again because it’s important. And the health of our river is important. I literally told the kids that if we paint something beautiful like the mermaid, we can put all this trash around it and relate to culture through garbage. I wanted her to feel like she was moving in and out of the space itself to remind people of the river just a mile away.”

Her concern with the environment and pollution dates back to her involvement with Chad Pregracke’s Living Lands & Waters team, when she painted on his towboat and worked for 12 years on the art auction at his annual Barge Party.

Sallows added, “I guess mostly what I want to say about climate change is that I want people to care. To realize that what we do matters and what we don’t do matters. That small piece of garbage that you throw on the ground goes somewhere.”