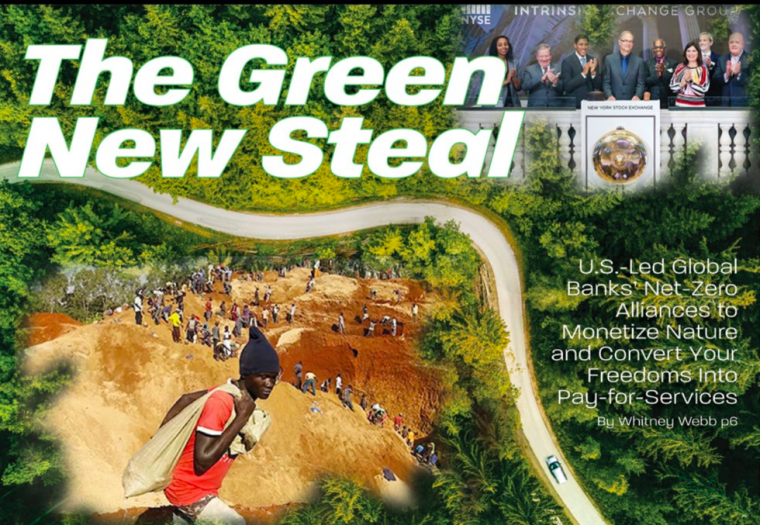 Reader Publisher Todd McGreevy is interviewed by WQUD FM 107.7’s GM Aaron Dali regarding the December print edition, which focuses on the Green New Steal, New Asset Classes and articles by Whitney Webb and James Corbett. Listen to the interview below.

President Joe Biden's signature campaign/policy slogan “Build Back Better” (BBB) is not original to Biden. It is not an ordinary meme; rather, it is a coordinated mantra echoed by leaders worldwide to signal support for the global socioeconomic agenda known as the Great Reset, conjured by the Davos-controlled World Economic Forum (WEF).

"Build Back Better” refers to the official Sendai Framework of disaster recovery that originated during the U.N. World Conference on Disaster Risk Reduction in Sendai, Japan in 2015. Former President Bill Clinton used the term during remarks relative to the 2010 Earthquake in Haiti.

Since then, BBB has also been adopted by Boris Johnson (United Kingdom), Justin Trudeau (Canada), prime ministers in the Netherlands and Australia, the European Commission, United Nations, and architect and author of the book COVID-19: The Great Reset, Klaus Schwab.

The Great Reset can only be accomplished with the enactment of Biden's obscenely expensive and expansive HR 5376 Build Back Better Act that recently passed the U.S. House (220-213) and is now being reviewed in the U.S. Senate. The estimated cost is $3-9 trillion over 10 years, much of it necessarily borrowed. (https://www.congress.gov/bill/117th-congress/house-bill/5376/text)

These massive appropriations are egregiously over-broad, allowing for implementation that tends to overreach agency authorities and invites waste, fraud, and abuse, creating more problems than it solves. Ascertaining what the appropriations can actually be applied to (spent on) is difficult for this reason. It is one more critical area of vigilance and oversight that we Americans have abdicated and must resume if we ever want this out-of-control spending Pandora back in the box.

U.S. taxpayers are funding $550 billion for “green” programs for climate action, clean-energy jobs, and environmental-justice programs, whether domestic or abroad. Appropriations allow the creation of a Civilian Climate Corps producing millions of good jobs (whose mission and relative tasks are unstated), environmental justice priorities such as resilient and energy-efficient housing, Environmental and Climate Justice Block grants, and community pollution clean-up. Government programs always enlarge bureaucracies via jobs, but the BBB act is better defined as job engorgement. How these jobs will actually contribute to accomplishing a 50-percent reduction of anthropomorphic (man-made) carbon emission is vague at best, nonexistent at worst.

The government will certainly have a role in providing carrots and sticks for green standards that the private sector will have to abide to secure licensing and/or capital because the Great Reset includes a new global financial infrastructure that includes a central digital currency, a consortium of 180 large banks to evaluate commercial loans based on Environmental Social Governance (ESG) scoring, a carbon credit trading apparatus, and a new asset class comprised of nature and its infinite processes. In other words, financial institutions are plotting to monetize nature by either owning it as asset(s) outright, or by purchasing rights to its beneficial uses, for an arguably unlimited profit stream. Ergo the green new steal.

Journalist and podcaster Whitney Webb has authored two incisive and thoroughly researched articles deconstructing the recent iterations rolled out by the United Nations and the Glasgow Financial Alliance for Net Zero that illustrate the Green New Steal in stark order.

Other appropriations in the Build Back Better Act include (1) 87,000 more IRS agents to expand auditing capacity for securing unmet tax obligations from America's employed that includes warrantless access to bank accounts with transactions greater than $28 per day; and (2) an annual reset of asset holdings (stocks, real estate, etc) in order to tax the current gains on assets each year rather than waiting to tax the gains at the time of sale. This will be the undoing of family farms, and of lower- and middle-income home ownership, especially for the elderly, due to inability to pay the increased tax burden that will accrue. It will also disincentive traditional investment in home/property ownership by putting it out of reach of younger demographics already struggling with student debt, inflation, and wage stagnation.

WEF's Klaus Schwab assures that, in the Great Reset socioeconomic model, people “will own nothing and be happy,” which suggests these policies are designed to deliberately discourage future property ownership by a super-majority of Americans because property ownership is the centerpiece of our Republic, Bill of Rights, U.S. Constitution, and bedrock laws, which the Great Reset openly admits to dismantling.

The domestic provisions in BBB are the usual: Medicare and Medicaid expansion, prescription drugs cost reduction, vision, dental, childcare, more affordable housing, increases that are always promised but rarely delivered meaningfully beyond the already built-in annual increases in these exact budget items. It is being reported that prescription-drugs cost reduction has already been removed and Medicare expansion will probably be greatly reduced or removed because it is so costly. Paid maternity and sick leave is another carrot to garner support.

That leaves a huge chunk of the bill's trillions for foreign expenditures; massive CDC expansion for health surveillance; cooperation in implementation of global central currency capable of tracking every human transaction; economic development in the form of investment based on ESG scores versus credit scores that rely on traditional economic metrics such as productivity, efficient allocation of resources, etc.; public/private partnerships with Natural Asset Companies (largely funded by deci-billionaires and the two primary asset managers Blackrock and Vanguard, who manage most of the worlds assets already) for resource exploitation, carbon capture and sequester emission reduction projects, carbon credit exchanges for trading carbon credits to offset emissions and continue to pollute, all for exponential profits in developing countries first; worldwide vaccine production and distribution; a machine-to-machine communications apparatus (5G) for collecting, controlling, and monetizing data on human activity; bio-security with bio-integration of biotechnology, for a brand of trans-humanism that is also openly celebrated in detail in WEF Director Klaus Schwab's COVID-19: The Great Reset.

The Great Reset is epically ambitious, soullessly calculated, and most of all, wildly profitable. It will be centrally controlled by the Davos collaborators, most of whom are the world's deci-billionaires and royals and mostly the same players responsible for the wealth theft the occurred in the 2008-2009 financial meltdown thanks to derivatives that only expanded thanks to the bailouts by American taxpayers, along with too-big-to-fail banks that consolidated further and just got bigger.

Blackrock”s Larry Fink was riding the throne as CEO at Goldman Sachs at the time, advising on finances and running the plays for his firm and favored others. He moved on to a less restrained gig at Blackrock, where he was richly rewarded with the keys to the U.S. Treasury and Federal Reserve under Obama, Trump, and now Biden. Blackrock is one of two asset fund managers that own majority interest in most of the Earth's industry leaders and everything in between.

BBB Act would raise the cap on the the State and Local Tax Deduction (SALT), and will benefit higher income earners in those states that collect it by raising the cap from $10,000 to approximately $80,000. This $500 billion tax cut would benefit the 10 percent top earning households (saving as much as approximately $20,000 each), while average median-earning households would save just approximately $25. Also of great financial benefit are the new tax credits and rebates for green projects and subsidized green consumption.

OSHA would receive a significant increase in its budget to enforce vaccine mandates and new green regulations designed to produce revenue streams from fines for violating regulations. The authority for this enforcement is currently nonexistent – therefore, an unprecedented, and more important, unlawful abuse of power at this juncture.

Nor do employers with 100 or more employees, whether private or public sectors, have the authority to mandate vaccines or collect certain health information from employees under robust HIPPA laws. Employers who proceed regardless, acting under an assumed protection of an Executive Order, do so with the very real possibility such unlawful violation of employee rights will result in crushing liability for employers.

In Scott County, the Scott County Board of Supervisors neglected to notify county employees of the federal court's stay on mandated vaccines as a condition of employment until former Supervisor Diane Holst alerted the current Supervisors of their delinquency. Thanks to Holst's tenaciousness, a letter finally went out to employees Tuesday afternoon, December 7, 2021, apprising them of the stay on mandated vaccines.

Scott County employees owe a debt of gratitude to Holst for having their backs even though she no longer serves, as do the five supervisors and county administrators who dodged liability for potentially violating employees' rights. And thanks from all Scott County taxpayers, who ultimately absorb the financial burdens of bad acts by our elected officials and hired bureaucrats. We need a bevy of honey badgers just like Diane Holst to occupy all elected seats if we the people ever expect to be truly represented again regardless of party affiliation, because that dog no longer hunts.