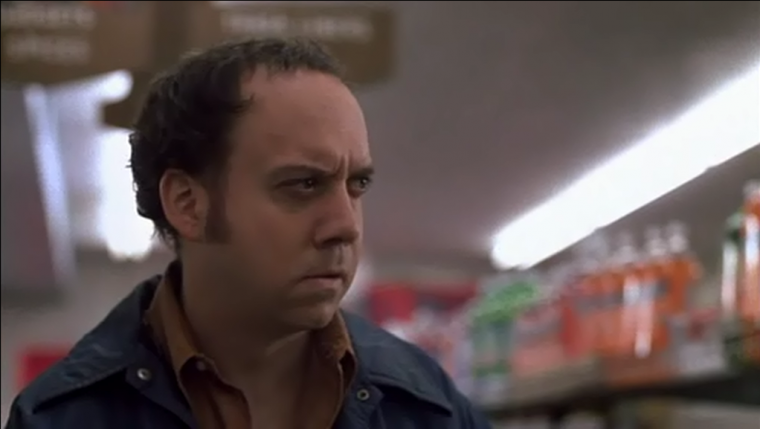 For the past couple of years, as a prelude to the Academy Awards presentation (scheduled to air on ABC at 7 p.m. on Sunday, February 29), I've devoted an article to re-constructing the top six Oscar categories, replacing what I felt were unworthy contenders with my own personal preferences; this enabled me to extoll the virtues of the deserving while also allowing me to whine, "Why the hell didn't Naomi Watts get noticed for Mulholland Dr.?" And before this year's contenders were announced in late January, I was already writing my annual article in my head: "Where's Johnny Depp's nomination? And what about Keisha Castle-Hughes? And how about Marcia Gay Harden and Shohreh Aghdashloo and Fernando Meirelles?" And then what did the Academy go and do? They nominated them all.

Overall, I'm so pleased with this year's crop of nominees that it seems ridiculous to attempt a mass tweaking of the Academy's choices; looking over the 30 contenders in the picture, director, and acting categories - and bearing in mind that I have yet to catch up with In America and 21 Grams - five nominees feel, to me, unworthy of their nods. Instead, let's start from scratch: 2003 featured such a surprisingly wide variety of sterling films and performances that one could conceivably fill a ballot with completely new options and leave film fans more than satisfied.

So, without further ado, the 2003 Alternate Oscar nominees:

Four of this year's five Best Picture nominees - Lost in Translation, Master & Commander: The Far Side of the World, Mystic River, and slam-dunk winner The Lord of the Rings: The Return of the King - showed up on my personal 10-best list this year, so how could I possibly complain? (Well, Seabiscuit's there, too, so the Academy's roster isn't quite perfect.) And I must give the Academy props for ignoring the Oscar-baiting Cold Mountain, which was so nakedly designed as A New Classic for Our Times that I grow to hate it more and more every day. (Seriously. Friends mention the movie to me and I make faces.)

But in this year when the Academy made wonderfully idiosyncratic choices all across the board, wouldn't it have been thrilling if they really shook things up by going for an animated work, an indie that makes Lost in Translation look like Titanic, a documentary, a mock documentary, and a comedic nonfiction with a documentary baked right in? (Hmmm ... I'm sensing a motif among these last three inclusions.) I hereby present you with Finding Nemo, The Station Agent, Capturing the Friedmans, A Mighty Wind, and American Splendor, works that might have lacked the gravitas of what Hollywood considers the best of the best, but which grow more and more marvelous with repeat viewings; I've seen all of them at least three times each, and don't feel like I've even begun to grasp the depths of their greatness.

Sofia Coppola for Lost in Translation. Clint Eastwood for Mystic River. Peter Jackson for The Lord of the Rings: The Return of the King. Fernando Meirelles for City of God. Peter Weir for Master & Commander: The Far Side of the World. A perfectly acceptable group of nominees. Better than that: a brilliant group of nominees. I wouldn't trade a one of them, and wouldn't be disheartened to see any of the four runners-up steal the Oscar away from Peter Jackson, who'll win in a lock.

Yet, with the exception of Meirelles, the nominations for these helmers were to be expected, and where's the fun in that? Allow me to suggest a few out-of-left-field choices, such as Richard Linklater, whose The School of Rock could have been a disastrous, one-note comedy - an ear-splitting Kindergarten Cop - but was presented with such perfect pitch and surprising respect that it easily ranks alongside such splendid Linklater works as Dazed & Confused and Before Sunrise. Or Andrew Jarecki, who created both an endlessly fascinating mystery and one of the saddest portrayals of family dysfunction ever seen onscreen. Or that mad satirist Christopher Guest, the most singular voice in American comedy to arrive since the heyday of Mel Brooks and Woody Allen. And in this year when Sofia Coppola became only the third woman nominated for Best Director, wouldn't it have been great to bump the tally up to five, by including the passionate, deeply felt humanity of Niki Caro and the intricate melding of genres of Shari Springer Bergman (working with husband Robert Pulcini)?

I'm aching to catch the work of nominees Samantha Morton in In America and Naomi Watts in 21 Grams - her nomination is a couple years late, but whatever ... - but I have absolutely no quibbles with the inclusion of Whale Rider's Keisha Castle-Hughes, Something's Gotta Give's Diane Keaton, or Monster's Charlize Theron. Assuming that Morton and Watts deliver the work we'd expect from these marvelous performers, this looks to be one of the finest Best Actress lineups we've had in years, though pity any of the nominees who thinks they can overcome the Charlize Theron juggernaut and land an eventual win.

Scarlett Johansson wouldn't have toppled Theron, either, but she sure should have had the chance to try; her beautifully realized, heartbreaking work probably missed the cut because voters were split between opting for her in this category, where she belonged, or in the Best Supporting Actress field, which is where her studio was assuming she'd land. Fellow teen Evan Rachel Wood was also unjustly overlooked for her fierce performance (and with 13-year-old Castle-Hughes' nod, you can't say that youth was Johansson's or Wood's hindrance), but there were so many fine portrayals by actresses this year - including Jennifer Connelly's wounded alcoholic, Jamie Lee Curtis's hysterically frazzled mom, and Frances McDormand's fiery, sexually adventurous record producer - that the Best Actress category could easily have been pumped up to include 10 nominees and no one would have bitched.

I'm not sure I understand the Academy's assessment of Jude Law's talents: After ignoring his superior supporting work in Gattaca, A.I.: Artificial Intelligence, and last year's The Road to Perdition, where they gave the nomination to Paul Newman instead, they reward him now for being staggeringly miscast, and close to bloodless, in Cold Mountain. Ah, well. The other four tapped for Best Actor - Johnny Depp for Pirates of the Caribbean: The Curse of the Black Pearl, Ben Kingsley for House of Sand & Fog, Bill Murray for Lost in Translation, and Sean Penn for Mystic River - are all more than worthy inclusions, and the Murray-versus-Penn battle will inarguably make for one of the tightest Oscar races in years. (My guess on the eventual victor? If Penn can get a surprise 1999 nomination for Sweet & Lowdown and a shocking nomination for 2001's I Am Sam - he's obviously a favorite among the actors' branch - they're not going to ignore what may be the finest performance by any actor this year.)

Of all the year's nominations, though, I thought the most heartening was Johnny Depp's, because it hints that the Academy's notorious bias against comedic performances might, finally, be beginning to wane. But Depp's wasn't the only high-comic work that proved to be much, much more; Jack Black's wannabe rocker, Paul Giamatti's grouchy crank, and Billy Bob Thornton's beyond-surly Santa were completely hysterical creations made brilliant by the go-for-broke chutzpah of their stars. Peter Dinklage, who thankfully was nominated for a Screen Actor's Guild Award, pulled off exquisite slow burns and proved himself a true leading man in his film's stellar ensemble. And with Kurt Russell currently performing at peak ability in Miracle, it's worth remembering that, at this time last year, he was blazing across screens as a frighteningly feral cop in Dark Blue. Not that anyone saw it.

This year's Supporting Actress race is unusual in that it's teeming with hard-edged, splendidly nuanced performances that could easily have been overlooked in favor of flashier turns. The recognition for Shohreh Aghdashloo in House of Sand & Fog, Patricia Clarkson in Pieces of April, Marcia Gay Harden in Mystic River, and Holy Hunter in Thirteen is, for anyone in thrall to the art of film acting, nothing short of inspiring; all four actors would easily have made my personal roster. And who's probably gonna wind up getting the Oscar itself? Spunky little Renee Zellweger, for her obvious, and often annoying, hillbilly shtick in Cold Mountain. (I'm a Zellweger fan by nature, but I'm praying, this year, for an upset by Aghdashloo or Clarkson.)

Zellweger aside, subtlety seemed to rule for the great supporting turns by actresses in 2003. I'm thinking of Hope Davis's astringently hilarious spouse in American Splendor, Catherine O'Hara's fading folk artist in A Mighty Wind, and Emma Thompson's devastating sadness in Love Actually, all pitch-perfect renderings of characters more complicated than they might initially appear. Personally, I would've hated to choose between Patricia Clarkson's dying mom in Pieces of April and her coming-back-from-the-dead mom in The Station Agent; I'm thrilled that she didn't end up splitting her own vote. And while I'm admittedly biased toward Stockard Channing because she might be my all-time favorite actress, her brief performance in Woody Allen's Anything Else is blisteringly funny, proof that you don't need more than a few scenes to create an indelible impression.

I certainly hope that 21 Grams' Benicio del Toro and In America's Djimon Hounsou are deserving of their nods, because otherwise this looks to be the weakest category of the bunch. Thankfully, the sure-thing winner in this competition - Tim Robbins for Mystic River - gave one of the year's best performances, and perhaps the best of his career; if Sean Penn is the soul of Eastwood's marvelous drama, Robbins is the heart. But Ken Watanabe, in The Last Samurai, seems to be included merely for being more charismatic than co-star Tom Cruise - he's basically playing a more introspective Mr. Miyagi - and as for The Cooler's Alec Baldwin ... well, the fact that he's not out-and-out terrible in this laughably "gritty" Vegas chamber drama is, I guess, reason enough for accolades.

As most of us do, I wish the Academy had found room for Sean Astin for providing the tear-jerker moment of the film year, and for lending such sweetness and good humor to Peter Jackson's 10-hour-plus opus. By contrast, the most underrated sensational portrayal of the year had to come from Bobby Cannavale, who, like Astin, turned in such an endearing performance that it was bound to be ignored. I also would have been thrilled if the Academy had thought to include Judah Friedlander, a spot-on hoot as Harvey Pekar's nerdish ally, Bill Nighy for his hysterically seedy hard-rocker unhappily selling out, and, in what might be the comic performance of the year, Eugene Levy's spacey folk singer. At least we'll get to see him and O'Hara performing Best Original Song nominee "A Kiss at the End of the Rainbow" at the telecast.

Jeez, the Academy even managed to get that nomination right. Will wonders never cease?