2005 Oscar Nominees - What They Got and Where to Find Them 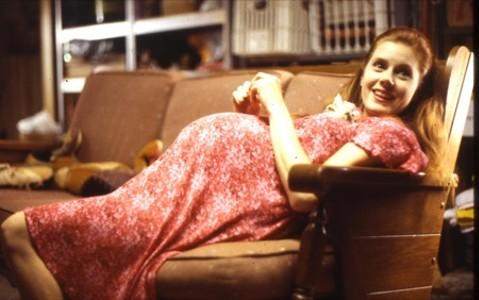 BROKEBACK MOUNTAIN (R) -Here's something that rarely happens: The movie that received the most Oscar nominations - eight in all - actually deserved to receive the most Oscar nominations. Ang Lee's agonizingly fine romantic western makes the mystery and heartache of love come alive in ways you may have forgotten movies were capable of. Nominated for Best Picture, Director, Actor (Heath Ledger), Supporting Actor (Jake Gyllenhaal), Supporting Actress (Michelle Williams), Screenplay Adaptation, Cinematography, and Original Score ... and, to be honest, a few others - Best Film Editing, Art Direction, maybe even Best Supporting Actress for Anne Hathaway - wouldn't have been out of line. (Great Escape Theatre, Showcase 53)

CINDERELLA MAN - A friend asked if Paul Giamatti's Supporting Actor nod was a year-late Academy apology for his being ignored for Sideways. Perhaps. But I'll take it either way - Giamatti and un-nominated star Russell Crowe are the best reasons to see Ron Howard's audience-pandering slugfest. Also nominated for Best Film Editing and Make-Up. (On DVD and video)

THE CONSTANT GARDENER - The temperature on this John LeCarré "thriller" never rises above a simmer, but Oscar-nominated Rachel Weisz, at least, does her best to turn up the heat. Also nominated for Best Screenplay Adaptation, Film Editing, and Original Score. (On DVD and video)

CRASH - Having opened way back in May, I was a little concerned that Paul Haggis' spectacularly vibrant and entertaining race-relations kaleidoscope would get ignored. I probably shouldn't have worried - among the morning's nomination announcements, the news of its Best Picture nod earned the biggest cheers. I was cheering from home, too. The film was also cited for Best Director, Supporting Actor (Matt Dillon), Original Screenplay, Film Editing, and Original Song ("In the Deep"). (On DVD & Video)

A HISTORY OF VIOLENCE - The biggest surprise among the major nods was William Hurt's Supporting Actor inclusion for his insinuatingly evil gangster - Hurt is on screen for less than 10 minutes, and they may be the most hammily enjoyable less-than-10-minutes of the movie year. With the exception of Josh Olson's screenwriting nod, the rest of David Cronenberg's unconvincing thriller was ignored - with just cause. (On DVD and video March 14)

HUSTLE & FLOW - The sensational Terrence Howard earned a well-deserved Best Actor nomination, but I'm almost more jazzed by the film's nod for Best Original Song - who isn't aching, come Oscar night, to watch Tony Bennett and Bjork croon their way through "It's Hard Out Here for a Pimp"? (On DVD and video)

JUNEBUG - "What's Junebug?" some have asked, "and who is Amy Adams?" She's the emotional heart of this unexpectedly trenchant and touching family-reunion comedy, and if enough people see the movie, Best Supporting Actress nominee Adams could be unstoppable on Oscar night. She certainly deserves to be. (On DVD and video)

MRS. HENDERSON PRESENTS - Leading actress Judi Dench got nominated. Of course she did. That's what Judi Dench does. And this weekend we'll discover whether she - and frequently nominated costume designer Sandy Powell - earned their Academy acclaim. (Opens Friday, Showcase 53)

MUNICH - Steven Spielberg's probably not used to playing the underdog, but it was unclear if his crackling thriller would sneak on to the Best Picture short list. It did, and better yet, it deserved to; it's an inspired return to form for its Oscar-nominated director, with additional citations going for Best Screenplay Adaptation, Film Editing, and Original Score for John Williams, earning his 13,574th career nod. Congrats. Again. (Showcase 53)

NORTH COUNTRY - Charlize Theron and Frances McDormand are Best Actress and Supporting Actress nominees for this glib, obvious, remedial sexual-harassment drama. Seems like shamelessly begging for the Academy's love does occasionally pay off. (On DVD and video February 21)

PRIDE & PREJUDICE - Expected nominations were given for the film's art direction, costume design, and original score, but I'm delighted that the Academy thought to include Keira Knightley in the Best Actress race - this is the most radiant and mature performance we've yet seen from her. (Nova 6)

THE SQUID & THE WHALE - An Original Screenplay nod went to Noah Baumbach for his tale of family dysfunction, a witty, piercing, extraordinary piece of work. Or so I'm told. We certainly didn't get it here. (On DVD and video March 21)

SYRIANA - So complex and knottily structured that Stephen Gaghan probably earned an Original Screenplay nod through sheer intimidation. But it's good to finally see supporting actor George Clooney's acting finally receive recognition, not that - as he's doubly nominated for Good Night, & Good Luck., too - there was much chance of him being ignored this year. (Great Escape Theatre, Showcase 53)

TRANSAMERICA - For her acclaimed, gender-switching role, Felicity Huffman earned an expected Best Actress nomination, and Dolly Parton will probably make an Oscar night appearance, singing her nominated song "Travelin' Thru." Any chance the Academy could also get her to sing "It's Hard Out Here for a Pimp"? (Not in local release)

WALK THE LINE-The Acadamy (rightly) opted against a Best Picture nod for this entertaining-but-little-more Johnny Cash bio-pic, but deserved nominations went to lead actors Joaquin Phoenix and Reese Witherspoon, along with nods for the movie's Film Editing, Costume Design, and Sound. A good, but not great, total, perfectly befitting a good, but not great, movie. (Great Escape Theatre, The Rocket Theatre, Showcase 53)