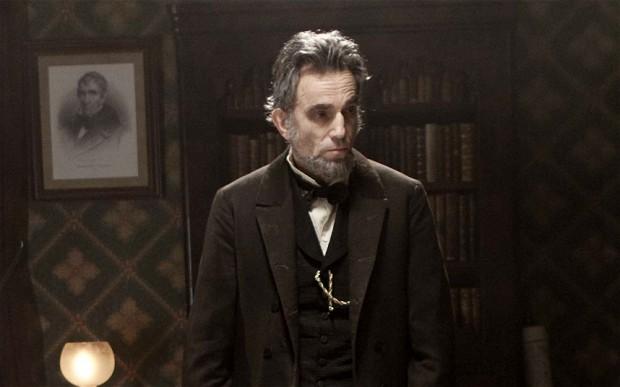 So what did we learn from this morning's announcement of contenders for the 85th Annual Academy Awards?

Well, with a leading 12 nominations under its belt, we learned that Steven Spielberg's Lincoln is clearly the film to beat for the big prize ... unless a small-scale romantic comedy titled Silver Linings Playbook, with eight citations, upsets it. We learned that support for Argo and Zero Dark Thirty might not be as strong as many of us presumed. We learned that voters weren't going to let a little thing like a public dissing get in the way of their lauding one of the year's strongest performances. And we learned that whatever happens with Seth MacFarlane's February 24 hosting of the Oscar ceremony, he should definitely be the first person called to host the Oscar-nomination press conference, particularly if he can again get Emma Stone to host with him.

Rather than the traditional route of having the current president of the Academy of Motion Picture Arts & Sciences name the nominees alongside a recent Oscar winner, this year's early-morning announcement (really early in Hollywood) found Stone and next month's emcee MacFarlane revealing the competitors in 11 of this year's 24 categories. And even before the annual entertainment of "Can you believe they nominated _____?!" and "Can you believe they ignored _____?!" commenced, the pair was making this year's announcement easily the most enjoyable one in all the years of its pre-dawn broadcasts; MacFarlane made breezy jokes about his low recognition factor and resemblance to Donny Osmond, and the coyly grinning Stone didn't argue when her co-presenter, reading the teleprompter, stated, "Some say she's even more talented than Meryl Streep." ("Who says that?" asked MacFarlane, to which Stone replied, "Oh, I dunno ... nobody ... a lot of people ... .") Together, their preamble to the revelation of 2013 nominees proved a delightful warm-up. The nominations themselves, in more than a few cases, proved downright incendiary. They were kicked off, however, with familiarity. Quite literal familiarity, in truth, because it turned out that for the first time ever in an acting race, all five nominees for Best Supporting Actor were previous Oscar winners. ("A breath of fresh air in that category," deadpanned MacFarlane.) But with all of each category's nominees revealed, as MacFarlane explained, "in no particular order" - an extension of last year's decision to have the Best Picture contenders announced out of alphabetical sequence - there were shockers that we didn't realize were shockers until every last nomination in a category was read. Consequently, we didn't know until the full lineups were revealed that The Sessions' John Hawkes had somehow missed the Best Actor roster - with The Master's Joaquin "I'm just saying that I think it's bullshit" Phoenix likely taking his spot - or that Jacki Weaver's lack of Golden Globe and Screen Actors Guild recognition for Silver Linings wouldn't keep her from competing for Best Supporting Actress.

And we really didn't know that there'd be not one but two huge upsets in the Best Director race, with Zero Dark Thirty's Kathryn Bigelow and Argo's Ben Affleck - the latter of whom was looking more and more like the front-runner for the win - denied recognition in favor of underdogs Michael Haneke for Amour and Benh Zeitlin for Beasts of the Southern Wild. (Haneke's Austrian, French-language drama - also a Best Foreign-Language Film nominee - and Zeitlin's micro-budgeted indie both did remarkably well this morning, each nabbing additional nods for Best Picture, Actress, and Screenplay.) The duo's snubs were easily the Oscar stories of the morning, along with the news of Lincoln's massive showing and Silver Linings' larger-than-expected nomination haul; with Weaver, Bradley Cooper, Jennifer Lawrence, and Robert De Niro all in the running, this marks the first time a film has found placement in every acting category since Warren Beatty's Reds in 1982. (Silver Linings helmer David O. Russell, who was denied recognition from the Directors Guild of America two days ago, also scored his second Best Director nod in three years, beating out not only Affleck and Bigelow but possible contenders Tom Hooper and Quentin Tarantino for fellow Best Picture nominees Les Misérables and Django Unchained.) There were surprises aplenty during MacFarlane's and Stone's presentation, from Amour becoming the first foreign-language film since 2000's Crouching Tiger, Hidden Dragon (if you don't count The Artist) to score a Best Picture nod to the realization that the Best Supporting Actress category, like Supporting Actor, was populated entirely with returning nominees, if not returning winners; an all-veteran lineup in an acting race last happened in 1995. (MacFarlane's post-nomination address to the Supporting Actress contenders was another of his finer bits this morning, as he congratulated the nominees with "You no longer have to pretend to be attracted to Harvey Weinstein.") And the surprises continued amongst the categories not read on live television. No recognition for The Master beyond its three stars. No Best Original Song citations for Keith Urban or Dolly Parton or Paul Williams. No mention of The Dark Knight Rises anywhere. (The morning's biggest shock, for my money? My scoring five-for-five in three whole categories, including this year's especially tricky Best Actress contest! You can check out my astonishing precognitive abilities - and embarrassing gaffes - by clicking here, though my correct guesses are also in boldface below.)

So while we wait for February 24 to roll around, a hearty congratulations to the motion-picture academy for making today's announcement totally worth the early rise, and to MacFarlane for not only handling his duties this morning with terrific - and, in regards to the forthcoming ceremony, intensely promising - panache, but for scoring his own nomination as the lyricist for "Everybody Needs a Best Friend," an Original Song nominee from his comedy Ted. Upon the news of his nomination, the clearly touched MacFarlane said, "Wow ... I get to go to the Oscars now!" Yes, he does. I can't wait. Beasts of the Southern Wild - 4

The Hobbit: An Unexpected Journey - 3

How to Survive a Plague - 1

The Pirates! Band of Misfits - 1