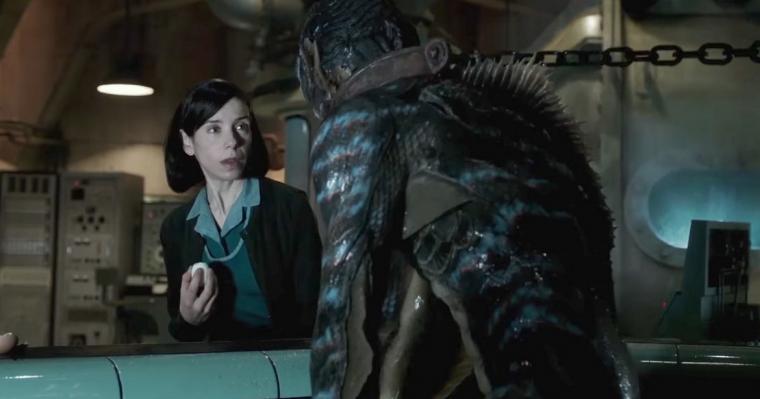 Sally Hawkins and Doug Jones in The Shape of Water

Before getting to my annual exercise in looking foolish (admittedly, one of many), let's preface my Academy Awards guesses with a half-dozen burning questions that I'll pretend I can authoritatively answer:

As a matter of fact, yes! I wouldn't count on it … but yes! As you'll see below, I'm predicting Guillermo del Toro's fairytale romance The Shape of Water for 12. Add Octavia Spencer as a Supporting Actress candidate and you've got 13. (She did get a Golden Globe nomination.) Add the movie's visual effects – which I may be stupidly failing to predict – and you have it tying La La Land, All About Eve, and Titanic with 14. Add a Supporting Actor contender in Michael Shannon, and you've got a new record with 15. Add co-star Michael Stuhlbarg and you've got 16. Add the film's creature-effect makeup and you've got … . Well, actually, the film didn't make the short-list of seven Makeup & Hairstyling options, so I guess we're stuck at 16. That would still be cool!

Could any movie equal, or conceivably top, the record of nine nominations without a corresponding Best Picture nomination, the way Sydney Pollack's They Shoot Horses, Don't They? did way back in 1970?

Wow, you have an excellent grasp of Oscar trivia. And yes! I'm personally predicting Denis Villenueve's sci-fi sequel Blade Runner 2049 in five categories, but could easily see it also being recognized for Film Editing, Original Score, and Adapted Screenplay, with Costume Design and Direction definitely within the film's grasp. Who needs huge box office when you have 10 Oscar nods? Beyond producers and anyone getting a percentage of the profits, I mean … .

Could an acting category see only three movies cited, the way Best Supporting Actor did in 1973 and 1975?

Yes, and without that much difficulty, considering this year's Supporting Actor category features two formidable options from Three Billboards Outside Ebbing, Missouri, two from Call Me by Your Name, and three from The Shape of Water, plus another three or four (admittedly major) longshots from Mudbound.

Could we be in for another year of #OscarsSoWhite in the acting and directing categories?

Sadly: Yup. Director Jordan Peele is hardly a shoo-in for Get Out (genre bias, TV bias, moneymaker bias, Blumhouse bias … maybe some other kind of bias …), and the four actors of color who I'm predicting do make their lineups are in no way done deals. Though heaven knows ultra-longshot Betty Gabriel should be one.

Could recent Hollywood scandals strongly affect what gets nominated?

Perhaps. But given another week of headlines – Oscar voting opened on Friday, January 5, and closed Friday, January 12 – who knows what might've happened? (See Williams, Michelle, and Franco, James, below.)

Could Spielberg's The Post possibly be in for a complete dissing?

Remarkably, yes, even though I'm still predicting it in (a mere) three categories. Blame Trump fatigue. Or Meryl fatigue. Or controversy fatigue. We're a fatigued lot these days.

But it's time to get excited! Here are my official predictions for the 90th (!) Annual Academy Awards, scheduled to be announced on the morning of Tuesday, January 23. Boldface denotes predicted nominees, non-boldface denotes runners-up, predictions are in order of probability, and mild commentary is attached at no extra charge. 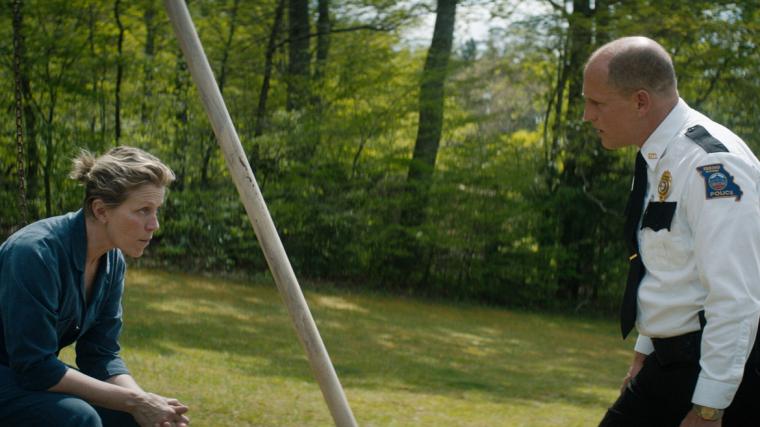 Given the Academy's employment of a specific weighted-ballot system in selecting nominees, the name of the game is number-one votes – as in, who gets the highest percentages of 'em – and this year, I'm thinking seven titles hit the magic number. (Every year since 2012, there's been the possibility of a lineup boasting anywhere between five and 10 Best Picture contenders, though none of those years has featured fewer than eight … or as many as 10.) I wouldn't be shocked to see any of the non-boldface films above adding to that tally, however, and have a sneaking suspicion that the Dunkirk companion piece Darkest Hour may be the one most Oscar prognosticators are underestimating. My 77-year-old dad loved the movie, and he's a decade or two younger than many with Oscar-voting rights.

Jordan Peele, Get Out

Luca Guadagnino, Call Me by Your Name

The names I'm predicting are the same names cited by the Directors Guild of America, and a five-for-five match-up between the DGA and the Oscars rarely happens. (The last time it did was in 2009.) But if one or more of those helmers is bypassed – and everyone but del Toro conceivably could be, even Nolan (again!) – I think the Academy's directors branch will go with a more arty option than Darkest Hour's Joe Wright or The Post's Steven Spielberg; that latter title opened well at the box office this past weekend but seems to have vanished from much of the Oscar conversation. (The movie also went zero-for-five at the Golden Globes, despite the awards-show magnet of Spielberg!Streep!Hanks!) Are people just dreading the speeches if it actually won something?

Michelle Williams, All the Money in the World

This potential lineup feels awfully solid to me. But given the recent, very public brouhaha about the pay disparity between Mark Wahlberg and his film's lead (and everyone else involved) during those All the Money in the World re-shoots, I'm thinking that if the news broke a week or two earlier than it did, Williams might've taken Streep's place on the ballot. Could still happen, too.

And speaking of news not breaking sooner, just how many Oscar voters do you imagine would love to take back their votes after Franco, last week, became the subject of numerous sexual-harassment complaints and found himself awkwardly defending himself on Colbert? (No matter his guilt or innocence, this so not the time for Franco to be walking a red carpet.) Personally, despite the actor's sensational portrayal and many Disaster Artist laurels including his Golden Globe, I have a hunch he'll be left off the ballot regardless due to the film's relative inconsequentiality and the fact that he is, you know, James Franco, the guy who famously left Anne Hathaway out to dry when they co-hosted the 2011 Oscars. But expect a definite outcry if he is cited. And a lot of simmering resentment on the parts of Gyllenhaal, Hanks, and whichever boldface actor he replaces. 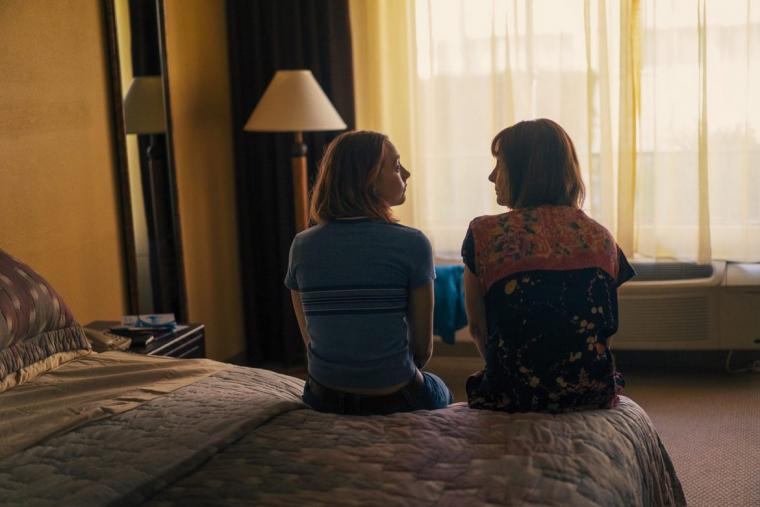 The boldface names compose the same lineup selected by the Screen Actors Guild – last year, SAG matched the Oscars perfectly for Supporting Actress – and it's certainly a damned strong one. But I dunno. Chau is phenomenal, but did enough voters see, or at all like, Downsizing? Blige is great, but do voters want to acknowledge that Netflix movies count as movies? This category feels ripe for a surprise, and one even bigger than Manville or Thomas would be. Tiffany Haddish for Girls Trip? Catherine Keener for Get Out? Betty Gabriel – pleasepleaseplease – for Get Out?

Armie Hammer, Call Me by Your Name

Michael Stuhlbarg, Call Me by Your Name

Ever since 1992, the Academy has shown a unique disinterest in citing the same movie twice (or, as it did with the first two Godfathers, thrice) in this category, which is the main reason I'm not going with Harrelson for Three Billboards or Stuhlbarg for Call Me – or, for that matter, Stuhlbarg and/or Michael Shannon for The Shape of Water. But as with Supporting Actress, there are plenty of options for outside-the-box thinking, and while my passion vote would go to Letts, I'd also be happy with Ray Romano for The Big Sick, or SAG nominee Steve Carell for Battle of the Sexes, or Patrick Stewart for Logan, or Bradley Whitford for Get Out,  or Jason Mitchell or Garrett Hedlund or Jonathan Banks for Mudbound… . Good year, 2017. In some ways, I mean.

I wouldn't be surprised by the inclusion of any of the non-boldface titles, nor all that surprised if slots instead went to Darkest Hour, The Florida Project, or even the largely dialogue-resistant Dunkirk. (Nolan's story structure alone is worthy of a trophy.) But in an exceptional year for original screenplays, my chosen five feel like mighty secure bets.

All the Money in the World

And all secure bets are officially off! Truth be told, Call Me by Your Name is the only title I'm 100-percent about, and even that's only because this gay love story – hardly the Academy's favorite genre – was written by costume-drama legend James Ivory, still Oscar-less after A Room with a View, Howards End, The Remains of the Day, and 89 years of life on the planet. Let's call him a sure thing, Mudbound a pretty-sure thing (Netflix), Molly's Game a semi-sure thing (screenwriter Aaron Sorkin was ignored for Steve Jobs, A Few Good Men, The American President, Charlie Wilson's War …), Victoria & Abdul a maybe (that movie's all about Judi), and Wonder a perhaps (family movie … despite being an awesome family movie). As for Disaster Artist, ya know … . Franco. 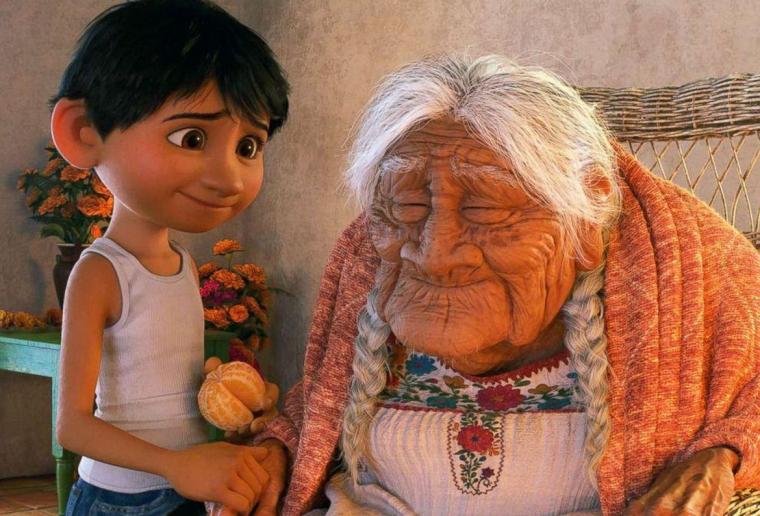 As for the rest, in predicted order, and with runners-up and commentary bypassed in the interest of avoiding further inevitable embarrassment … .

In the Fade, Germany

The Greatest Showman, “This Is Me”

Call Me by Your Name, “Mystery of Love”