All the Screen's a Stage: Five Phenomenal Theatre-to-Film Transfers 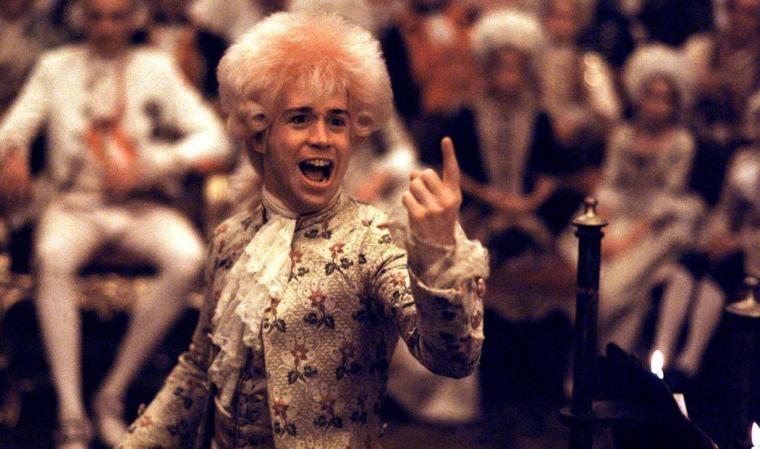 If you can't wait that long, however, there are a number of equally watchable – and far less embarrassing – stage-to-screen transfers out there vying for your home-viewing attention. You can find my thoughts on a number of them, including such first-rate titles as Fences, Carnage, Wit, and The Normal Heart, in the Reader's newly revamped Movie Review Index. (I'm gonna keep harping on that Web-site feature 'til all of you have read all 3,000-plus entries, so get crackin' – my bosses did it, and so can you!) But the following five, all boasting film scripts by the plays' original authors, are previously unreviewed titles that combine my adoration for cinema and theatre so effectively that they give me the charge of both artistic mediums for the price of one. I restricted my options to movies released in the last 36 years, and if that seems like an odd numeric point from which to jump, it did at least give me the chance to finally talk about … 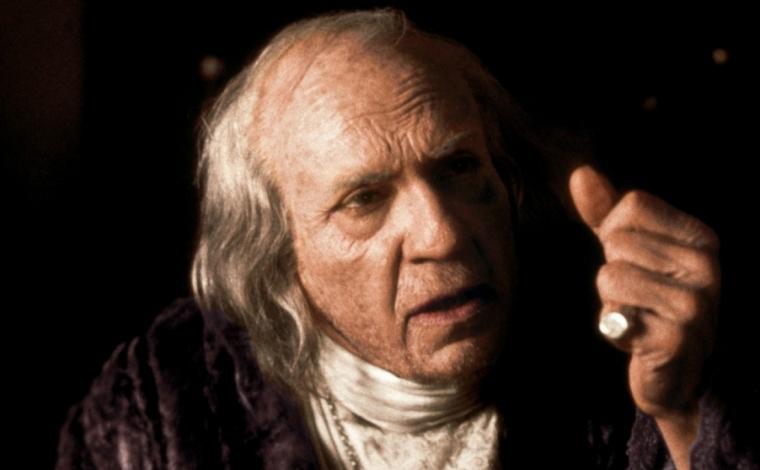 Amadeus: To begin with, some bummer news: If you're a fan of 1984's Oscar-dominating masterpiece about the rivalry between composers Antonio Salieri and Wolfgang Amadeus Mozart and want to see it again, the only rental option currently available appears to be Miloš Forman's “Director's Cut” that adds 20 minutes to the 160-minute running length and isn't helped at all by the additions. If anything, the ultimate power is undermined by the bloat, with formerly sharp scenes now feeling lugubrious and Elizabeth Berridge's role as Mozart's wife more crudely drawn than before. (Her topless scene gave the director's cut its “R” rating, which always struck me as odd considering the “PG” version had frontal male nudity.) Those who've never seen the original, however, won't notice, and only those who have the film practically committed to memory (not that I'm proud of that …) will probably care. Besides, in any presentation, Amadeus is resplendent: an 18th-century period piece that feels as raw, rude, real, and essential as any modern classic. Movies are traditionally poor at demonstrating genius, given that its “process” can't really be captured: Genius just is. But Forman's film, adapted from Peter Shaffer's similar hoarder of Tony Awards, is more shrewdly about the unbearable recognition of genius – a sensation performed to perfection by F. Murray Abraham as his uncomprehending Salieri listens to Tom Hulce's Mozart produce one musical miracle after another. Thrillingly scored, gorgeously designed, and as narratively juicy as a season-long Scandal binge, Amadeus is the only film I've ever seen while sitting on the cineplex floor; in one of my many viewings as a movie-theater usher, I watched it from below the front-row seats during a sold-out 1984 screening. It'd end up killing my back, neck, and ass, but I'd likely do the same thing today. 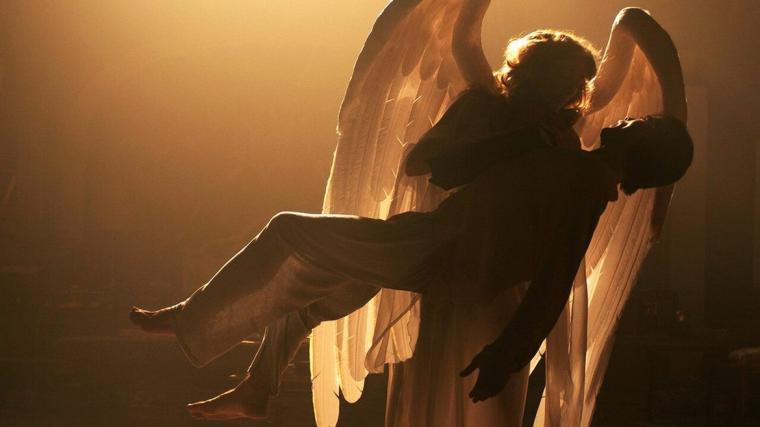 Angels in America: Granted, you may not be in the mood for a movie – or rather, a six-hour HBO mini-series – set during the era of a plague, this particular pandemic being the AIDS crisis that affects every character in Mike Nichols' adaptation of Tony Kushner's iconic Pulitzer Prize winner. And I'll admit that Nichols, for all of his gifts, may have been too naturally earthbound a director to do full justice to Kushner's wildly adventurous examination of mid-to-late-'80s life in New York and in heaven; even the most ethereal, fantastical sequences tend to play like situation comedy, if intensely sophisticated situation comedy. (Kushner's material really screams for a Pedro Almodóvar or a Todd Haynes – someone who could conceivably reproduce the verbal and thematic magic in visual terms.) This Angels in America is the one we got, though, and I ain't tradin' it. If there's any inherent perk to movies made from plays, it's that they all but guarantee the sort of cast that would otherwise never be gathered together for a stage run, and Nichols' ensemble is a doozy: Al Pacino, Meryl Streep, Emma Thompson, Mary-Louise Parker, Justin Kirk, Jeffrey Wright (reprising his Tony-winning Broadway role), Patrick Wilson, and Ben Shenkman, all working at peak ability. But I watched Nichols' 2003 achievement – currently streaming on Prime Video – again not long after our collective shut-in began, and as a work of art, it feels more vital than ever: understandably terrified (and terrifying), emphatically angry, mordantly riotous, ineffably sad, and finally, after all the chaos and pain, deeply hopeful. “This disease,” says Kirk's Prior Walter at the finale, “will be the end of many of us, but not nearly all, and the dead will be commemorated and will struggle on with the living, and we are not going away.” A-effing-men. 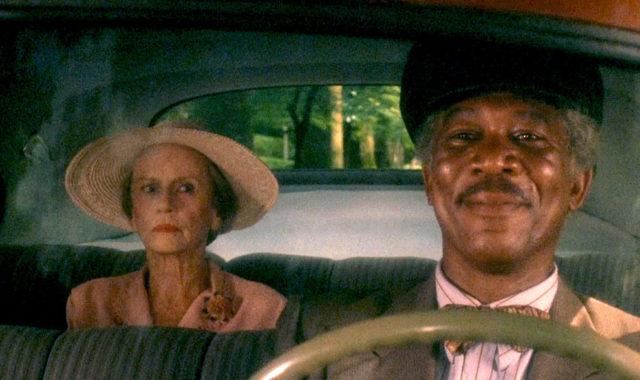 Driving Miss Daisy: I know, I know … it's so uncool to like this movie. The one with the genial, unflappable black man spending a quarter-century chauffeuring the rich, grouchy white lady. The one that requires Morgan Freeman's Hoke Colburn to begin sentences with a servile “Yassum, Miz Daisy.” (That's the spelling in the stage script.) The one that won 1989's Best Picture when Spike Lee's Do the Right Thing wasn't even nominated. But if you've never seen director Bruce Beresford's adaptation of Alfred Uhry's Pulitzer Prize-winner, or haven't seen it in ages, rest assured that Driving Miss Daisy's reputation as basic, feel-good, middlebrow treacle is way off the mark. (It's currently streaming on Netflix.) Not only is Beresford's film version frequently hilarious, especially in the early scenes of Hoke's and Daisy Werthan's platonic courtship, but moments that could've been played for maudlin excess are instead delivered with remarkable tact that borders on astringency. Even Daisy portrayer Jessica Tandy's “You're my best friend” line that reduces you to weepy mush is followed by the sight of our leads holding hands – she sitting, he standing – in a way suggesting that neither is entirely comfortable with the admission. Beresford's staging frequently lands with similarly subtle gut punches: Daisy and Hoke, decades into their acquaintance, eating the same fried-chicken dinner in different rooms; Daisy, aware of the empty chair beside her, attending a Martin Luther King Jr. speech while Hoke listens to it on the car radio. The movie may be genteel, but it isn't sentimental – not about the Jim Crow era or anything else – and as stage-to-film efforts go, the last 40 years have provided few equals. Did it deserve Best Picture over Do the Right Thing? No. Did it deserve it over the titles that were nominated? Absolutely. 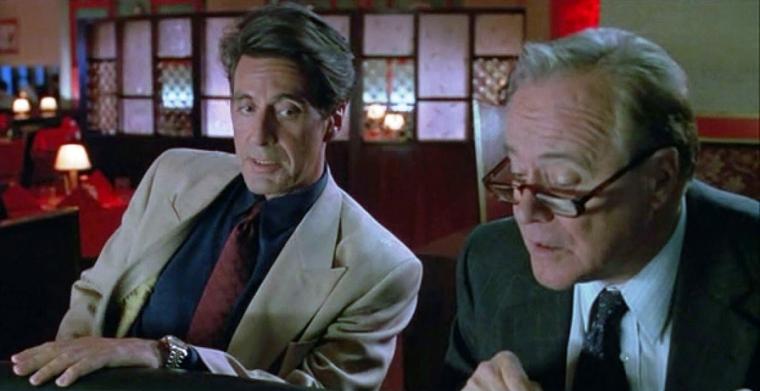 Glengarry Glen Ross: Despite his fame as a theatrical rabble-rouser and his enduring legacy as one of our most important living playwrights, there haven't been many movies adapted from the stage works of David Mamet, and for good reason: Most of those movies – A Life in the Theatre, Oleanna, Edmond – are boring as sin. (While the two adaptations of Mamet's Sexual Perversity in Chicago – re-titled About Last Night in 1986 and 2014 – aren't necessarily dull, they are rom-commed almost beyond recognition.) Film, of course, is a visual medium, and Mamet is talk talk talk, and only on rare occasions have the words that frequently explode with life on stage successfully morphed into anything “cinematic.” But if we were allowed to put only one screen Mamet into a time capsule for future generations, at least we have director James Foley's 1992 Glengarry Glen Ross, the playwright's Pulitzer Prize winner about real-estate con men that's about as exciting, and certainly as entertaining, as talk talk talk ever gets. Foley's adaptation even has a leg up on Mamet's play in one regard, as the stage comedy doesn't include Blake, the head-office hotshot who shows up to verbally demolish the salesmen and allows Alec Baldwin, for 10 unforgettable minutes, to completely steal the picture. (“You see this watch? That watch costs more than your car.”) Yet beyond the Blake show-stopper, everything from Foley's superb pacing to James Newton Howard's cool jazz score to cinematographer Juan Riz Anchia's dramatic color palette combines to suggest the finest possible film version of Mamet's finest, most accessible work, one acted to perfection by Al Pacino, Jack Lemmon, Ed Harris, Alan Arkin, Jonathan Pryce … and Kevin Spacey. Yeah, seeing Glengarry means spending perhaps unwanted time with Kevin Spacey. We're all making sacrifices these days. 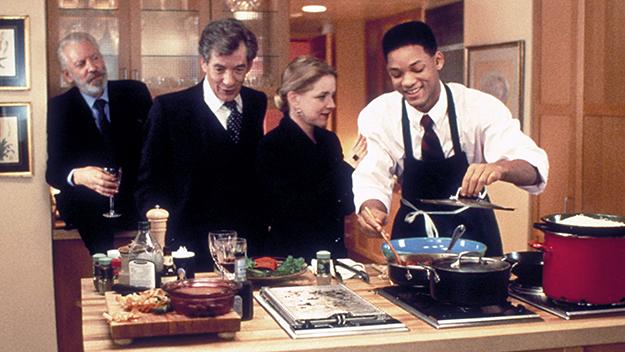 Six Degrees of Separation: If someone held a gun to my head and demanded the name of my favorite living female actor and Laurie Metcalf wasn't an option – an unlikely event, sure, but bear with me … – I'd be hard-pressed to choose between Mary-Louise Parker and Stockard Channing. (I also adore Allison Janney; is it any wonder The West Wing is one of my all-time-favorite shows?) But I think I'd finally lean toward Channing, and director Fred Schepisi's adaptation of John Guare's Tony-winning comedy is the reason. There's a lot to love in this tale of an affluent Manhattan couple who befriends the purported son of Sidney Poitier: Will Smith in one of his first film roles; the ingenious structure that incorporates flashbacks as seamlessly as conversational anecdotes; a top-tier supporting cast boasting Donald Sutherland, Anthony Michael Hall, Mary Beth Hurt, Bruce Davison, Richard Masur, Heather Graham, and Ian McKellen. (This is the 1993 release in which McKellen professes his desire to be in the movie version of Cats … which actually happened 26 years later!) But good God is Channing wonderful here. Reprising her Broadway role as high-society maven Ouisa Kittredge that earned the performer a Tony nomination, Channing also snagged an Oscar nod, and the film remains the purest distillation yet as to why we zealots revere her: the devastating comic timing, the acidic line readings, the strangely tender bluntness, the artful mastery of listening, the down-to-earth regality. (I still swoon every time I see Ouisa decked out in “the blue satin.”) And then, at Six Degress of Separation's finale, she annihilates you with a dinner-party recollection/realization that puts all of the material's blithe, chic humor into new, heartbreaking perspective. Channing never became the feature-film force she should've been. But she's only 76. I'm keeping the hope alive.