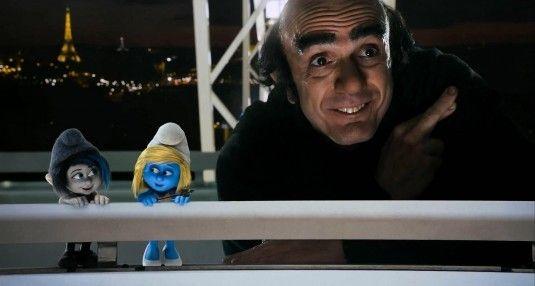 Upon returning from my screening of The Smurfs 2, a buddy asked what I thought of the film, and I told him that Hank Azaria - the comic genius who plays the nefarious, Smurf-loathing wizard Gargamel - was awfully funny in it. My friend asked, "When isn't he?", and beyond the TV-movie tearjerker Tuesdays with Morrie, I couldn't provide an example. (And in truth, at appropriate moments in his Emmy-winning dramatic turn, the actor is awfully funny in Tuesdays with Morrie.) Consequently, as he's nearly always this inspired on-screen, Azaria's hilariously outlandish performance probably isn't reason enough to see director Raja Gosnell's blue-hued sequel, at least if you don't have small children pressuring you to do so.

If, however, you're a childless adult who chooses to attend The Smurfs 2 anyway, your secret's totally safe with me, because Azaria actually does make this kiddie comedy worth sitting through - though perhaps only if you catch it during bargain-matinée hours, or have a cineplex gift card that you were just gonna throw out otherwise.

For viewers over the age of, say, eight, I can't really recommend the film, which is both irritatingly hyperactive and irritatingly maudlin, and which employs a narrative that seems designed to lower expectations right off the bat; Smurfette has been kidnapped, and her best hopes for rescue lie with Papa Smurf and the self-described "B team" of Grouchy, Clumsy, and Vanity. (Given that we might've instead spent time with Panicky, Crazy, and Passive-Aggressive Smurf, this is the trio we're stuck with?) If you saw Gosnell's 2011 The Smurfs - hell, even if you didn't - you can guess the drill from there: wan slapstick, shameless sentiment, Looney Tunes-esque ultra-violence, and the insertion of "Smurf" into what feels like every other word in a script credited to no fewer than five screenwriters. (Although I will extend a miniature "Bravo!" to whoever among them thought to include the line "She's suffering from Smurfholm syndrome" when Smurfette began empathizing with her captors.)

Still, while I was rolling my eyes at much of the movie, I was also practically rolling in the aisles whenever Azaria's bald, buck-toothed Gargamel showed up, delivering hysterically florid outbursts with fearless abandon and tossing off riotous asides with devastating subtlety. ("I remember when my father threw me down a well ... the first time ... .") Azaria is way better than he needs to be here, and so are Neil Patrick Harris and Brendan Gleeson, who almost succeed in making their estranged son/stepfather subplot touching, and Jayma Mays, who offers a brief but deliciously amusing Audrey Hepburn impersonation. For my money, the animated Smurfs - even when voiced by the likes of Katy Perry, John Oliver, and the late, great Jonathan Winters - are pretty boring in The Smurfs 2. Their flesh-and-blood co-stars, however, are great fun, and Azaria, in particular, deserves some sort of prize for enthusiasm above and beyond the call of duty. The performer's early introduction comes via a YouTube clip in which Gargamel's magic wand lifts a taxi hundreds of feet in the air before it comes crashing down on his skull, and we see that the video in question is at a billion hits and counting. Seems about right. Refreshing as it is to encounter a summertime release with the "2" at the beginning of its title rather than its end, I'll admit that I was somewhat dreading the action thriller 2 Guns, if only because its trailers made the film look indistinguishable from any number of generic action thrillers that previously featured Denzel Washington or Mark Wahlberg in starring roles. (Generally speaking, both are a lot more enjoyable in movies that boast no guns.) What I hadn't realized, though, is that director Baltasar Kormákur's outing is also, for much of its length, a comedy, and whenever Washington and Wahlberg are making us laugh here, "generic" is one of the last adjectives you'd apply to the film.

A cheerfully convoluted tale that finds Washington's and Wahlberg's undercover operatives - the former a DEA agent, the latter a Navy intelligence officer - forced to steal $43 million in Mexican-drug-lord money and then forced to steal it again, the movie is ridiculous in a wonderful way; it's like an ammo-laden spin on a traditional, door-slamming sex farce, with craggy Mafia types (including King Craggy himself, Edward James Olmos) in place of blushing ingenues in nighties. But while the endless double-crossing eventually grows a bit tiresome, and the car chases and shoot-outs are standard (if mostly well-choreographed) stuff, 2 Guns is an absolute blast whenever Bill Paxton shows up as a drawling CIA psychopath, and especially whenever its leads are shooting nothing more than the shit. With Wahlberg's motor-mouth babbling away even in the midst of heavy gunfire, and Washington grinning and chuckling at this loquacious goofus with legitimate affection, the duo makes for a fantastically entertaining odd-couple pairing, and their opening scene alone - in which the men squabble over the merits of pumpernickel toast and whether 15 or 30 percent is an appropriate tip - already had me a little antsy for a reunion. Anyone else up for 2 Guns 2?