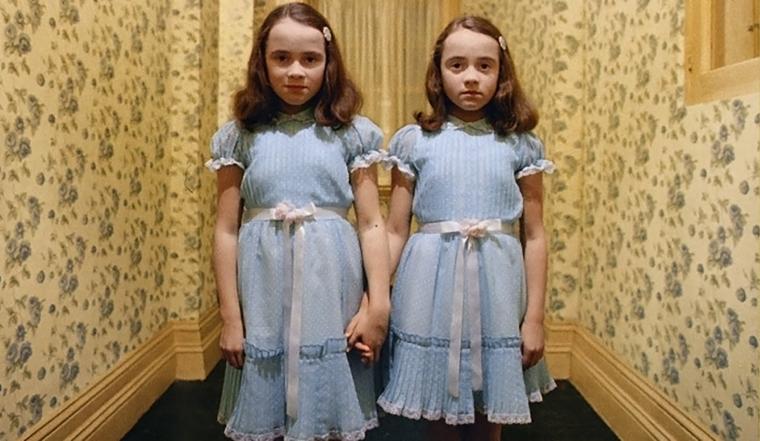 Lisa and Louise Burns in The Shining

This weekend, my favorite five-year-old turns six – an occasion that brings to mind a movie my parents took me to when I was that age. The Towering Inferno.

I have no idea why my folks made me join them for that disaster spectacle when they must've known I'd be happier at home watching, I dunno, Free to Be … You & Me with my grandparents. But off we went to The Towering Inferno, and while I don't remember much of what happened over its two-and-three-quarter hours, I'll never forget the moment one of its characters found herself in an exterior glass elevator surrounded by flames, at which point the elevator floor gave out and she plummeted hundreds of stories to her death.

To this day, 46 years on, I am absolutely terrified of elevators, especially having later been stuck in one as a 13-year-old, at our local mall, for more than 45 minutes. (My family will back me up on this, so please don't make me re-live the experience.) I'm also largely afraid of heights. And fire. And glass-enclosed spaces. And O.J. Simpson. And for all of these phobias, I have The Towering Inferno to thank – a movie I've consequently, steadfastly refused to watch ever since 1974.

I wonder, though, if I would feel that way now, given that several movies that made me practically wet myself as a pre-teen have become some of my favorites as an adult. The following home-viewing options are five such films – works that, for whatever reason, scared the bejeezus out of me as a child and now make me almost nothing but happy. The Towering Inferno ain't among them. Some phobias are eternal. 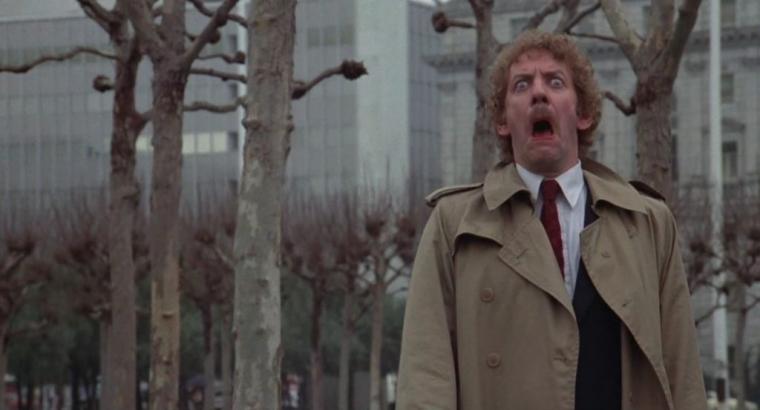 Invasion of the Body Snatchers: When I was 10, my 16-year-old babysitter drove her younger brothers and me to the cineplex for a live-action Disney comedy whose title I've long forgotten. But when we got there, the Disney flick was no longer playing, and the only other option we hadn't already seen was director Philip Kaufman's remake of the 1956 sci-fi classic Invasion of the Body Snatchers. None of us knew the original, but the commercials made this one look creepy and fun, and we were all still on sci-fi highs because of Star Wars and Close Encounters, and it was rated PG, so we figured “Why not?” With four decades of hindsight, I'll tell you why not: because no 10-year-old should view Kaufman's astoundingly disturbing 1978 horror thriller without immediate access to a security blanket, or preferably a child psychologist. Forty-two years later, I adore Kaufman's tale of extra-terrestrial pods taking over San Francisco one zombified soul at a time, and relish its satiric bent, state-of-the-art visuals, and tone of escalating paranoia in a world where you can't tell malevolent aliens from contended Californians who are just really laid back. Poor 10-year-old me, though! The slimy, web-covered pod people! The shrill shrieking of the replicants! The shovel to the face! The woman crumpling to dust! Donald Sutherland in the twist ending to top all twist endings! And maybe worst of all: the chief villain played by Leonard Nimoy! It's bad/awesome enough that Kaufman gave me sleepless nights. Did he have to ruin Star Trek, too?! Single-Most Traumatic Moment: Pretty much the whole last 20 minutes. But for pure nightmarish freakiness – and I've had the nightmares to prove it – nothing beats the queasy, astonishing pod-creature blend of homeless man and dog. I still can't fathom how Kaufman's effects team pulled that off. 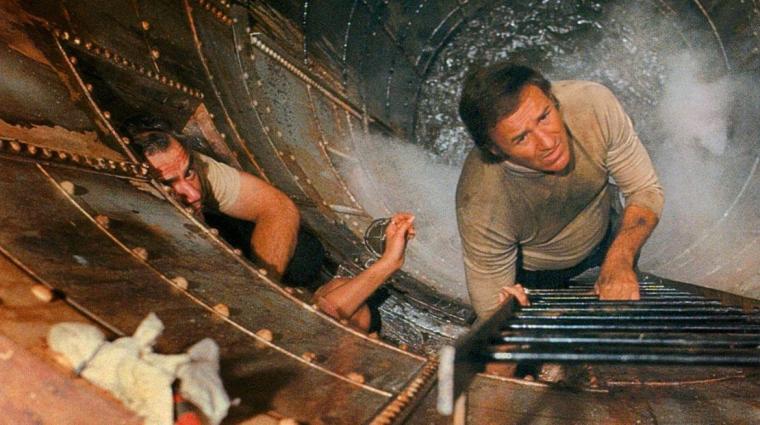 The Poseidon Adventure: Some of you likely remember those pre-cable, pre-home-video days when certain movies – The Wizard of Oz, say, or It's a Wonderful Life – only popped up on TV once a year. Their airings were always capitalized Events, and one of those Events was the yearly New Year's Eve showing of director Ronald Neame's The Poseidon Adventure – an odd tradition, really, considering this disaster epic concerns the aftermath of one of the all-time-worst New Year's Eve parties. Viewed today, this delightfully kitschy 1972 extravaganza from noted kitsch-meister Irwin Allen (the producer responsible for The Towering Inferno) is beyond silly, its tale of a luxury liner that turns upside-down too agreeably laughable to be taken seriously. It was serious as hell, though, to this pre-teen who annually watched it at the home of his parents' friends – a New Year's tradition I might've enjoyed more had I not been petrified of drowning, burning to death, falling to my death, and being stuck in cramped quarters with Ernest Borgnine. What was especially harrowing, at least on a first viewing, was that one of the struggling survivors was a boy roughly my age – someone I recognized from an episode of The Brady Bunch! – who was expected to be as stalwart as Gene Hackman's heroic minister … and look what happened to him. In my youth, I was all but strong-armed into watching this picture. Now I occasionally watch it just for giggles. Never on New Year's, though. That's just perverse. Single-Most Traumatic Moment: There were lots of options when I was eight, yet it's gotta be (Spoiler Alert!) Shelley Winters' death. If the most lovable grandma in the world couldn't survive, what chance did that poor little kid have? (Second Spoiler Alert!: A much-better chance than poor Shelley.) 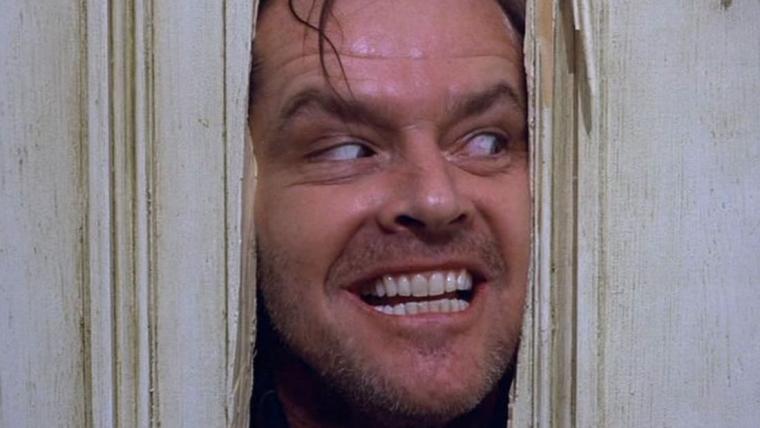 The Shining: I know what you're thinking: “Gee, Mike, you watched Stanley Kubrick's R-rated Stephen King adaptation when you were 12 and found it traumatizing? Well, duh! It's traumatizing for adults, too!” Fine, but hear me out. By the time Kubrick's 1980 masterpiece debuted on HBO the following year, I'd already read the book, as well as Carrie and The Stand and The Dead Zone. (Stephen King was what we junior-high bookworms read in a YA-lit-deprived world.) I had already seen the TV-movie of King's vampire classic 'Salem's Lot and lived to tell about it. I thought I knew what I was getting into. Then again, we all thought we knew what we were getting into, until The Shining's director/co-writer shattered our presumptions by significantly deviating from the novel's haunted-hotel particulars and creating hypnotically unsettling imagery that felt far more the product of Kubrick than King. The author's deceased Grady girls I could handle. Kubrick's, however, with their shocking end-of-the-hallway arrival and symmetrical stances and eerie British sing-song (“Come play with us, Danny … forever … and ever … and ever”), I absolutely could not. It took more than a decade before I could safely return to the film, and once I did, I never looked back; it's hands down my all-time-favorite horror movie. But between its grandly foreboding soundtrack with those rattlesnake music cues, its tracking shots that feel like lulling entryways into madness, Jack Nicholson's ferocity, Shelley Duvall's hysteria, Danny Lloyd's open-mouthed terror, and those unforgettable Kubrickian flourishes – The bleeding elevator! The hedge maze! Scatman Crothers' heartbeat! – the film is no less arresting as a 51-year-old than it was as a 12-year-old. I just pee my pants less now. Single-Most Traumatic Moment: The grotesque, cackling, naked crone slowly advancing on Jack with outstretched arms. Duh! 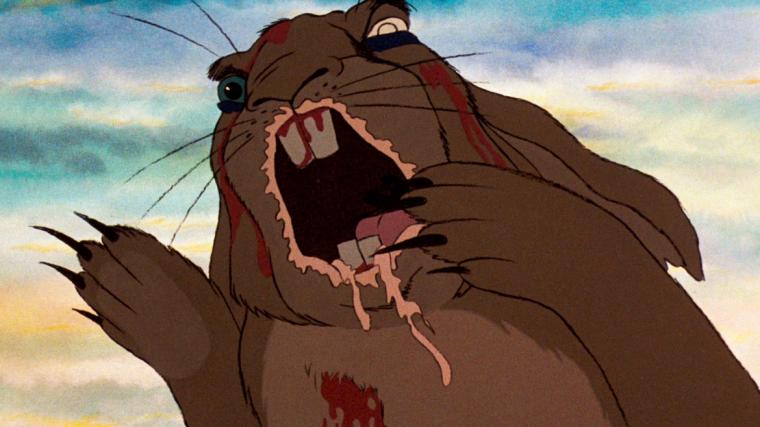 Watership Down: As a precocious (or perhaps merely insufferable) fifth-grader, I was allowed to borrow my teacher's paperback copy of Richard Adams' tale of brave rabbits searching for a new home. I remember feeling very proud of myself as I tore through my first “grown-up book” – 413 pages! Without pictures! – and recall being super-excited when the 1978 movie version landed on HBO in the spring of 1980. But it's one thing to read about rabbits engaging in frequently violent skirmishes. It's quite another to watch them when the skirmishes are as upsettingly violent as they are in director Martin Rosen's Watership Down, which might've been the bloodiest movie, let alone animated movie, I'd yet seen as an 11-year-old. (And I saw The Amityville Horror!) In general, Rosen's film is more pastoral than alarming, and despite the quest's inherent dangers, there's more wonder than panic here; not for nothing is its theme song the wistful Art Garfunkel ballad “Bright Eyes.” (That number, by the way, gets an appropriately hilarious shout-out in Wallace & Gromit: The Curse of the Were-Rabbit.) Yet halfway through this lovely, beautifully voiced hand-drawn work, there's a flashback to developers forcing hares to suffocate to death that's even more unpleasant than that sounds. And then, near the finale, a homicidal warrior rabbit and snarling, enraged dog find their way to our heroes, and … . Well, let's just say that Glenn Close in Fatal Attraction was a more peaceful proponent of bunny love than those four-legged beasts ever are. Single-Most Traumatic Moment: The climactic canine attack is terrifying, and still isn't as horrific as the confronted General Woundwort murdering a resistor by savagely sinking his teeth into the rabbit's skull and leaving him to pathetically bleed out on the ground. By comparison, Glenn Close was freaking merciful. 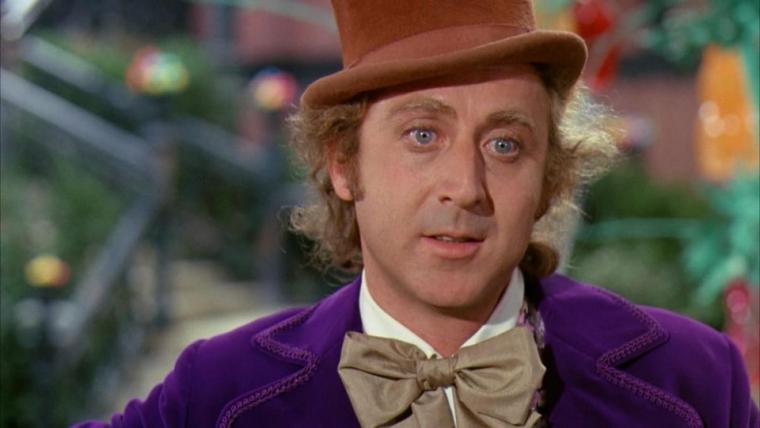 Willy Wonka & the Chocolate Factory: Don't laugh. You know I'm right: This Roald Dahl adaptation is scary as eff the first time you see it as a grade-schooler. It's scary now! All those surprise appearances by the scarred Mr. Slugworth? All those orange-faced Oompa-Loompas? Charlie Bucket attempting to sing?! Scariest of all, maybe, is Wonka himself, who doesn't seem to mind – indeed, who seems to relish – bratty children meeting horrible ends, even if he eventually, blithely reveals that none of them were actually hurt. It sure didn't look that way when Violet Beauregarde was being rolled off as a blueberry and Veruca Salt fell through that trap door, right? For many kids, director Mel Stuart's 1971 family classic is the first movie they'll see that tells them not all adults will act in their best interests – that some adults, in truth, are to be more feared than trusted. Gene Wilder's Wonka portrayal is, of course, legendary, and that's because the actor isn't afraid to look like a monster – someone who'd be perfectly content to let young-'uns die if they ignored his rules. (“Stop. Don't. Come back.”) Willy Wonka & the Chocolate Factory ends with a hug. The 100 minutes beforehand are frequently a candy-coated shiv in the gut. Single-Most Traumatic Moment: I'm temped to choose that trippy boat ride: Does this G-rated movie really show a chicken getting its head chopped off with an ax? Yet the sequence that truly makes me wince finds chubby Augustus Gloop (a) falling in the chocolate river; (b) staying submerged for way too long; and (c) shouting for help while trapped in that pipe leading to the Fudge Room. Drowning, tight spaces, glass-enclosed spaces, the threat of a chocolate enema … . What's not to be frightened of?!