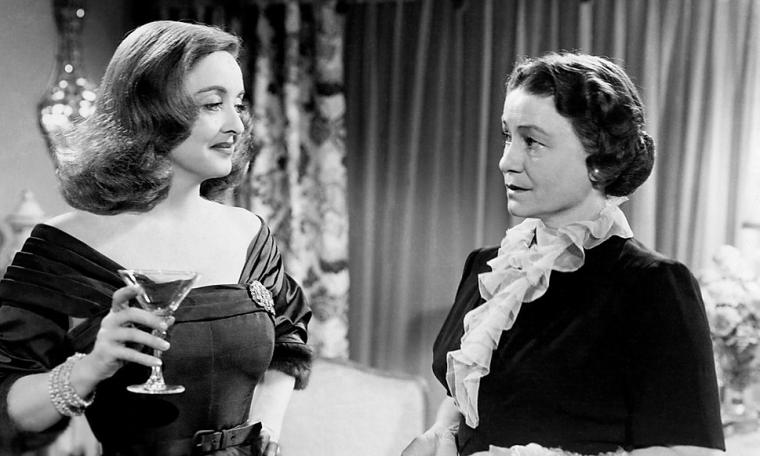 Bette Davis and Thelma Ritter in All About Eve

Ah, the Desert Island. The place where, according to the game, you're only allowed five books, five albums … five whatever for the rest of your life that theoretically reveal, to both you and the people you're playing with, who you really are. In a second-season episode of (the U.S. version of) The Office, a fire in Dunder Mifflin found the employees evacuated from the building and, as a way to pass the time, playing Desert Island Movies in the parking lot. Jim's longtime crush and eventual wife Pam had a top-five list that included Fargo, The Breakfast Club, Dazed & Confused … all excellent choices. Jim's then-girlfriend Katy began her list with Legally Blonde. The poor woman. That relationship was clearly doomed.

So as a getting-to-know-you exercise of my own, I thought it was high time to share my own Desert Island movies: the five titles that, if stranded alone with no other forms of cinematic entertainment, I could happily watch over and over until I eventually perished – or at least until the WiFi disappeared. I'd like to say that several 21st-century titles (Mulholland Dr., The Social Network, Boyhood) would have been considered, as well as a few older ones that I've covered since mid-March (Tootsie, Do the Right Thing, The Breakfast Club … I feel ya, Pam!). But the truth is that I haven't directly written about my quintet of bona-fide favorites until now – and as I saw them all before turning 22, it's been the same list I've had for close to 30 years. Taken together, I truly believe their collective 10-ish hours would make isolated desert-island living bearable. Until, that is, the moment I realized I had no idea how to survive by myself without access to someone who knew how to, you know, find food and stuff.

In ascending order of favorite-ism: 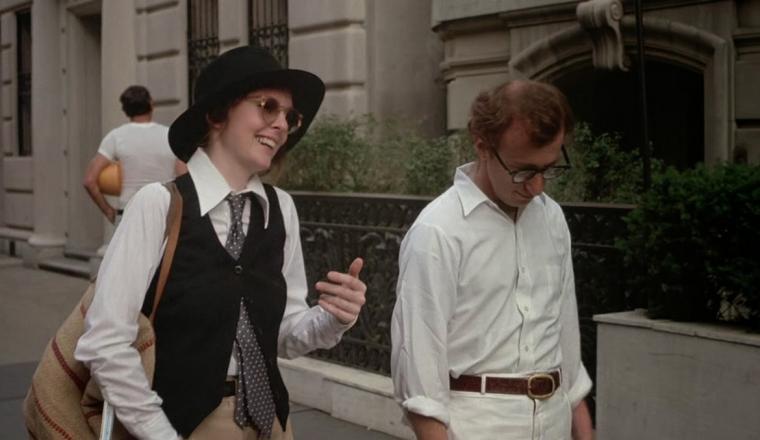 5) Annie Hall: My eighth-grade English teacher Mrs. Baumann reserved one class per week for independent reading, and having been recently introduced to the writer's humor through TV's Sneak Previews, I brought Woody Allen's short-fiction collection Without Feathers to class. I still remember that day, because it was the closest I ever got to getting in trouble at school – not because of my choice of material, but because I was giggling so hard I was distracting others. When class ended, Mrs. Baumann called me to her desk, and I prepared myself for a scolding. Instead, she just smiled and said, “That's a wonderful book. Wait 'til you see Annie Hall.” That was 1982, and I've probably seen Allen's 1977 Best Picture winner 100 times since. I don't know why the man's specific comic voice (neurotic, angst-y, literary, absurd) so spoke to me at age 13. But while I realize I'm one of a rapidly diminishing few who can still watch one of his movies without reflexively flinching, I can't imagine being stuck with only five movies and one of them not being a Woody Allen – particularly this Woody Allen, with its endlessly quotable script, its presentational invention, its mad parade of cameos (Paul Simon! Jeff Goldblum! Sigourney Weaver!), its complex and resonant romance, and Oscar winner Diane Keaton at her most buoyantly, lyrically resplendent. It has so much of everything we fans revere Allen for – the silliness of Sleeper, the punchlines of Love & Death, the poignancy of Radio Days, the contemporary bite of Blue Jasmine – that it's like getting 20 of his films for the price of one. During a post-coital conversation, Allen's Alvy tells Keaton's Annie, “That was the most fun I've ever had without laughing.” Annie Hall is the most fun I've ever had while laughing. 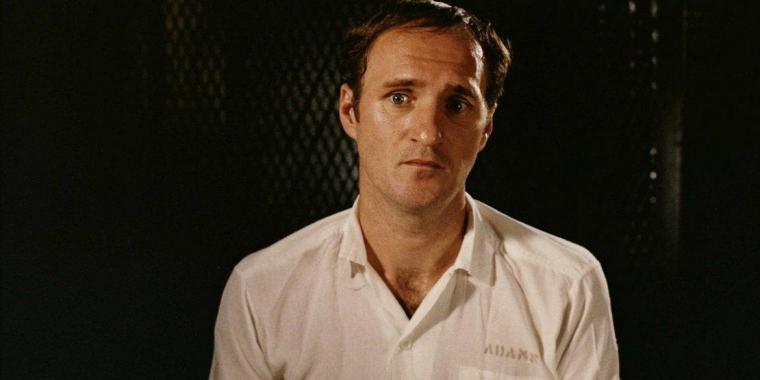 4) The Thin Blue Line: It was mid-afternoon in the fall of 1989, and I had just popped Errol Morris' 1988 documentary about a convicted cop killer into the VCR, and within the film's first minutes, it was already clear that I'd never seen, or heard, anything like it. Part of its revelation, for me, came from its score, given that this was my first exposure to the insistent, repetitive pulse and throb of Philip Glass. The larger part, however, was purely visual, because until The Thin Blue Line, I didn't know a doc could so successfully play as a thriller – and a terrifying, hypnotically arresting thriller at that. Most of Morris' tale unfolds through talking-head interviews with the imprisoned Randall Adams, the baritone-voiced creep David Harris, and more than a dozen investigators, lawyers, shady witnesses, and others recalling their roles in Adams' arrest and trial. Yet what made the documentary so intensely cinematic (and, at the time, controversial) were the staged recreations from the night of officer Robert Wood's 1976 murder and Adams' subsequent interrogation – scenes that played over and over, from different angles and perspectives, through the movie's 100 minutes. Between the nightmarish clarity of the images, the stark dread of Glass' music, and the alternately assured and fuzzy recollections of the “witnesses,” you watched for clues like you watched the Zapruder film of JFK's assassination – and were left with the horrifying realization, one made nearly inarguable in the epilogue, that Adams was innocent (though still incarcerated), and Harris (incarcerated for a different killing) was guilty. When The Thin Blue Line ended, I could barely breathe, and its power hasn't abated over dozens of viewings since – even after the film became primarily responsible for Adams' eventual release from prison. The man finally got justice. We, meanwhile, got a masterpiece. 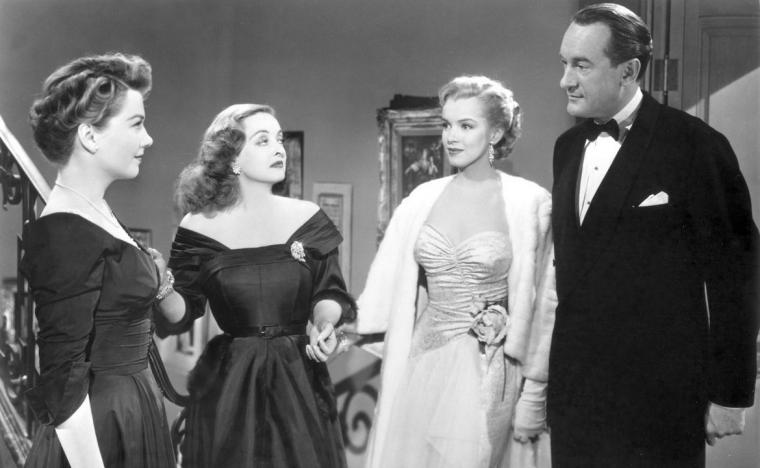 3) All About Eve: “Fasten your seat belts. It's going to be a bumpy night.” As a 21-year-old with a fairly healthy grasp of movie trivia, I was aware of that line as a legendary one for Bette Davis, even if I'd never seen the film in which it originated. But I was on an old-Hollywood kick during my senior year at Augustana College, so a buddy and I finally rented the classic in question: writer/director Joseph L. Mankiewicz's 1950 Best Picture that was famed for earning the most Oscar nominations – 14 – of any movie ever. (It's a record that still holds, though now shared with Titanic and La La Land.) In truth, my friend and I didn't know much about Mankiewicz's film beyond that. So you can imagine our delight when two theatre devotees sat down for a 39-year-old black-and-white melodrama and discovered it wasn't all about Eve – it was all about theatre! And it was so funny! To this day, I'm not sure I've been blindsided by a movie quite like I was watching the incomparable Davis, potential usurper Anne Baxter, and their peerless supporting cast (Celeste Holm, Thelma Ritter, Oscar winner George Sanders) banter, scheme, and expound on the joys of the stage; at the time, it was everything I needed in a movie and never knew I was missing. It's still everything I need in a movie – so witty, so wordy, so ridiculously entertaining that a year hasn't passed over the last 30 in which I haven't watched this acid-dipped love letter at least three or four times. And just when you think you couldn't possibly be having more fun, freaking Marilyn Monroe shows up and promptly steals All About Eve with her breathily dazed readings and killer smile. My seat belt remains forever fastened. 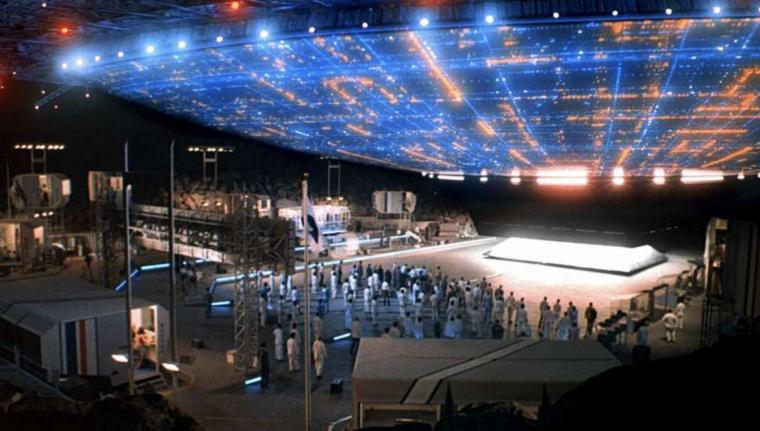 2) Close Encounters of the Third Kind: Considering Star Wars had opened roughly seven months earlier, I'd certainly felt movie excitement before seeing Steven Spielberg's friendly-alien-invasion classic in December of 1977. Before Close Encounters, though, I'd never known true cinematic awe – the kind that leaves you staring at the screen, slack-jawed, with the same hushed reverence of the film's scientists at the finale. Yet I remember feeling awed well before the ginormous UFO began singing and Richard Dreyfuss began laughing and cute little Cary Guffey reunited with his mom. Because while nine-year-old me had seen several “grown-up movies,” I hadn't experienced one that was so unerringly real. The playful squabbling of Dreyfuss' and Teri Garr's kids in their cramped, messy living room; the tension as air-traffic controllers contend with something unexplainable; Melinda Dillon's panic as she chases the glowing, retreating orb that just stole her son; Dreyfuss' television as it blares that Budweiser Clydesdales commercial. (Product placement wasn't yet a thing in 1977, and I can still recall our auditorium erupting in laughter at this too-familiar TV sight.) It all felt absolutely genuine – unlike with Star Wars, you could easily imagine the action unfurling in your own town, or your own home. And so when the dazzling visual effects landed, they, too, seemed wholly believable. More than believable; they seemed true. Like you, probably, I've since seen many Speilbergs, some of them many times over. None of them, however, continue to astound me the way Close Encounters does, and when the mother ship finally makes its delayed arrival hovering behind Devils Tower, damned if the hairs on my arms don't rise every single time. I finally saw Devils Tower in person in 1988, and it was like having an audience with the Creator … or at least the Creator of my lifelong love for movies. 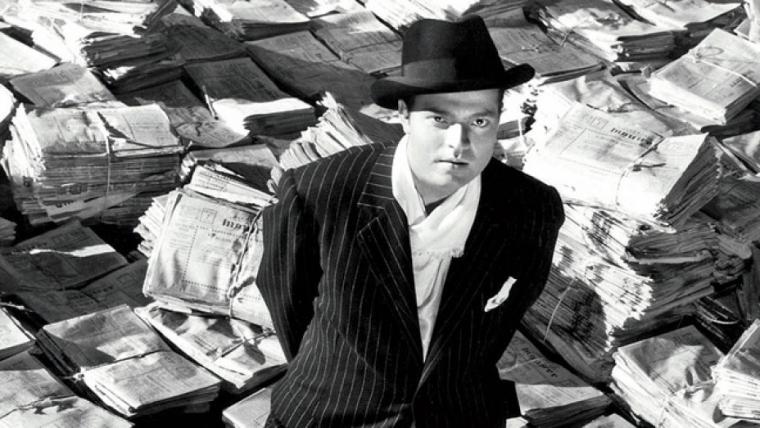 1) Citizen Kane: Does it feel underwhelming to reach the end of this lineup and find a movie widely considered to be one of the greatest, if not the greatest, ever made? Clichéd choice or not, though, if forced to have only one film on my desert island – and hopefully a working device to play it on – it's gotta be this 1941 Orson Welles masterwork whose lofty reputation tends to overshadow it also being one of the most wildly entertaining movies ever made. Like most of its eventual fans, I'd presume, I first saw Welles' debut picture because I had to; it was on the syllabus for my high-school film-history course alongside such other weighty titles as Intolerance, The Gold Rush, and The Graduate. With all due respect to Griffith, Chaplin, and Mrs. Robinson, Citizen Kane was more sublime fun than any of them, and that fun was enhanced by being so surprising: Why hadn't anyone – our parents, maybe? – told us this thing was so funny? Or moving? Or, in its constantly shifting points-of-view, phenomenally clever? Even after umpteen viewings, I'm never completely sure if the next segment is going to be the one with the Kanes' breakfast seating getting further and further apart, or Susan Alexander dejectedly doing jigsaw puzzles, or Jedediah waking from a drunken stupor to witness his editor completing the critic's unfinished theatre review. (A task I've only personally done on three or four occasions. Kidding.) Welles' tragicomic fall from grace, particularly in its director/co-writer's revolutionary approaches to film language and depth-of-focus, is astonishing for its time, of course. It may be even more astonishing for ours: a 79-year-old drama-slash-comedy-slash-mystery-slash-everything more consistently playful and rewarding than perhaps anything else released since 1941. With this film around, solo desert-island living suddenly doesn't sound quite so sucky.