“Documentary Now!” … and Then: Five Excellent Docs and Their Excellent IFC Homages 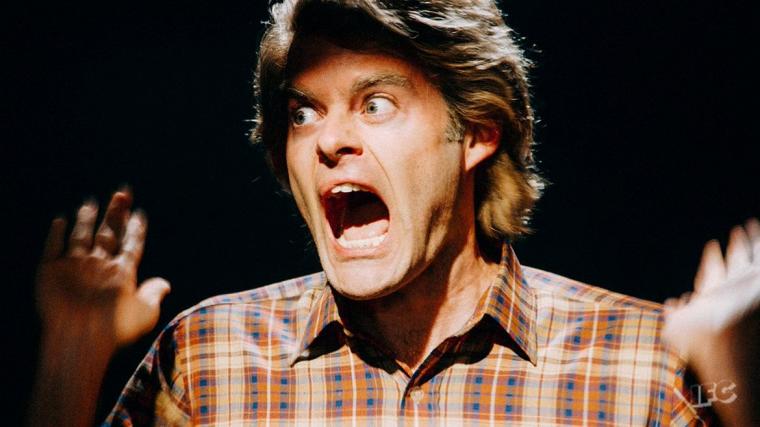 If you're a documentary hound, you're no doubt aware – and are most likely a fan – of the IFC comedy series Documentary Now! Created by a team of wildly funny, intensely knowledgeable talents including Bill Hader, Fred Armisen, and Seth Myers, the show's premise finds each stand-alone episode simultaneously honoring and making glorious comic mincemeat out of a celebrated documentary in the visual style of that documentary … and in a mere 30 minutes (minus commercial breaks), to boot.

Over three seven-episode seasons from 2015 to 2019, and with every mini-mockumentary introduced by an elegant, properly magisterial Helen Mirren, Documentary Now! has paid cheeky yet ruthless homage to genre classics such as Albert and David Maysles' 1969 Salesman and Robert J. Flaherty's 1922 Nanook Revisited; music-themed masterpieces including Jonathan Demme's Stop Making Sense and Bruce Weber's Let's Get Lost; and even cult oddities such as David Gelb's Jiro Dreams of Sushi and Christopher Browne's A League of Ordinary Gentlemen. (That latter title is a 2006 release that's all about professional 10-pin bowlers and it is awesome.) Yet while all 21 episodes to date are worth watching, if some worth less of a look than others, my personal favorites are the ones that satirically annihilate documentaries with which I'm intensely well-acquainted and that I love the most … which should probably go without saying. It's that whole “Nobody picks on my little brother but me!” thing.

Happily, with Documentary Now! currently streaming on Netflix, you're free to find your own favorite episodes at your leisure, and familiarity with their movie inspirations isn't necessary for enjoyment. (While I had never even heard of the 2012 doc Marina Abramović: The Artist Is Present, nor of Abramović herself, that didn't make Cate Blanchett's delirious take on her in Season 3's “Waiting for the Artist” any less hysterical.) But until the show's in-the-works Season 4 debuts, the ones I personally return to most often are the five listed below, all of them based on docs that you should immediately see … if you can find them. (Three are available for a $2.99-3.99 rental through Amazon Prime, one is available on DVD for a selling price of $299.99 – sweet Lord Jesus ... – and one appears to be currently unavailable ... at least through legal means.) 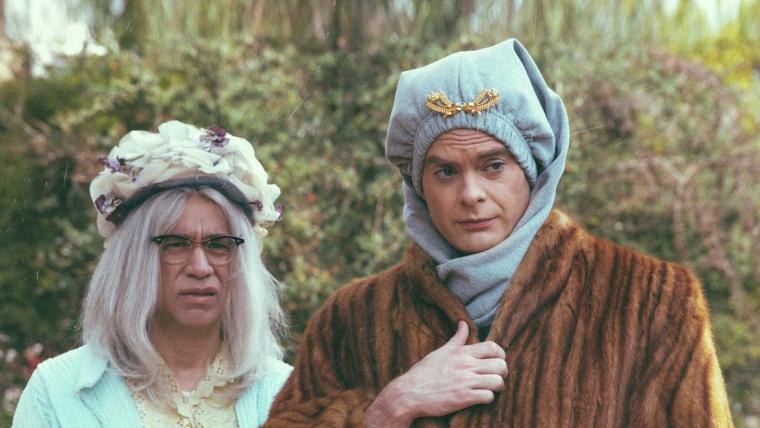 Even in 2015, this debut episode's humor was a bit on the cringe-y side, given that the eccentric Beales were played by Armisen and Hader and not, for instance, Maya Rudolph and Kristen Wiig. (Few longstanding comedic conceits have dated less well than straight men in drag … unless it's Tootsie.) But the stars portray their loveable, unspeakably dressed weirdos with such conviction and sweetness that they totally upend your urge to bitch, and in addition to their thrillingly tetchy banter, the episode completely nails the exhilarating slowness of Grey Gardens, as well as such iconic bits as Little Edie's patriotic dance number and her explanation for her truly unexplainable safety-pinned skirt. Most series pilots are hit-or-miss, and I'm not entirely crazy about this one's descent into full-scale horror-flick terrain, which would've been funnier if it were less overt, and certainly less Blair Witch Project. I'll still always treasure “Sandy Passage” as a hint of greatness-yet-to-come with a lot of bona-fide greatness tucked inside. Bonus points for the cats. So so so many cats. 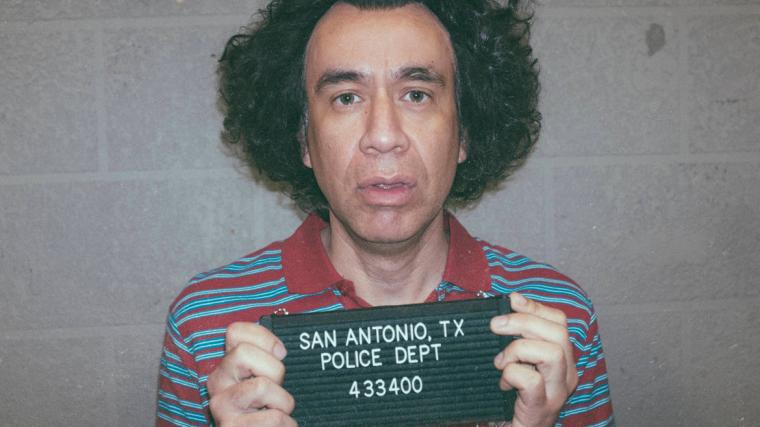 Inspired by Errol Morris' The Thin Blue Line (1988): Randall Dale Adams, wrongly accused and convicted of killing a Dallas police officer in a roadside shooting, makes the case for his innocence while all evidence points to the actual killer being the similarly interviewed David Harris.

Almost 32 years after first seeing it, Morris' legendary accomplishment – a movie that played a significant part in getting its unjustly incarcerated hero released from prison – remains my favorite documentary of all time. And “The Eye Doesn't Lie” will no doubt remain one of my all-time favorite Documentary Now! episodes, satirically flawless in everything from its editing rhythms to its visual compositions to its faux Philip Glass score to its freaking dissolves. (I literally gasped at the image of one newspaper date morphing into another precisely as it does in Morris' film.) Maybe you'll need to see The Thin Blue Line to fully get the joke of the Dreamcicle thrown from a squad car, or the information that, at the time of the murder, our accused simpleton was at home watching Mama's Family. That won't at all affect your pleasure in watching Armisen and Hader, as “Adams” and “Harris,” and their brilliantly cast co-stars provide umpteen reasons to not want to visit Texas for a prolonged period of time. 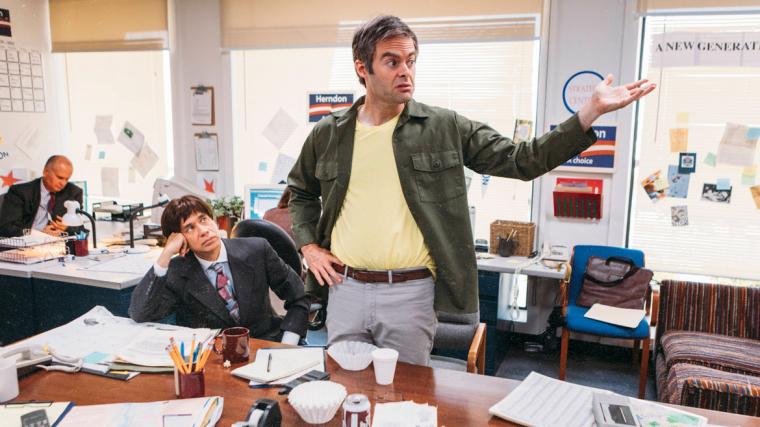 Carville is a figure ripe for parody; once, on an episode of 30 Rock, the man even quite shrewdly parodied himself. But he might have been born to be spoofed by Hader, who captures the political operative's drawling fanaticism with such perfectly cadenced precision and passion that if I were closing my eyes, I'm not sure I'd be able to tell the two voices apart. In this episode that swaps Clinton's run for the presidency with a seemingly doomed Ohio gubernatorial race, Arminsen's Stephanopoulos proxy basically just serves as a repository for gags about the guy's cuteness and blithe sexism, and the focus on the campaign feels undernourished. (Unlike in The War Room, the wonks here are forever playing defense.) But “The Bunker” – a title shared with a 1981 TV movie about Adolf Hitler (!) – is a first-rate comic harpoon tossed at the tenets of blind political loyalty, and enough really can't be said of Hader's ferociousness as the ragin' Cajun who will literally shoot himself to win an election. This is the kind of thing that Jim Carrey, in his prime, used to do, and even Carrey didn't do it as well. 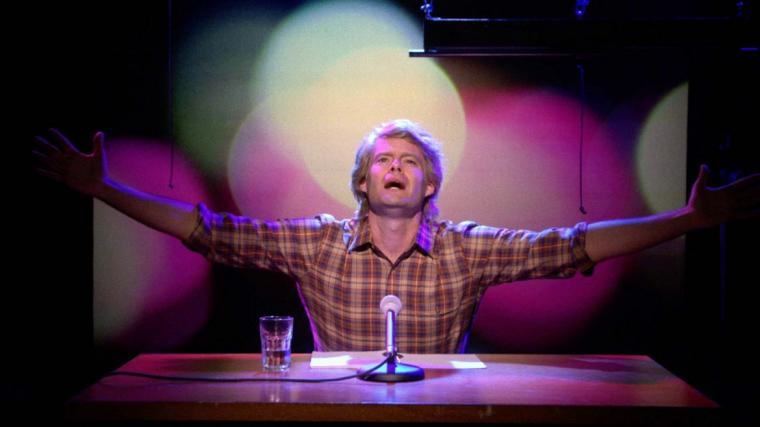 Inspired by Jonathan Demme's Swimming to Cambodia (1987): Monologuist Spalding Gray performs his off-Broadway recount of, among many other things, his experiences as a supporting actor filming 1984's Oscar-winning war drama The Killing Fields.

It's no shock to discover that Hader, one of our all-time-finest mimics, can do a flawless approximation of Gray's singular New England dialect, and Gray's penchant for unusual pauses, and the way he could go from shrieking at top volume to a soulful stage-whisper in less time than it takes to blink. What I didn't expect, though, was that such a potentially dicey film for ridicule – Gray having killed himself in 2004 – wouldn't feel even the slightest bit morbid, given the enormous affection that Hader clearly has for the man he's impersonating, and the barrage of sensational jokes that accompany the flannel-wearing egotist's breathless free-associations. (Gail's wobbly table is an especially nice touch.) The episode's ultimate punchline, one that explains the guest raconteurs who invade this solo act, isn't nearly as strong as the gags that precede it. Otherwise, though, I roared at everything from Gail handing a can of wood polish to a nonexistent stagehand to the strategically placed cameras to the illuminated sign advising listeners to supply “Polite Laughter.” Witnessing that bit, my own laughter was anything but polite. 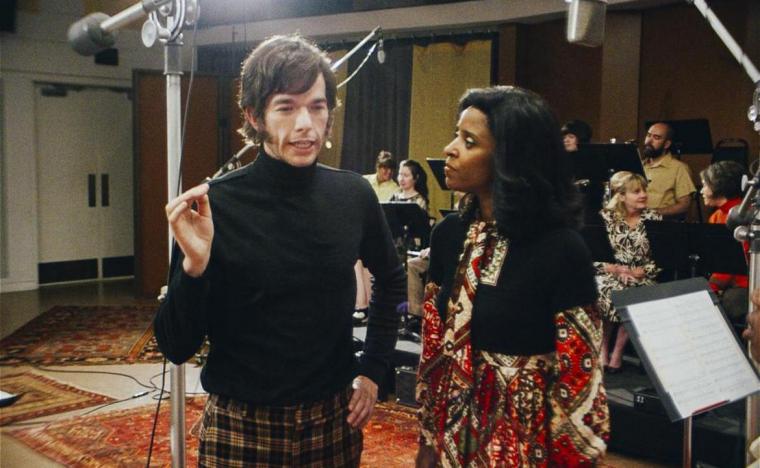 Inspired by D.A. Pennebaker's Original Cast Album: Company (1970): Captured studio footage of the recording session for Broadway's Stephen Sondheim classic, famed for co-star Elaine Stritch spending hours, and hours, trying to sing “The Ladies Who Lunch” to Sondheim's (and her own) satisfaction.

A handful of Documentary Now! episodes feature neither Hader nor Armisen in their casts, and this one is the most sublime – a pitch-perfect snipe at early-'70s show-biz chic boasting some of the wittiest song lyrics ever heard on a TV series. Those familiar with his comic sensibility won't be surprised to learn that, alongside co-writer Seth Myers and composer Eli Bolin, John Mulaney is one of the geniuses responsible for such tongue-twisting Co-op earworms as “Holiday Party” (which almost causes cardiac arrest for singer Richard Kind), “My Home Court” (a beauty for Hamilton Tony winner Renée Elise Goldsberry), and Paula Pell's fearsome channeling of Stritch in her wannabe showstopper “I Gotta Go.” But Mulaney is also a low-key, chain-smoking wonder playing Sondheim stand-in Simon Sawyer, and the whole thing climaxes with a group number – “Going Up” – that would be enough to make me shell out $200 for a mezzanine ticket to a legit Co-op production. So, practically, would the musical's book writer saying, “If there's two things I know, it's women, and exactly what's gonna happen in the future,” when we know full well the guy doesn't know anything about either.