Not two months after the release of ParaNorman, two other animated, family-friendly spook fests can now be found at national cineplexes: Tim Burton's Frankenweenie, the Mary Shelley-like tale of a beloved pooch's magical resurrection, and Hotel Transylvania, a manic slapstick about the world's most comically macabre bed-and-breakfast. And after catching up with the latter titles during a recent double feature, my immediate thought was this: Man, ParaNorman sure was good, wasn't it?

To be fair, neither of the newer scare flicks for kiddies is all that bad, though of the pair of them, I thought that Frankenweenie, sadly and surprisingly, proved the bigger letdown. Based on his 1984 animated short - a work that reportedly landed him the director's chair for his first Hollywood feature, Pee Wee's Big Adventure - Burton's 85-minute remake of his 29-minute original finds the lonely young suburbanite Victor Frankenstein (voiced by Charlie Tahan) employing high-powered electricity to bring his dog Sparky back from the dead. The movie itself could've used some high-powered electricity, too.

You won't hear me gripe about the movie's design, which is altogether terrific; the stop-motion animation, presented in evocative black-and-white, is gorgeously rendered, and Burton's allusions to classic horror films, and the means by which he delivers them, are thoroughly charming. (I especially appreciated how this Frankenstein parody managed to incorporate a burning windmill and incensed townsfolk brandishing lit torches in ways that were both satisfying and entirely logical.) But from Victor and his parents to the child's creepy schoolmates, the on-screen figures here employ few facial expressions beyond vaguely lobotomized stares, and the low-key, nearly somnolent readings by the cast - even by Winona Ryder and those traditionally spirited SCTV veterans Martin Short and Catherine O'Hara - further suggest that nothing much is at stake. (At least Martin Landau, in his role as a science teacher with an uncanny resemblance to Vincent Price, provides some nuttily elongated vowel sounds.) Frankenweenie is moderately diverting and clever, but it's only at the finale, when a host of additional deceased pets are brought to monstrous life, that the film displays any real energy; Burton's latest feels less like a movie designed to entertain kids than one that'll lull them into a cozy, comfortable sleep. Energy, meanwhile, is what Hotel Transylvania has in spades, even though, with its lazy sentiment and halfhearted plotting and de rigueur (and endless) climactic dance to a sprightly hip-hop number, you could hardly argue for it being a stronger work than Frankenweenie. Directed by Genndy Tartakovsky, the film quietly dies whenever its Dracula (voiced, rather amusingly, by Adam Sandler) mopes over his potential abandonment by his sheltered, 118-year-old daughter (Selena Gomez), and if you thought this might be the rare Sandler endeavor happily devoid of fart and poop jokes ... well, silly, silly you. Yet this goofy, zippy, candy-colored monster mash still offers a goodly amount of random pleasures, with many of its most inventive visuals seemingly caught out of the corner of your eye, and heaven knows it's wittier than any of the live-action comedies its vocal star has foisted on us over the past decade. Hotel Transylvania may not be ParaNorman - or, on a strictly professional level, Frankenweenie - but it's borderline impossible not to be charmed by a scare-flick spoof featuring a game of bingo hosted by a mummified, disembodied head, or the Invisible Man playing (and losing) charades, or a Zombie Beethoven vacantly grunting "Duh duh duh du-u-u-u-uh!" That bit may not be classical, but it's damned close to classic. 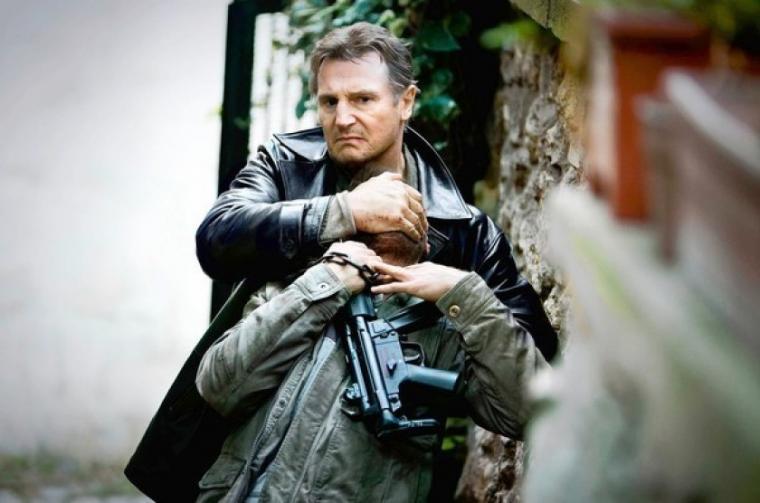 If you saw Taken 2 this past weekend, and I'm presuming a bunch of you did, which part of this action-thriller sequel made you laugh the hardest? Liam Neeson's vengeful dad and his vicious assailant agreeing to drop their weapons and engage in a fistfight in a makeshift boxing ring? The casting of Maggie Grace (who, let's recall, played a twentysomething on Lost eight years ago) as a girl still trying, after two unsuccessful attempts, to secure a driver's license? For my money, it was the scene in which Neeson was surrounded by a half-dozen goons with firearms - one of which is pointed at the head of our hero's wife - and the armed men, for some bizarre reason, allowed Neeson to reach into his pocket, pull out his cell, and make a phone call. I was half-surprised they didn't also offer a complimentary shoeshine and continental breakfast. Still, for all of the sequences that are nearly as laughable as this one, I'd be lying if I didn't admit to Taken 2's ludicrousness being, more often than not, enjoyably ludicrous, and director Olivier Megaton's fast-paced follow-up isn't anywhere near as unbearably, ridiculously portentous as its forebear, which counts for a lot. The movie may be a joke (and unlike The Expendables 2, not an intentional one), but while there's no real punchline here, at least there's a bit of punch.