Fairly Stale Fairy Tale: "Mirror Mirror," "Jeff, Who Lives at Home," and "Wrath of the Titans" Mirror Mirror is a slightly modernized, family-comedy version of the Snow White fairy tale, and offhand, I can think of few directors less suited to the material than this film's Tarsem Singh, the music-video veteran whose big-screen credits include those wildly baroque (and decidedly adult) spectacles The Cell and Immortals. Yet every once in a while, when a director is spectacularly wrong for a project, the results can be much more interesting than if he were right for it, and that certainly seems the case here; this aimless, pointless little trifle is mostly a drag, but I can only imagine how deadening it might've been without Singh at the helm.

Of course, recruiting a director with a discernible sense of comic style wouldn't have hurt either, because God knows this script could've used one. Written by Jason Keller and Melissa Wallack, Mirror Mirror is pretty much the Brothers Grimm saga as you know it, except with more anachronisms and labored slapstick and corny jokes; it's the sort of movie in which Nathan Lane's presence as a mugging, braying manservant isn't appropriate casting so much as a given. Yet Singh doesn't appear to have much talent for, or even basic interest in, the staging of the film's physical comedy, which comes off as merely awkward, and his leads do little more than go through the motions.

Julia Roberts, portraying Snow White's wicked stepmother, has one terrific moment in which she cackles like Richard Gere just snapped a jewelry box on her hand, but her performance basically amounts to a one-note take on "comically malevolent." And while they look terrific, Lilly Collins' Snow White and Armie Hammer's Prince Alcott are awfully bland, though you can sense Hammer striving for (and not quite achieving) a spirited mania after a magic potion gives his prince the friskiness of a puppy. Mare Winningham at least lends the proceedings some much-needed gravity, and the actors playing the seven dwarfs - an across-the-board-excellent crew consisting of Ronald Lee Clark, Joe Gnoffo, Martin Klebba, Mark Povinelli, Jordan Prentice, Sebastian Saraceno, and Danny Woodburn - give their broad characters and lame gags far more personality than they deserve; a Snow White tale told from their perspectives might really have been something. Overall, though, the lethargically paced, halfheartedly executed Mirror Mirror is just tedious - not as childishly bad as its trailers suggested, but in terms of live-action family entertainment, barely a notch above all those juvenile throwaways that Eddie Murphy routinely foists on us.

And yet, while you can easily bemoan the movie's weak stabs at comedy and sentiment, you can't ignore its outlandish, frequently ingenious design. The snow-covered woodland sets here are pretty tacky; in general, they resemble storybook locales smartly edited out of The Princess Bride. But the dwarfs' tree-trunk home is beautifully detailed, the queen's retreats into her enchanted mirror are audaciously imagined, and the palace sequences oftentimes display a mad, eye-popping grandeur. (The film's masquerade ball, with guests outfitted in an exotic array of animal costumes by designer Eiko Ishioka, suggests Amadeus as played by the passengers of Noah's ark.) And even while you're groaning at the gags and yawning at the by-the-book storytelling, weird visual curlicues keep grabbing your interest: human playthings enacting a life-sized game of Battleship; a brutal attack by a pair of enormous wooden marionettes; a spa treatment involving piranha and grubs and an actual bee giving the queen bee-stung lips. Mirror Mirror may not quite work, but I thank Singh and his remarkable designers for working overtime to make it look like something - even if that something resembles a drag-show fairy tale in which everyone lives gaudily ever after. 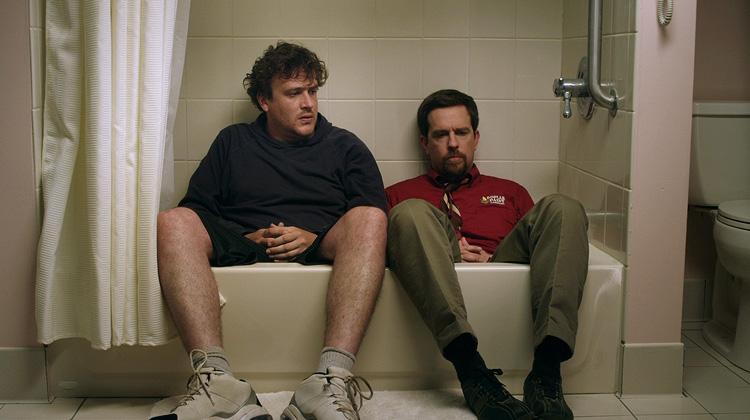 JEFF, WHO LIVES AT HOME

Written and directed by Jay and Mark Duplass, the independent comedy Jeff, Who Lives at Home concerns a pot-smoking, basement-dwelling, 30-year-old slacker (Jason Segel) who - through a series of astonishing coincidences that he takes as signs from above - eventually reconnects with his hostile older brother (Ed Helms) and disillusioned mother (Susan Sarandon). And here's a rough transcript of the conversation that took place, some 10 minutes into the film, between two nearby audience members at my screening: "What is this?" "It's a weird show!" "Do you like it?" "No!" "Do you wanna see Hunger Games instead?" "No!" "Then I guess we're stuck with it!"

Blessedly, these talkative idiots left a couple minutes later, but I bring up their banter as a way of conceding that the movie - with its scruffy visuals and meandering focus and lack of traditional narrative beats - is a bit on the off-putting side. I also recommend that, unlike those unhappy patrons, you do stick with it, because Jeff, Who Lives at Home turns out to be an offbeat little gem: quirky, funny, and gently touching. I might never get fully on-board with the Duplasses' unpolished, hand-held technique (the brothers' habit of zooming in for meaningless close-ups always makes me think their camera has the hiccups), but the writers/directors of Cyrus and Baghead have a lovely knack for subtle character revelation and unforced poignancy, and they generously allow their performers plenty of breathing room. Segel and Helms develop a wonderfully, comically antagonistic rapport here, and Sarandon, Judy Greer, and the much-missed Rae Dawn Chong are all first-rate; even when Jeff's script goes somewhat off the rails, as it does during its Altman-lite emotional climax, the cast keeps it afloat. It's a strange, charming, unclassifiable wisp of a movie that winds up rewarding patient viewers in spades, and impatient ones need not apply. And should learn to shut the hell up. WRATH OF THE TITANS