Pixar's animated adventure Coco opens with a lot – a lot – of exposition. In it, we're introduced to our narrator Miguel (voiced by Anthony Gonzalez), a 10-year-old Mexican boy who longs to be a famous singer and guitarist like his matinée-idol hero Ernesto de la Cruz (Benjamin Bratt). But Miguel's family, as the child explains, has strictly forbidden such pursuits, owing to the time his great-great-grandfather forever left his wife and infant daughter in search of fame and fortune. With little Miguel prattling on, we're also told of his family's consequent successes as shoe-makers, and shown de la Cruz's unfortunate demise under a fallen church bell, and given histories on every generation of Miguel's clan over the past century, and treated to a primer on Mexico's Day of the Dead celebration … . And just when we're about ready to scream “Enough!” at Coco's barrage of voice-over information, someone beats us to it: the customer whose shoes, unbeknownst to us, Miguel has been shining the whole time, and who'd appreciate it if the kid would just do his job and shut up already.

That's a pretty stellar joke, primarily because of how surprising it is, and it's key to the success of Coco – a movie that achieves its greatest effects, both comedic and emotional, though unexpected flourishes that arrive only after considerable build-up. Much time is spent, early on, in Miguel's village as the townspeople prepare for the Día de los Muertos holiday, with equally ample discussion dedicated to how deceased relatives wait in the Land of the Dead for their annual chance to return to the land of the living. But when Miguel himself, through supernatural events, travels to this otherworldly locale, the Land of the Dead proves glorious in ways no living soul could have dreamed, boasting vast, colorful neighborhoods stacked miles high and, for resident de la Cruz, grand towers of guitars, flowers, and bottles of wine. (If there were an Oscar for Animated Production Design, Coco would take it in a walk; we can only pray for visual treats such as these in Jim Cameron's eternally promised Avatar sequels.) Convinced that de la Cruz is his great-great-grandfather, Miguel seeks the man out with the aid of an endearing skeletal goofball named Héctor (Gael García Bernal), who we initially see trying to sneak back to Earth disguised, ineffectively, as Frida Kahlo. Nearly an hour later, we'll have fresh, unanticipated insights into de la Cruz and Héctor that land with earned jolts, with the added benefit of that Kahlo gag proving newly, hilariously relevant.

If I'm ultimately less enamored with Coco than I've been with other Pixar titles, it has less to do with the film's quality than with the sameness of its themes – “Follow your dreams!” “Family is important!” – and its paint-by-numbers approach to plotting. (Another epic journey; another ticking-clock narrative; another set of wisecracking pals to help and hinder.) But I greatly enjoyed director Lee Unkrich's family outing for its bevy of unanticipated fringe touches, from the black-and-white film clips of de la Cruz in his prime to the haunting notion of a death after death for those left unremembered. I was continually astonished at the visual design and impressed by the Michael Giacchino score, with its “Remember Me” refrain growing lovelier and more touching with repetition, much like A Mighty Wind's “A Kiss at the End of the Rainbow.” And, like the other sniffling adults at my screening, I was moved by the eventual reunion – if one held on separate planes of existence – between the living and the dead, which can't help but leave a sentient grown-up misty-eyed. Warning: The last five minutes of Coco are like the first 10 minutes of Up. Stock tissues accordingly. 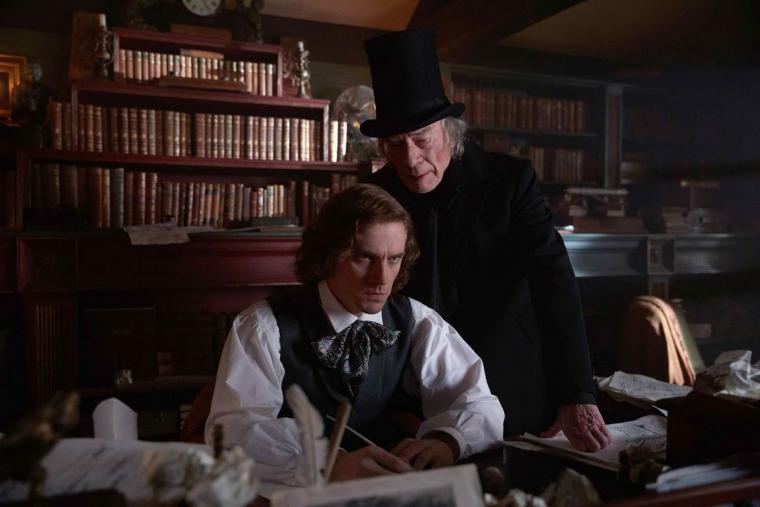 THE MAN WHO INVENTED CHRISTMAS

Christopher Plummer's voice is one of God's great gifts to entertainment, and for my money, that voice, and the actor's presence, were almost enough to make The Man Who Invented Christmas worthwhile. A mildly inventive bio-pic that follows Charles Dickens as he labors to write A Christmas Carol, director Bharat Nalluri's seasonal fable is typical in lots of expected genre ways – Dickens had daddy issues! – and sadly predictable in many of its particulars, as when the author's wife (Morfydd Clark) delivers the requisite speech about how Charlie seems to care more about his fictional characters than his own family. And while Dan Stevens' Dickens is adorably ingratiating when entertaining his kids with funny character accents, the actor's face, in general, is doing way too much work, with this peevish, easily distracted Dickens emerging as little more than a bland compendium of popping eyes, arched eyebrows, huffy sighs, and double-takes. (With daddy issues!) Still, Nalluri and actor/screenwriter Susan Coyne – so splendid as Slings & Arrows' beleaguered assistant Anna – do some imaginative work blending Dickens' real world with the literary universe of Ebeneezer Scrooge, Bob Cratchit, and the rest, and there are solid performances by Jonathan Pryce, Justin Edwards, Simon Callow, and an especially haunting Donald Sumpter as Jacob Marley. Best of all, it should go without saying, is Plummer, whose grizzled authority and natural wit as Scrooge would have me stoked for him headlining an actual A Christmas Carol, if only it didn't mean having to sit through A Christmas Carol again.