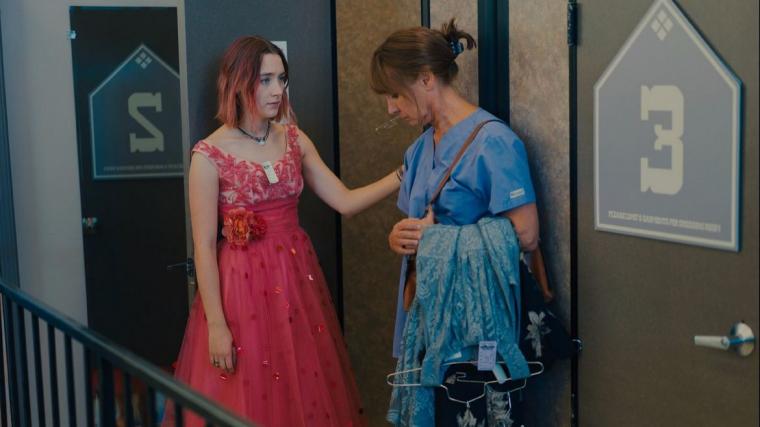 Last week, in my review of the marvelous family drama Wonder, one of my few gripes concerned the implausible drama-club scenes, and I wrote, “Movies never seem to get school theatre right.” Clearly, bitching occasionally pays off. Because less than a week later, I watched writer/director Greta Gerwig's Lady Bird get school theatre exactly right – which wasn't shocking, in retrospect, considering this coming-of-age comedy appeared to get everything right about damn near everything.

Gerwig's protagonist is Christine McPherson (Saoirse Ronan), a senior at a Sacramento-based Catholic girls' high school during the 2002-3 school year. Preferring to go by the self-imposed nickname “Lady Bird,” Christine has what could generously be called an “artistic temperament,” and her principal Sister Sarah Joan (Lois Smith) suggests, at the film's start, that this eccentric, individualistic girl explore those qualities by trying out for the fall musical. Christine admits surprise that they even have a drama program – Sister Joan counters with amazement that Christine, as a senior, didn't know that – and decides to go for it alongside her best friend Julie (Beanie Feldstein). By Lady Bird's 15-minute mark, the movie has already been rich with insights regarding adolescence, family, and friendship. In the high-school-musical scenes, however, Gerwig's sterling achievement really starts to shine.

As a lifelong theatre geek, I was delighted to see Christine belt out the up-tempo “Everybody Says Don't,” from Stephen Sondheim's Anyone Can Whistle, for her audition piece, complete with gesticulating arms and deliberate over-enunciation. I was even happier when this was followed by a student from the neighboring boys' school (Lucas Hedges' Danny) singing “Giants in the Sky” from Into the Woods, and another assaying “Being Alive” from Company, and so on, with one hopeful after another vying for roles in a show that turned out, with charming inevitability, to be Sondheim's Merrily We Roll Along.

This montage was genius in terms of both expressed talent and song selection; you could easily imagine the audition flier reading “prepare 16 to 32 bars of a Sondheim number for the accompanist.” Gerwig, though, presents all of Merrily's rehearsal and performance details – the indulgent acting exercise, the painted backdrops, the bring-a-costume-from-home costumes, the curtain call – with this sort of pinpoint precision. (Stephen McKinley Henderson, as the production's depressed director, gauges the crowd's overall response and glumly mutters, “They didn't understand it.”) And while Lady Bird is stunningly accurate about teen-thespian life, I'm hard-pressed to think of anything in Gerwig's riotous, moving, fiercely humane entertainment that doesn't feel wholly believable and honest, extending to Christine's and Julie's habit of sneaking off to snack from a bulk-size jar of communion wafers. (As Julie tells an appalled passer-by. “They're not consecrated!”) 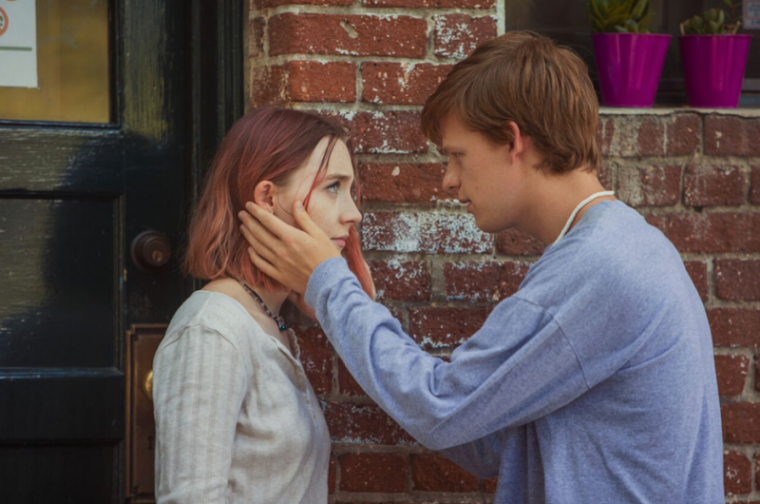 If it seems that I've spent an inordinate amount of space on the movie's drama-club angle, that's partly because it's the catalyst for much of Christine's senior year: her romance with the intensely sweet Danny that's littered with all sorts of red flags; her break with Julie as Christine grows too cool for school theatre. But it's mostly because this was the Lady Bird element I most thoroughly connected with, and it's nearly impossible to imagine viewers not finding something, many things, about Gerwig's outing that speak to them on deep and profound levels. In basic outline, the film follows Christine as she deals with traditional senior-year events and crises, including getting a part-time job, experimenting with sex, and enduring the college-application process. Yet while all of this, under Gerwig's exceptional guidance, is very specifically happening to a Catholic-high-school girl, and Ronan gives one of the movie year's most specific (and beautifully textured) performances, what emerges is a film of almost startling universality.

Who, after all, hasn't yearned to escape a childhood identity, or past mistakes, or the suffocating confines of one's hometown? (When Christine describes Sacramento as “the Midwest of California,” the sentiment drips with disdain.) Who hasn't fallen for the wrong romantic partner, such as the ones embodied here by Hedges with intense sweetness and Timothée Chalamet with divinely funny adolescent ennui? Who hasn't ached to be excellent at an endeavor, be it stage performance or mere truth-telling, only to achieve mediocrity at best? And who hasn't, at some point, felt like a crushing disappointment to his or her parents, whether they're eternally understanding like Christine's dad Larry (a hushed, privately sad Tracy Letts) or helplessly judgmental like her mom Marion (the sublimely multi-dimensional Laurie Metcalf)? In the thunderously well-acted Lady Bird, you not only see yourself mirrored in the thoughts, deeds, and choices of Ronan's Christine, but in everyone else in her orbit, which gives this seemingly slight character study an emotional grandeur that utterly belies its brisk, 90-minute running length.

During the film's opener, in a rare moment of loving detente, Christine and Marion drive home from an overnight college visit listening, and silently weeping, to the final sentences of The Grapes of Wrath on audiobook. After Steinbeck's tale ends, Christine instinctively turns on the radio, and her mother asks her to please turn it off, saying, “Let's just sit and reflect on what we heard.” In all likelihood, that's just what you'll want to do at the end of Lady Bird. Maybe you'll recall the hilarity of Christine's car-fender prank, or Danny's excuse, as an Irish-Catholic, for being single. (“It's hard to find a girl to date who's not my cousin.”) Maybe you'll think about the sweetness of Marion's and Larry's morning bathroom ritual, or mom and daughter participating in their favorite Sunday activity. Maybe your reverie will be on Christine's shrieking joy after her first kiss, or Marion's devastated expression after an airport drop-off, or a pair of slow-dance partners as they enjoy the best prom ever. No matter what you opt to sit and reflect on, I bet you'll be smiling when you do. 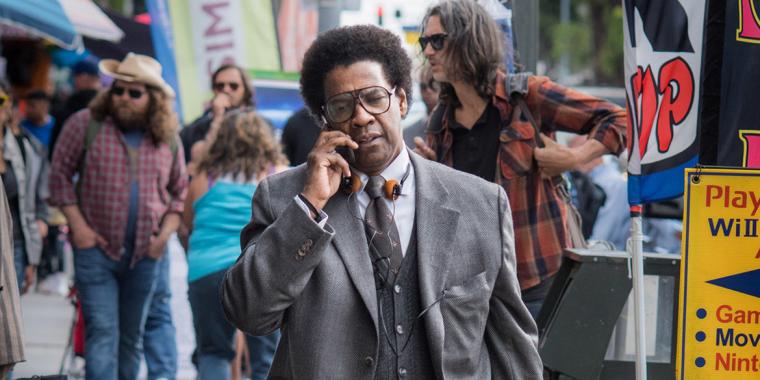 As Denzel Washington's title character states in Roman J. Israel, Esq., “The ability to keep conflicting ideas in one's head takes effort.” Not in this case it doesn't, because I'm finding it remarkably easy to live with the conflicting notions that (a) Washington is quite good in writer/director Dan Gilroy's character drama, and (b) the movie itself is pretty lousy.

It actually begins well, with defense attorney Israel – a legendary Civil Rights advocate with an unspecified form of Asberger's – forced to join an upscale Los Angeles law firm and find ways, including a hugely unethical one, to deal with the slow erosion of his belief system. But despite the strength of Washington's tic-laden portrayal, with Israel's desperate plea for a job among the star's most affecting recent moments, Gilroy's confused, maddening script systematically ate away at my belief system. Kindly Civil Rights activist Maya Alston (Carmen Ejogo, trying her best) spends an entire introductory scene not knowing who Israel is, and later sobs when telling him how influential his work has always been to her. New employer George Pierce (Colin Farrell, doing a lot with table scraps) loses a client and a considerable amount of dough due to Israel's ineptitude, and when next we see him, lauds his new hire for his unorthodox methods, vowing to change the firm's direction in accordance with Israel's talents.

And, oh, the jaw-dropping contrivances in this thing! The plot-twisting reveal of Israel's climactic client would only be a shock if you'd never seen a single episode of courtroom-themed episodic TV, and by the final act, Israel is accidentally running into Alston and Pierce on the street and in restaurants with almost comedic convenience, as though L.A. were the smallest of small towns. Washington so rarely gets (or takes) the chance to stretch beyond his comfort zone that it's particularly galling to find Roman J. Israel, Esq. such a bummer – although, speaking as someone who didn't care for Gilroy's 2014 Nightcrawler either, it wasn't an altogether surprising one. In that film, we were told, with much consternation and hand-wringing, that tabloid journalists were shady. In this one, it's high-paid corporate attorneys. Here's hoping Gilroy already has the skinny on loan sharks.

For reviews of Coco and The Man Who Invented Christmas, visit “Flores para los Muertos.”