From Getty to Gag-Me: “All the Money in the World,” “Downsizing,” and “Father Figures” 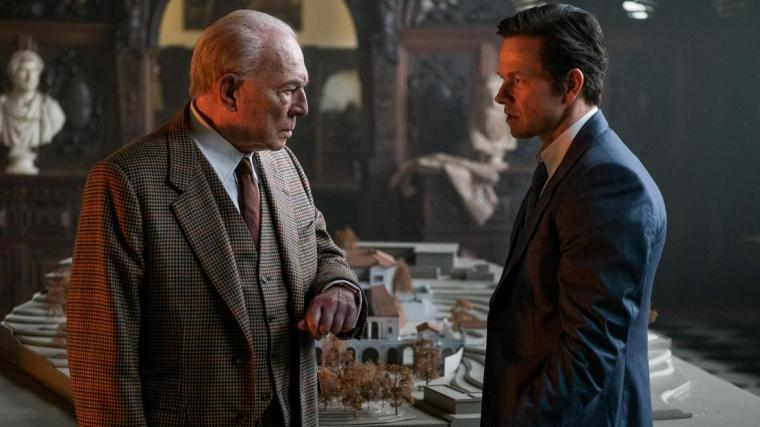 ALL THE MONEY IN THE WORLD

Had Ridley Scott's dramatic thriller about the 1973 kidnapping of J. Paul Getty's grandson been released in its intended form, with Kevin Spacey portraying the billionaire tyrant, All the Money in the World would likely have been commended for what it is: a solidly constructed, handsomely mounted, slightly bloated tale of avarice and determination boasting superb period detail and strong performances. But then, as has been widely reported, Spacey became the subject of numerous sexual-harrassment allegations, Scott re-cast the Getty role with Christopher Plummer, and all of Spacey's scenes were re-shot – in nine days – and blended with the previously completed footage almost in time for the movie's scheduled release date. (The film was supposed to open on December 22, and instead debuted on Christmas Day.) So I think it's time to commend Scott's achievement not merely for what it is, but for what it is in light of its circumstances: a freakin' miracle.

When I first heard about that nine-day re-shoot, I presumed that the character of Getty was, at best, an extended cameo. Certainly, the original trailer featuring Spacey made him seem like a Very Special Guest Star in a tale that focused primarily on the efforts of the kidnapped 16-year-old's mother Gail Harris (Michelle Williams) to retrieve her son with no financial assistance from her cruel, withholding former father-in-law. But Getty, it turns out, is all over the place here, with Plummer appearing in more than a dozen lengthy scenes – including flashbacks – and the scenes themselves radiating Scott's usual technical acumen and gifts for memorable composition and evocative imagery; it looks like it took nine days just to light the damned things. 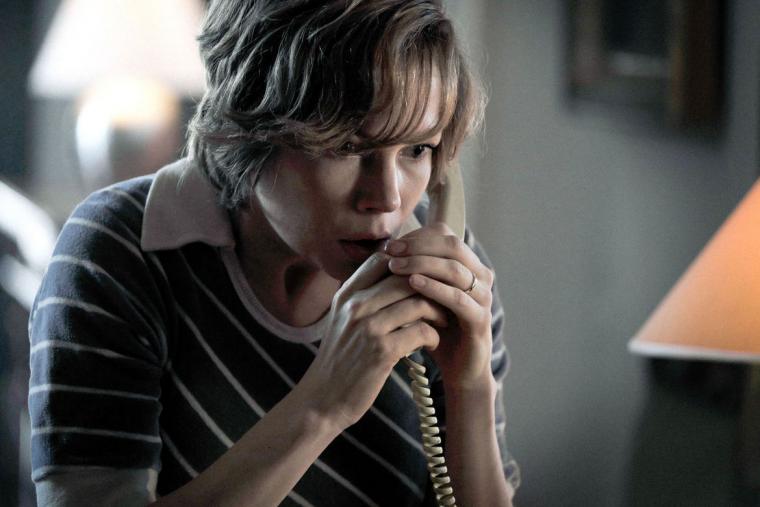 Better still, having been given almost nothing in the way of prep time, Plummer doesn't feel the least bit like a placeholder. Instead, he gives what has to rank as among the most forceful, sinister, and majestic performances of Plummer's long screen career, creating a J. Paul Getty whose insatiable, diseased craving for more – more money, more respect, more ownership – has eradicated all remaining vestiges of compassion and humanity. At no point does Plummer try to win the audience's empathy, or even its understanding, and just when you think Getty can't possibly get more monstrous, he sinks even lower, agreeing to pay a greatly reduced and tax-deductible ransom in exchange for custody of all four of Harris' children. This Getty is loathsome, yet Plummer is remarkable – utterly terrifying, weirdly captivating, and almost obscenely entertaining.

He's so good, in truth, that you almost feel bad for the rest of Scott's film, which is first-rate yet hardly as electrifying as its Plummer sequences. (No doubt the threat of that nine-day deadline ratcheted up the energy.) But despite being saddled with some narrative repetition in its midsection, this is still a beautifully paced 130 minutes that feels as though it contains a mini-series worth of dramatic payoffs – screenwriter David Scarpa adapted John Pearson's book – and is one of the most consistently well-acted efforts on Scott's résumé. You can pretty much count on overall excellence when even Mark Wahlberg (as Getty's resident fixer) shakes off his recent cartoonishness to deliver a subtle, thoughtful portrayal, and equally smart work is provided by Charlie Plummer (no relation to Christopher) as the kidnapped John Paul Getty III, Andrew Buchan as his drug-addicted father, and Romain Duris as an alternately sympathetic and frightening captor. Williams, meanwhile, underplays with spectacular skill and bottomless maternal warmth, and ensures that All the Money in the World is emotionally gripping even when Christopher Plummer is nowhere in sight. When told by his kidnappers that she has to come up with $17 million for the return of her child, Harris tries to explain her removal from Getty's orbit with the desperate plea “I'm an ordinary person.” Harris may have been. Williams, on-screen, is anything but. 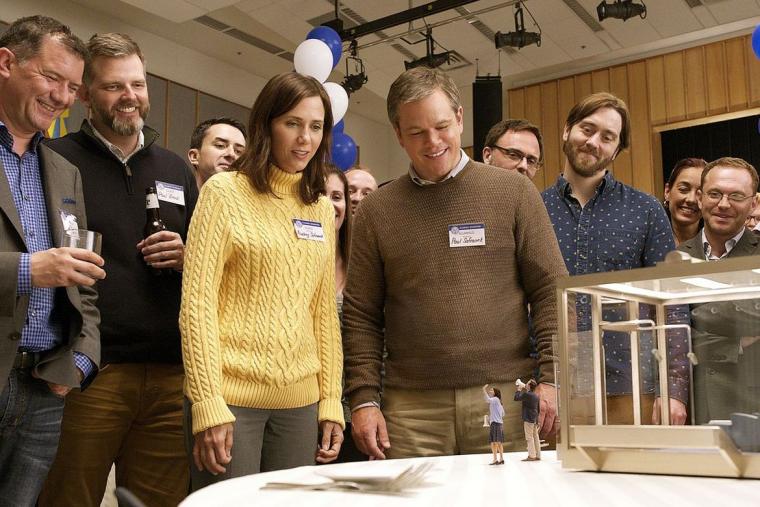 If you saw the trailers for Alexander Payne's Downsizing that were accompanied by the happy pulse of Talking Heads' “Once in a Lifetime,” you'd be right to expect a giddy sci-fi comedy about a guy undergoing a procedure that reduces him to five inches, and the nuttiness of his exposure to behemoth pencils, two-story dandelions, and Absolut Vodka bottles the size of moving vans. Those items are duly accounted for.

What's missing, though, is nearly any sense of happiness or giddiness, because this world according to Payne and screenwriting partner Jim Taylor is a profoundly sedate and sad one, and their film – occasionally amusing and visually extraordinary though it is – seems determined to not give us the easy good time we were led to anticipate. (It's telling that the most memorable bit is the delivery of a monologue designed, successfully, to wring tears.) I have to believe the deceptive trailers are at least partly responsible for the collective meh-to-angry response the movie appears to be generating among its viewers, with Downsizing receiving a “C” rating from the market-research firm Cinemascore, which is like a “D” anywhere else. Because while the film may not be ha-ha funny, it's certainly Alexander Payne funny, and even though it has significant failings, slip-ups were practically inevitable given the perilously high wire on which Payne and Taylor have chosen to walk. 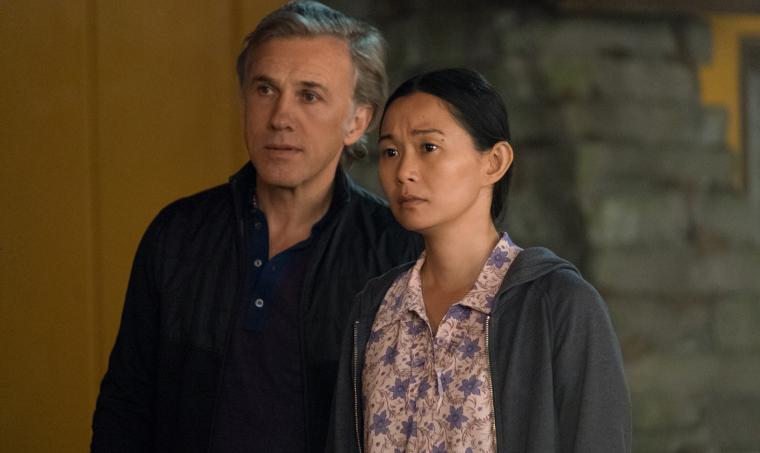 Most audiences, I think, will agree that Downsizing's first third is its best, with the depressed, financially struggling Omaha couple Paul and Audrey Safranek (Matt Damon and Kristin Wiig) agreeing to shrink in size via a scientific and (hopefully) planet-saving method and enjoy the lush life in one of Earth's new “micro-communities.” (The Safraneks' lavish dollhouse of choice rests in a biodome-enclosed locale whose chief spokespeople are Neil Patrick Harris and Laura Dern – so you know they can be trusted.) The pacing, as in most Payne outings, may be leisurely, and the humor may be low-wattage to a fault. But the exposition is handled gracefully, and the details are hilariously precise, from the procedure's fine-print warnings to the technicians' blasé boredom to the microwave-oven “ding!” that sounds after shrinkage is complete. (Recovering patients are promptly lifted off their hospital beds with spatulas.)

It's at this point, however, that you can feel Downsizing begin to teeter off the rails, because as soon as Paul (although not Audrey) gets small, the movie's themes get capitalized Big, and in unfortunately moralitsic ways that come dangerously close to finger-wagging. Financial inequality, political upheaval, the plight of oppressed minorities, the perils of technological innovation, global warming, ecological devastation, poverty, homelessness – Payne and Taylor attack 'em all, but their focus is so random that none of these subjects are given the attention they deserve. We also can't help but notice, in the film's latter two-thirds, how thunderously dull Damon is in relation to his co-stars, given that Paul is the character who has to learn things, and Christoph Waltz, Udo Kier, Hong Chau, and others are the ones who get to do things. (One of the things Chau does, beyond making us laugh loudly and often, is perform that aforementioned killer monologue within an inch of its life.) There are still wonderful moments within Downsizing's larger, less successful portion, including a long, loving stare at a vanishing sun and a marvelous visual gag involving the eternal closure of a tunnel. But the widespread, considerable displeasure toward Payne's latest isn't entirely unwarranted. In terms of progressive enjoyment, it's The Incredible Shrinking Movie. 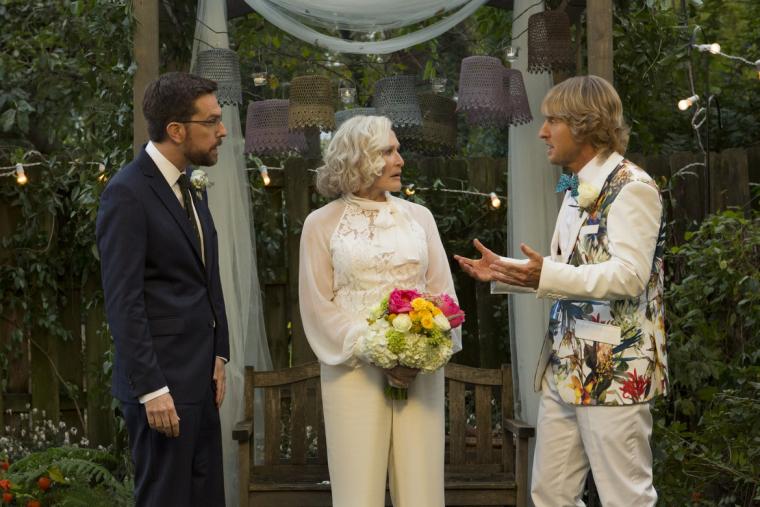 In Father Figures, Owen Wilson and Ed Helms play twin brothers seeking the identity of their birth father, and … . Okay, can we stop here? Owen Wilson and Ed Helms?! No actors playing siblings, let alone twins, have ever seemed less alike physically or temperamentally – and yes, I am including Arnold Schwarzenegger and Danny DeVito, who were at least allowed a shared comic spirit. (You keep waiting for a joke to be made about Wilson's and Helms' lack of resemblance, or for a twist revealing that they're not actually related, but one never arrives.) Meanwhile, few comedies have ever seemed less like comedies than this astounding misfire from debuting director Lawrence Sher and Office Christmas Party scribe Justin Malen, which appears to want to be both a sentimental testament to brotherly love and a madcap Hollywood slapstick, and fails miserably at both apparent aims. Helms weeps over Wilson's incorrectly presumed death, and Christopher Walken gets downed with a tranquilizer dart. Wilson agonizes over his dire financial straits, and the camera stares at a cat's swollen testicles – twice. Glenn Close gets teary over the lies she's told her sons, and Wilson whizzes on a little kid. None of the film's disparate sensibilities, or disparate castmates, come remotely close to aligning (the gonzo ensemble includes J.K. Simmons, Ving Rhames, June Squibb, and Terry Bradshaw), and the plotting is criminally bereft of believable human behavior. Sher's movie would also be completely bereft of laughs were it not for a couple of Kat Williams' more oddball readings, and for the one-scene wonder Andrew Wilson, whose bit as a sotto voce hotel clerk makes the proceedings a gut-busting riot for all of 30 seconds. Had everyone else been similarly unintelligible, Father Figures might've actually been something special.

For reviews of Darkest Hour, The Shape of Water, and Pitch Perfect 3, visit “You Can't Keep an Oldman Down.”