You Can't Keep an Oldman Down: “Darkest Hour,” “The Shape of Water,” and “Pitch Perfect 3” 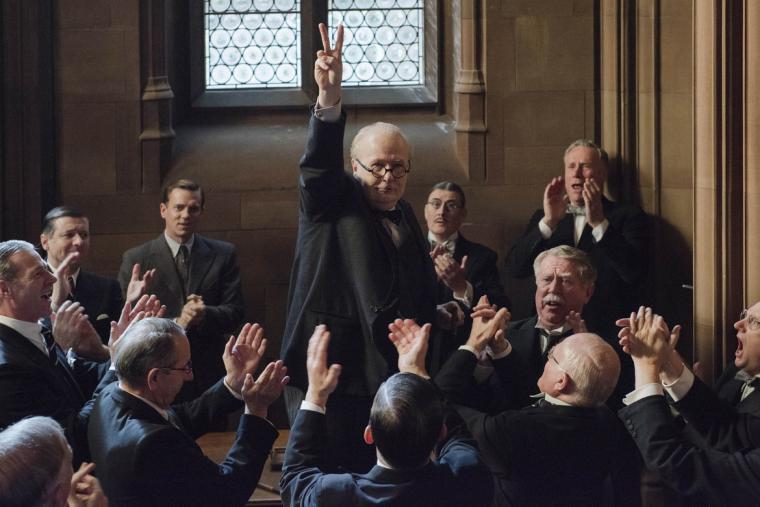 Among the movies of 2017, there have certainly been more objectively fun ones than Darkest Hour, director Joe Wright's Winston Churchill bio-pic that follows the British icon through his first weeks as prime minister, ending with his order for the historic World War II evacuation memorialized in Christopher Nolan's Dunkirk. But I'm not sure that any film this year has found anyone having as much fun as Gary Oldman clearly is in his role as Churchill – and blessedly, it's a performance joy equal to the considerable joy we feel while watching him.

Only the rarest of actors, such as F. Murray Abraham in Amadeus, are able to come wholly to life while buried under heavy prosthetics. But it's evident that Oldman feels positively freed by the (exquisite) makeup job that encases the star in Churchill's bald and bulging frame; he's so magnificently animated, and so truthful, and so funny, in his physicality, gestures, readings, and expressions that even though he might initially seem all wrong for the role, Oldman ends up nothing but right. Anyone with even the remotest interest in the art of acting is encouraged to catch Wright's film just to see what can result when a performer dives this deeply into outsize character work and isn't afraid to let you see what a grand time he's having in the process. I only wish we were able to see it in a better film than this one. 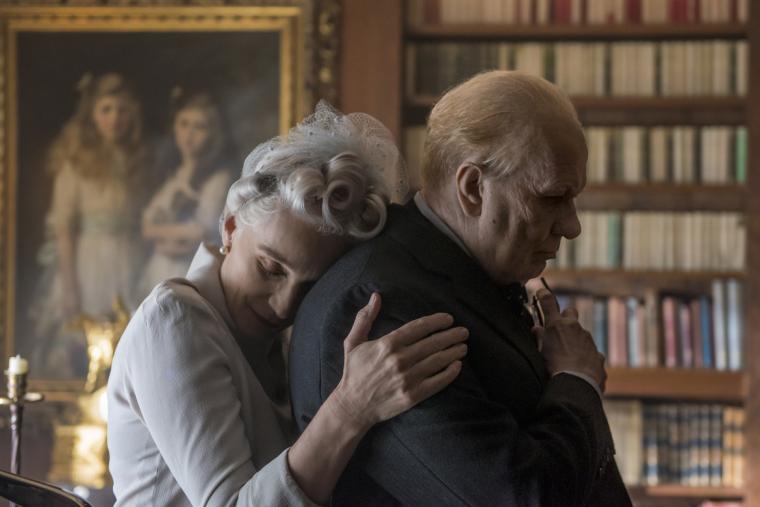 There will be viewers, no doubt, who'll love Wright's and screenwriter Anthony McCarten's traditional, Masterpiece approach to the Winston saga, with its familiar narrative beats, recognizable character types, and prescribed emotional uplift in the rousing courtroom finale; it's The King's Speech redux, and Wright's film appears just as nakedly designed for acclaim and awards. (Darkest Hour even features Ben Mendelsohn in the King George VI role that won Colin Firth his Oscar.) I found the approach pretty tedious, considering that nothing about it is remotely surprising. Neither, unfortunately, are the supporting figures: Kristin Scott Thomas, as Churchill's cheerleader wife, delivers witty quips right on cue; Lily James, as his winsome secretary, humanizes the grump and endures the requisite exposition; Ronald Pickup's Neville Chamberlain and Stephen Dillane's Viscount Halifax provide light raps on Winston's knuckles. (Oddly, Mendelsohn and Dillane have also chosen to employ speech impediments that make both characters sound vaguely like Elmer Fudd.)

And while it was definitely fascinating, especially post-Dunkirk, to get so much behind-the-scenes skinny leading up to Operation Dynamo, I did want to punch the movie for its suggestion that the evacuation only transpired after Churchill took an unplanned tube ride to gauge the commoners' moods, their wide-eyed optimism and patriotism unwittingly changing the course of history. Effective though its button-pushing tactics are, Darkest Hour is still blah. It's also blah with a genius leading performance. I'll take it. 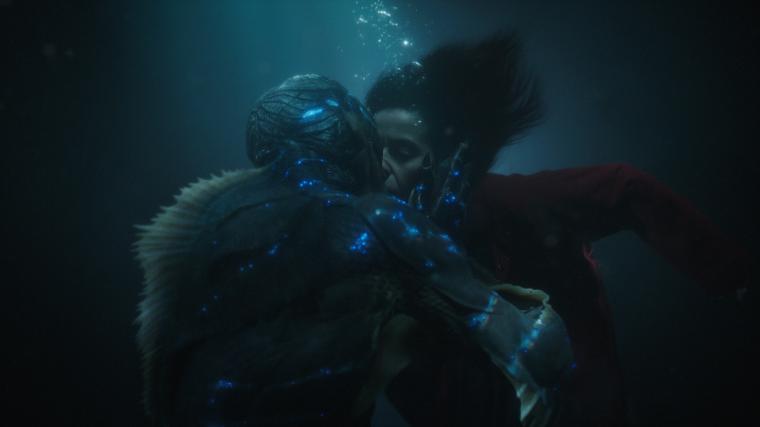 THE SHAPE OF WATER

Is it possible for a movie to be simultaneously over- and underwhelming? I pondered this throughout my Chicagoland screening of The Shape of Water, Guillermo del Toro's fantasy/romance/fairytale/thriller that's never less than narratively engaging and visually ravishing, yet never quite as emotionally resonant as I kept hoping it would be. (The movie has yet to open locally, but with the Oscars coming up, no doubt will soon.)

Written by del Toro and Vanessa Taylor and set at the height of the Cold War, the film finds Sally Hawkins' mute Elisa – a cleaning-staff employee at a Baltimore-based government research facility – developing a romantic rapport with the lab's newly prized possession: a humanoid sea dweller, nicknamed “The Asset,” who resembles the Creature from the Black Lagoon after a lifetime of five-minute-ab workouts. Theirs, it should go without saying, is a forbidden love, at least by the lab's resident torturer Richard Strickland (Michael Shannon), who believes the key to this miraculous discovery can only be found through a complete and thorough vivisection. Can Elisa and her motley team of allies (best friend Richard Jenkins, co-worker Octavia Spencer, empathetic scientist Michael Stuhlbarg) free the imprisoned Asset before Strickland can wield the knife? Can Elisa and her equally devoted companion share any kind of land- or sea-based happiness? Can del Toro possibly be serious about all this? 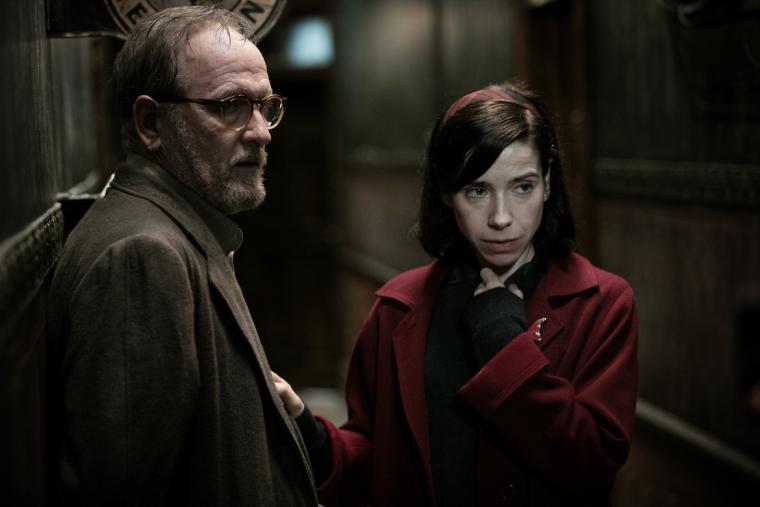 He is, bless him, and so sincere about the romantic possibilities that his film handily transcends silliness and ickiness; when the naked Elisa embraces her scaly paramour, you're more likely to swoon than wince (or giggle). Ever the visual maestro, del Toro produces scenes between his leads almost unparalleled in their fantasy-logic magic: an underwater communion in a wholly flooded bathroom; a black-and-white musical number with The Asset as nimble as Astaire. And with the creature played by human actor Doug Jones, we're given that marvelous sense of tactility that wouldn't have been possible under even the finest of CGI circumstances. With Hawkins and Jones both deprived of verbal dialogue, their portrayals are required to be purely physical ones, and they connect with intense beauty, honesty, and thoughtfulness whether silently sharing a meal of hard-boiled eggs or performing acts of romantic selflessness to shame King Kong. I just wish, given the obvious talent and imagination of everyone involved with The Shape of Water, I wound up feeling more about it.

On a production level, I was most assuredly wowed, with cinematographer Dan Laustsen's rich lighting effects fully complementing the extraordinary production design, which is somehow both period-appropriate and utterly fantastical. (Entire thesis papers can, and likely will, be written on the symbolic employment of the color green in nearly every sequence, a hue that one character references with “That's the future now – green.”) On a performance level, the film is superb, with Hawkins' impassioned melancholy and ardor made lyrical by the more down-to-earth, no-less skilled work of Jenkins, Spencer, Stuhlbarg, and Shannon, the latter of whom transforms a potentially one-note heavy into a veritable opera of malicious intent.

Operas, however, are meant to hit you on a gut level. And gorgeous though it is, del Toro's latest never got me in the gut, partly because of the paint-by-numbers plotting, and primarily because I was constantly reminded of its artfulness. (The movie isn't necessarily self-congratulatory, but it never lets you stop seeing the man behind the curtain.) Directorially, del Toro's presence here is so strong that you become less an audience member than a connoisseur of craftsmanship. You're aware of the endless green because del Toro goes overboard ensuring that you don't miss its significance, and when the mismatched lovers embrace underwater, a response that should be “How romantic!” instead becomes “What a cool shot!” To be sure, I admired the hell out of The Shape of Water. Yet watching the movie the first time, I felt strangely removed from the experience, as though I were viewing the contents of an aquarium rather than images on a screen. I'll certainly give it another go when it arrives in our area, though, because no film this teeming with delights should leave anyone feeling empty. 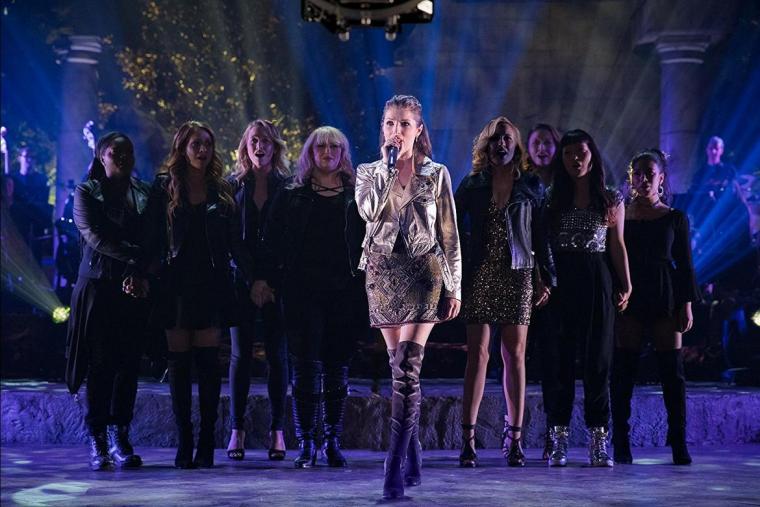 After the Barden Bellas lose yet another pop-mash riff-off in Pitch Perfect 3, Anna Kendrick's sardonic heroine Beca tells a new acquaintance, “I don't know why we keep challenging people to those. We never win.” That's a nicely self-aware moment in a sequel that seems profoundly unaware of how tired its auto-tuned schtick has become. Barring the subplot that finds Rebel Wilson's Fat Amy transformed, unconvincingly, into an action-comedy ass-kicker á la Melissa McCarthy in Spy, crashing through ceilings and evading fireballs in slow motion, it's business as usual in director Trish Sie's third, purportedly final installment in the comedy franchise: more a cappella competitions (the ones here taking place during a USO tour), more halting romantic entanglements, more condescending sarcasm from Elizabeth Banks and John Michael Higgins. (A strangely unanswered question even after three films: Why does this pair hate the clearly talented gals so much?)

But none of it has the enthusiasm of the 2012 original – we aren't even given the deliberately replicated faux enthusiasm of 2015's lackluster Pitch Perfect 2 – and everyone involved seems ready to pack it in from the start, making the absent Skylar Astin, Adam Devine, and Ben Platt ultimately seem like the series' wisest participants. Thankfully, Kendrick, Wilson, Anna Camp, Brittany Snow, and Hailee Steinfeld have so much natural charm and charisma that they're able to score a few laughs and smiles despite the weak material, and it was refreshing to see Ester Dean, Hana Mae Lee, and Chrissie Fit get a little more screen time as fellow Bellas. (Even the glorified Bella extras played again by Kelley Jakle and Shelley Regner are allowed to speak, albeit for one whole sentence apiece.) Yet despite John Lithgow doing a broad Aussie accent and DJ Khaled repeatedly showing up as himself – Kay Cannon's and Mike White's script employing “DJ Khaled” with the frequency of “the” and “and” – Pitch Perfect 3 is a formulaic, uninspired drag notable mainly for Fat Amy's bright red baseball cap proclaiming “Make America Eat Again.” Finally – a political sentiment we can all get behind.

For reviews of All the Money in the World, Downsizing, and Father Figures, visit “From Getty to Gag-Me.”