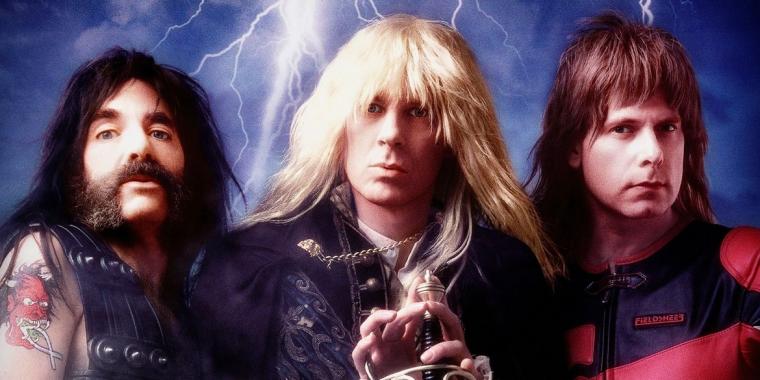 Harry Shearer, Michael McKean, and Christopher Guest in This Is Spinal Tap

It's easy, these days, to feel almost pathetically grateful for whatever public-entertainment opportunities we're given: live-music venues hosting performers outdoors; art galleries allowing socially-distanced exhibit viewing; drive-ins. (Prior to 2020, whoever thought those would make such a staggeringly well-received comeback?) All of these things are fantastic and deeply welcome. But it's also just as easy, these days, to feel continually thwarted and depressed. Just yesterday, in the midst of a perfectly pleasant afternoon, an e-mail landed saying that the comedy-rock heroes of Tenacious D – who were booked at Davenport's Adler Theatre at the end of September – had officially canceled their fall tour. If Jack Black and Kyle Gass can't save us from this awful awful year, I'm not sure who can.

Giving up, however, is for the weak! So as we continue to wait for large, semi-large, and even intimate public-entertainment venues to safely open again, here are a few more home-viewing favorites from my nostalgia cabinet: five – well, make that six – excellent works from 1979 to 1992 all focused on the business of show, with different titles for different nostalgic moods. I'd completely understand if you've only seen one of these. But you'd better have seen the one I'm referring to. Don't disappoint me or the world's loudest band. 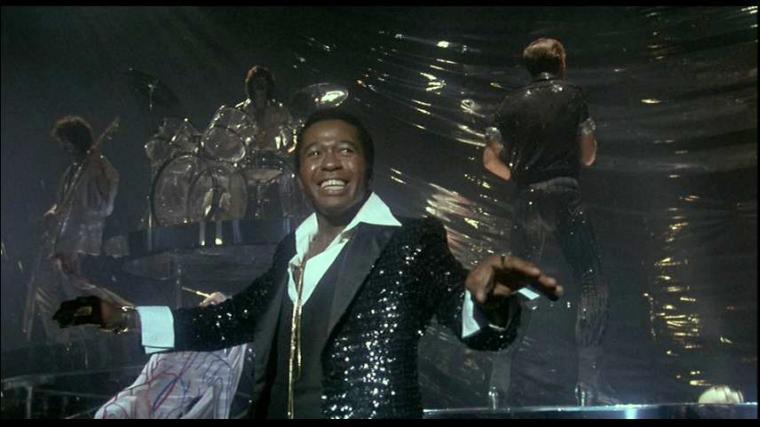 If you miss stage musicals – All That Jazz: Hands down, the best musical ever to feature an open-heart surgery sequence. Actual, honest-to-God, documentary-style open-heart surgery, with the camera getting right in there as the scalpel makes incisions. You'd think the rest of Bob Fosse's largely autobiographical Oscar winner would be a lot easier to watch. But it's really only slightly easier, given that Fosse proxy Joe Gideon is like a walking advertisement for the perils of smoking, drinking, adultery, boundless ego, and chatting up Jessica Lange. As played by a never-finer Roy Schieder, Gideon is also positively electrifying, and so is this 1979 classic – a warts-and-all self-examination bold enough to foretell the director/choreographer's own death and cheeky enough to make his passing look like a blast. Last year's fabulous mini-series Fosse/Verdon took a deeper dive into the Cabaret helmer's personal and professional lives. Yet while All That Jazz is five hours shorter, it might boast even more exhilarating choreography, and anyone hungry for exuberant theatrical dance needs to watch the 20-minute finale that imagines Fosse's memorial service as an über-glitzy variety show complete with flashing lights, smoke effects, and Ben Vereen. And for equal albeit more subtly composed exhilaration, check out 12-year-old Erzsebet Foldi and the iconic Ann Reinking in their “Everything Old Is New Again” duet. You might easily gasp – and not just because Reinking makes freaking bell bottoms sexy. Show-biz-iest scene: Despite much competition, I gotta go with the rehearsal at which Fosse and his dancers present snippets of their jazzy “Take Off with Us” number to Broadway producers, who love it – and then hate it after the performers strip down to their dance belts and turn a frisky number into a wildly erotic one. Clearly, such raciness was not what those money men paid for. But it's definitely what we paid for. 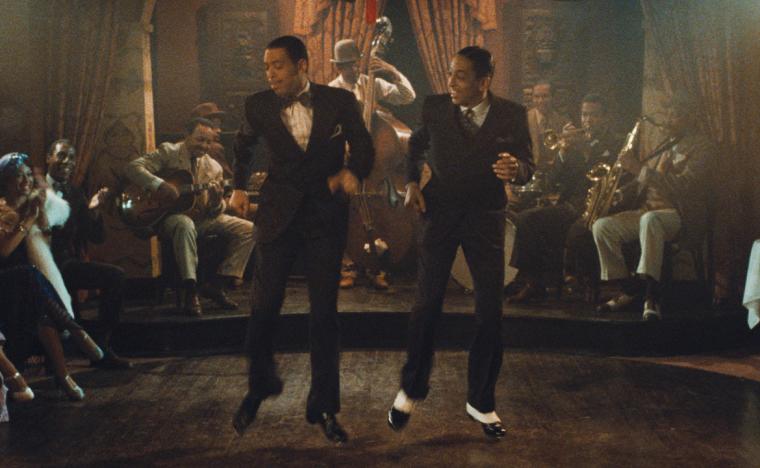 If you miss nightclub entertainment – The Cotton Club: In the winter of 1984, long before the Christmas-movie season became the province of families, we high-schoolers only had a handful of conceivable cineplex choices: Beverly Hills Cop; the sci-fi sequel 2010; David Lynch's Dune. (Not that anyone I knew, including this eventual Lynch fanatic, would've been caught dead at that one.) So it probably says something about the times, and certainly says something about me and my friends, that the one movie we wound up catching repeatedly was Francis Ford Coppola's gangster/show-biz drama set in and around the legendary Harlem nightclub of the 1920s and '30s. Who needs a new Star Wars or Lord of the Rings or Jumanji when you've got Lonette McKee crooning “Stormy Weather” and Richard Gere pretending to play jazz trumpet? Considering the titular venue didn't showcase white musicians, top-billed Gere is part of why The Cotton Club is problematic, with his narrative – one involving Diane Lane as Gere's lover and Nicolas Cage as his hot-head brother – sitting rather awkwardly beside all those glorious nightclub numbers. But wow are they glorious, with the divinely soulful McKee also killing it on the torch ballad “Ill Wind,” Larry Marshall channeling Cab Calloway on “Minnie the Moocher,” and dancing brothers Gregory and Maurice Hines making demanding tap numbers look as simple as tying your shoes. Remember when clubs let performers and audiences dance? How did we all wind up in a globe-spanning production of Footloose?! Show-biz-iest scene: They're not quite as legendary as Cotton Club performers the Nicholas Brothers (sweet Heaven, who could be?), but when the Hines siblings unleash their spirited dueling-hoofers routine that ends in a loving hand clasp, damned if you're not reminded that virtuoso tap might be both the happiest sight and happiest sound in the history of live entertainment. Tap this! 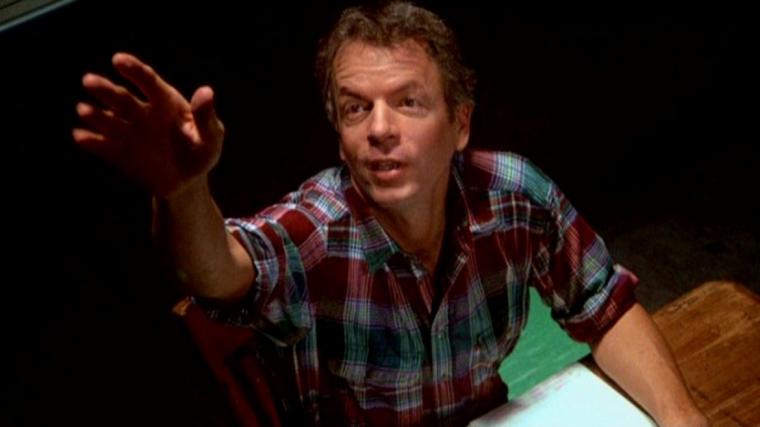 If you miss intimate theatre – Monster in a Box and Swimming to Cambodia: I long for the days of grandly-scaled theatrical productions with audience members numbering in the hundreds. Even more, though, I miss sitting nearly shoulder-to-shoulder alongside a few dozen strangers for less lavish, less populated stage offerings – the sort that might wind up theatre fans' only options for the next several months. (I offer no apologies for this blatant plug for Moline's Black Box Theatre and its July 16-19 run of The Turn of the Screw: the Quad Cities' first new stage show in four effing months!) Solo pieces in which performers can only spit on themselves, in truth, may be a way to go. But until someone decides to exhume the spirit, if not the body, of the beloved monologuist Spalding Gray, at least we have the man's Monster in a Box and Swimming to Cambodia committed to celluloid – 90-minute one-man-shows, both filmed in front of live audiences, that prove as powerfully spellbinding as Hamilton from front-row seats. (You know … almost.) Thunderously well-directed by Jonathan Demme, 1987's Swimming, like all of Gray's monologues, is about a little of everything, but primarily the artist's consciousness-expanding experiences while filming Roland Joffe's war drama The Killing Fields. Director Nick Broomfield's 1992 Monster, meanwhile, is a more blithe, pop-culture-themed affair concerning an epically long novel, flying saucers, and the impossibility of finding caffeinated coffee in Russia. They're both essential viewing for fans and newbies alike: engrossing, moving, hilarious black-box theatre that fits ideally on your black-or-whatever-color screen at home. Show-biz-iest scene: Even those with no acting experience whatsoever will have to cringe, and laugh, when Monster in a Box finds Gray reciting passages from his most devastating pans as Thornton Wilder's Stage Manager in Broadway's 1988 revival of Our Town. Jeez, we reviewers can be so bitchy sometimes … ! 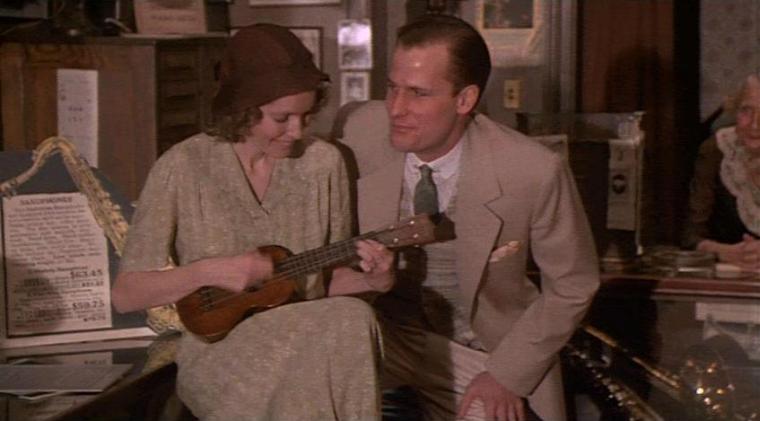 If you miss going to the movies – The Purple Rose of Cairo: Last week, in my article on oddly Oscar-ignored performers, I referenced this 1985 comedy in my write-ups on Mia Farrow and Jeff Daniels, and attached a Purple Rose of Cairo production still in conjunction with their mentions. That photo was all it took to make me nostalgic, and after an umpteenth viewing of the film, I was reminded that Woody Allen's ceaselessly delightful romantic fantasy may also be one of the most potent celebrations of the love for movies – and love of going to the movies – ever made. Purple Rose finds Mia Farrow's beleaguered Cecilia, during the Great Depression, both flabbergasted and intoxicated after one of her matinée idols (Daniels' Gil Shepherd, in character as “Tom Baxter”) literally walks off the screen and into her life. What follows is pure absurdist joy in the manner of Allen's famed short stories for The New Yorker, with the plot's hysterical complications including the fictional Tom's attempts to behave human, the aghast reactions of Gil's co-stars still trapped behind the screen, and the arrival of a second Jeff Daniels – one more neurotic and self-aggrandizing than the first, yet somehow just as sweet. What lingers most sublimely, though, in Allen's dazzling period farce is its argument for the necessity of cinema as a cure for melancholy, even if, as we're reminded, it's also an occasional cause of it. We're lucky to be able to escape reality for the simpler pleasures of fantasy. It's important to remember, however, that it's only momentary escape. Show-biz-iest scene: True cinephiles will relate to Cecilia's blissful happiness watching Baxter's black-and-white adventure-comedy three times in a row … even if our own binge-watches never ended with the film's star turning to face us directly and say, “My God, you must really love this picture.” I sure do. 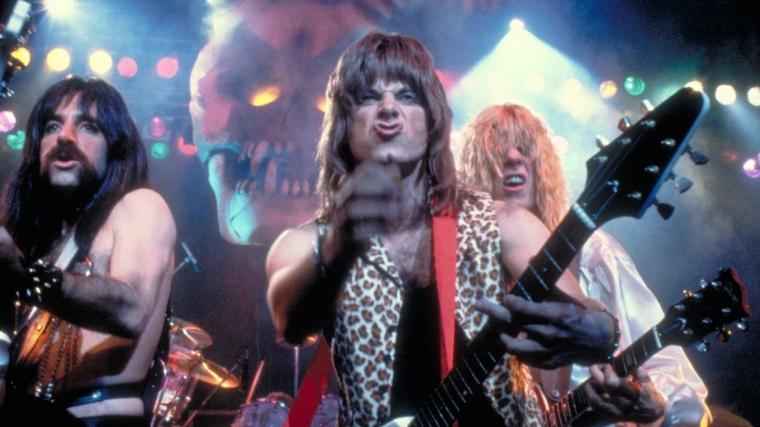 If you miss touring concert events – This Is Spinal Tap: I'd imagine most traveling musicians would currently give anything to even be on a crap tour that ended with a marquee announcing their second-billing to “Puppet Show.” In the meantime, at least they, and we, have This Is Spinal Tap – a favorite (if not the favorite) of nearly every musician I've ever known, as well as every fan of Christopher Guest, mockumentaries, Christopher Guest mockumentaries, and movies that make you glad to be alive. With our heavy-metal heroes played by Guest, Michael McKean, Harry Shearer, and an ever-exploding series of replacement drummers, it's easy to forget that this wildly influential 1984 satire wasn't actually directed by Guest, but rather Rob Reiner, who, over the next eight years, followed his feature-film debut with an almost unparalleled run of mainstream hits. But this tale of mediocre, endlessly hopeful rockers and their hardships during an increasingly desperate North American tour remains the finest film on Reiner's résumé for a simple reason: Every scene is a classic. Hell, practically every line is a classic. The album covers. The album titles. The album reviews. (Shark Sandwich? “Shit sandwich.”) The diminutive Stonehenge. The foil-wrapped cucumber. The backstage labyrinth. The Air Force gig hosted by Fred Willard. The reconciliation. The final (for now) spontaneous combustion. And, of course, Nigel Tufnel's amp. Thirty-six years after its release, Spinal Tap still goes to 11. Show-biz-iest scene: Fran Drescher's music promoter to Tony Hendra's tour manager: “Ian, you put a greased, naked woman on all fours, with a dog collar around her neck, and a leash, and a man's arm extended out up to here holding onto the leash, and pushing a black glove in her face to sniff it. You don't find that offensive? You don't find that sexist?” Hmph. Promoters. They just don't get rock 'n' roll.